Visitors to the Croatian coast spoiled by a variety of peaceful islands and spectacular beaches – are overseen by a small army of lighthouses. Lighthouses in Croatia hold a special place in many hearts. They fascinate with historical stories as well as their magnificent but often lonely surroundings. Characterized by charm, dignity, and security. The attractiveness of the lighthouses and their centuries-old purpose continue to be an inspiration to travelers, storytellers, and artists. Even when many have stopped working or have been abandoned.

Harmonious, timeless, mystical, and fascinating, we can use these words to describe lighthouses in Croatia. Isolated and remote from the rest of the world. These monuments of time hide great secrets and they are places full of history that attracts with its atmosphere and mystery. Each of them, from Istria to Dalmatia, hides a unique and beautiful story. Since they are completely isolated, they provide invaluable peace. A silence that is hard to experience, and complete enjoyment of nature and the sea. Spend a romantic vacation in one of the lighthouses in Croatia. You can’t live in them, but you can spend a unique and memorable vacation. Take a look at the most beautiful sea monuments on the Croatian coast. 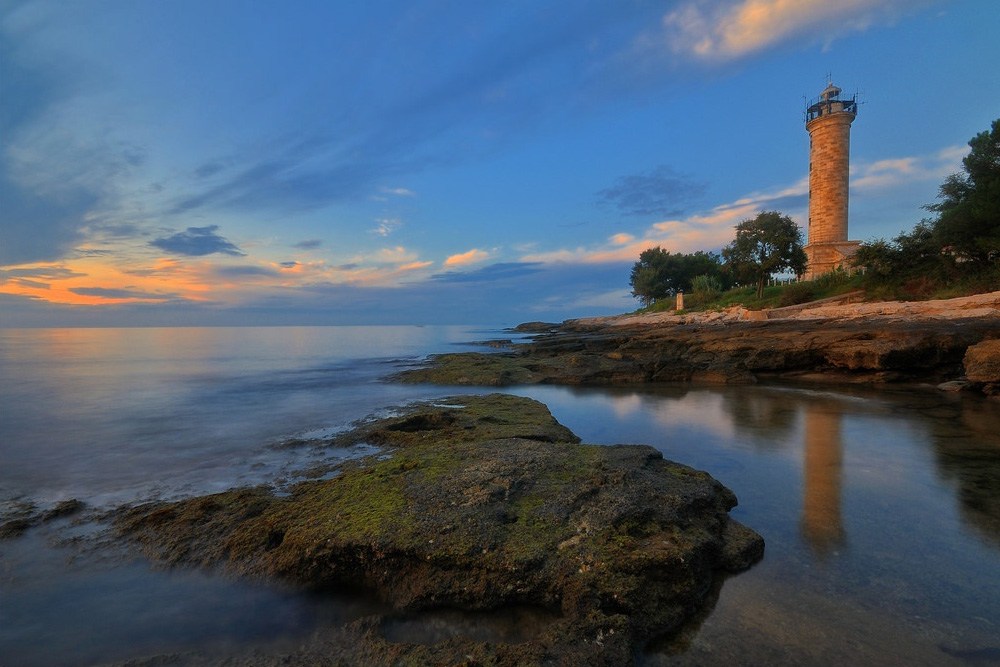 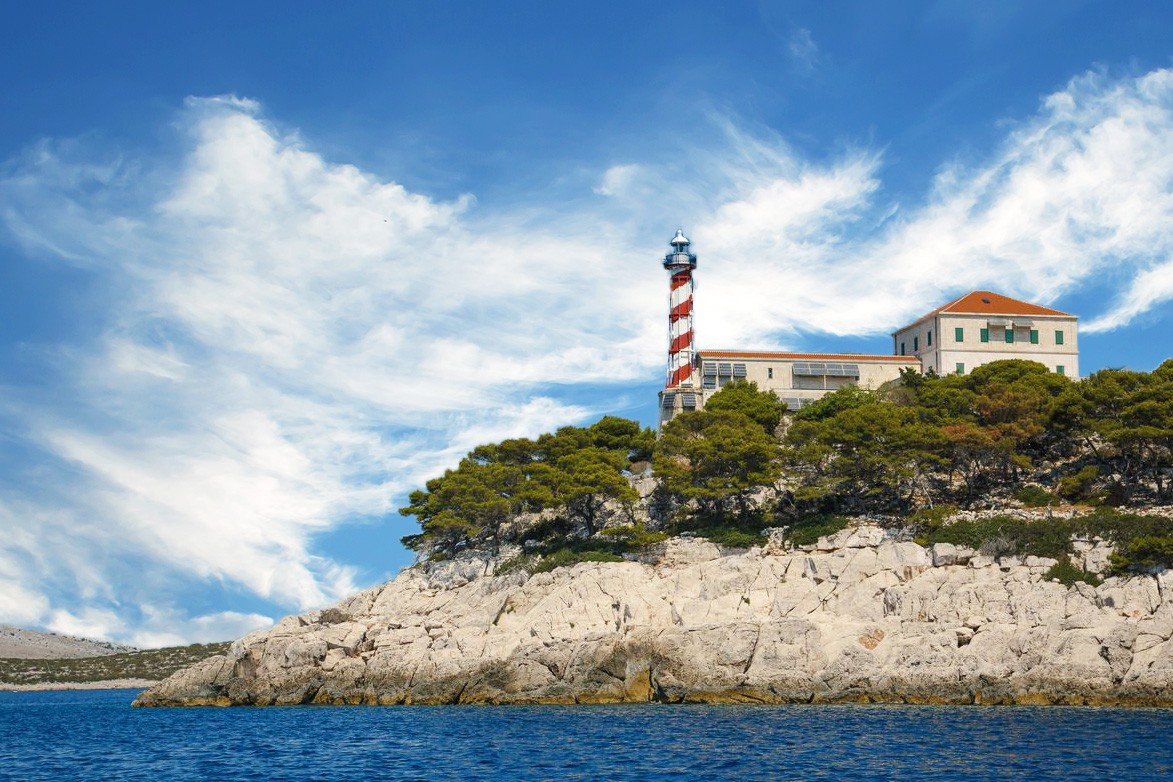 Located on the island of Sestrica Vela on the edge of the Kornati National Park and the Telašćica Nature Park. Tajer is special in many ways. It stands out from other Croatian lighthouses for its specific appearance and method of construction. Very reminiscent of lighthouses in the north of Scotland. The beautiful stone building connected to the monumental iron tower forms a distinctive style of a lighthouse, which has no competition on the Adriatic. The lighthouse is in a pine forest and surrounded by a large courtyard. Built in 1876, and bought in France Tajer is the only lighthouse with an iron tower on the Adriatic. Apart from metal construction, the lighthouse tower is special because of the red and white spirals. Which also makes the lighthouse stand out from the rest. 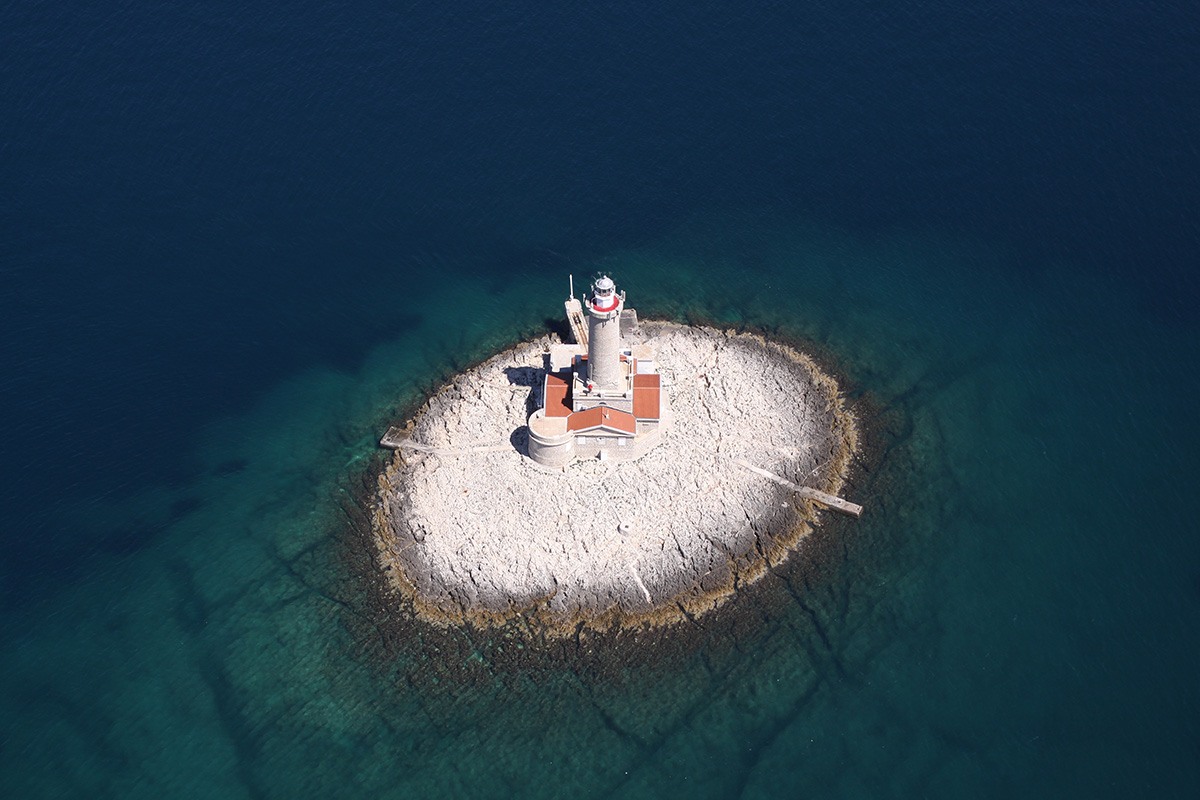 Porer Lighthouse is located on the small rocky islet of the same name, 80 m in diameter. On the southernmost island of Istria. Built back in 1833 in the middle of the islet in the shape of a round stone tower 35 meters high. The seabed around the islet is very attractive for divers because there are many shipwrecks in the wider area of ​​the islet. Due to the constant mixing of hot and cold sea currents, the seabed around the islet of Porer is also rich in the fish population. Around a wider area, you can found up to 90% of fish species in the Adriatic. The sunset from the lighthouse is one of the most beautiful in Croatia. And on a nearby cliff, allegedly it is possible to see the footsteps of dinosaurs as well. 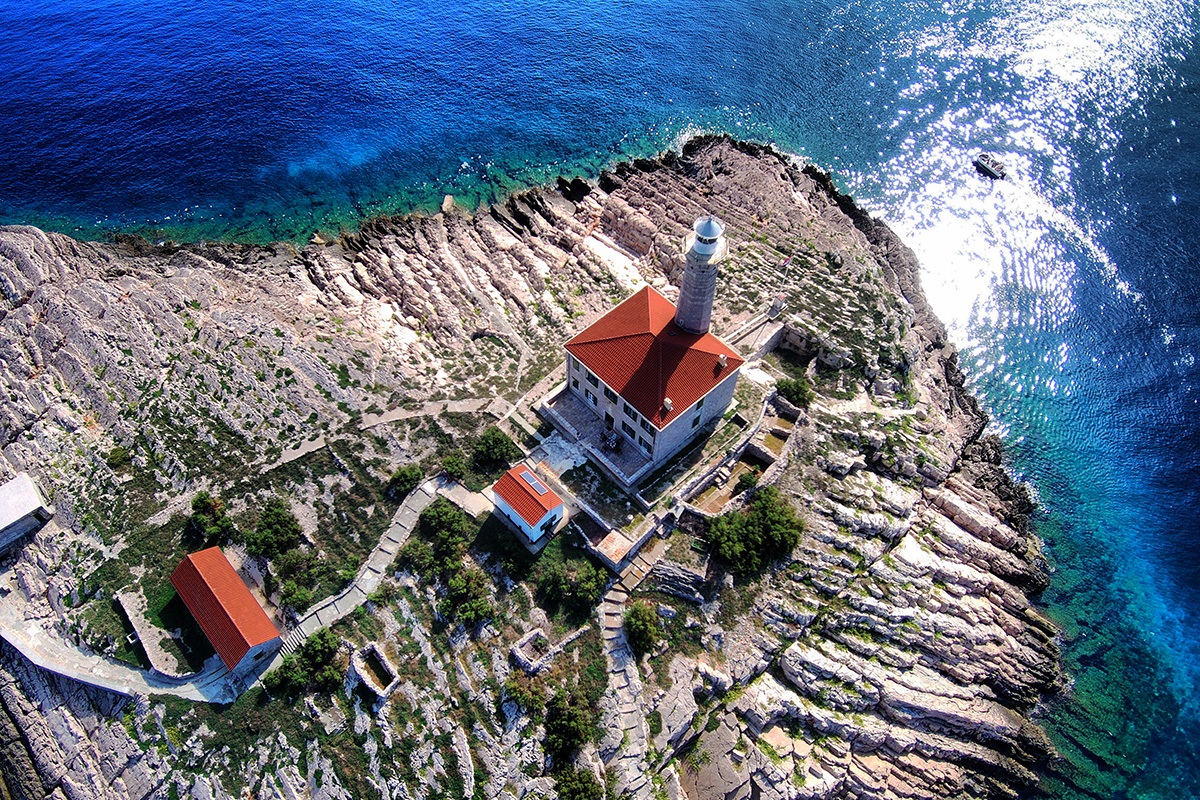 South of the island of Žirje, three nautical miles towards the open sea, there is a lonely cliff. Perhaps this cliff would not be so special if it did not have one of the most beautiful lighthouses on the Adriatic.  Built on the island of Blitvenica in 1872 by the Austro-Hungarian Empire. Known as a rocky island, Blitvenica is difficult to access. Around the island, there are deep-sea abysses. Where even today there is an abundance of fish. The Blitvenica lighthouse consists of a stone building and a tall octagonal stone tower. When you come to Blitvica you feel great awe, harsh conditions and unforeseen circumstances are constant on the island. The lighthouse building is abandoned since the automation of the lighthouse. The lighthouse is well preserved and awaits renovation, as its location is interesting and attractive to scientific tourists. 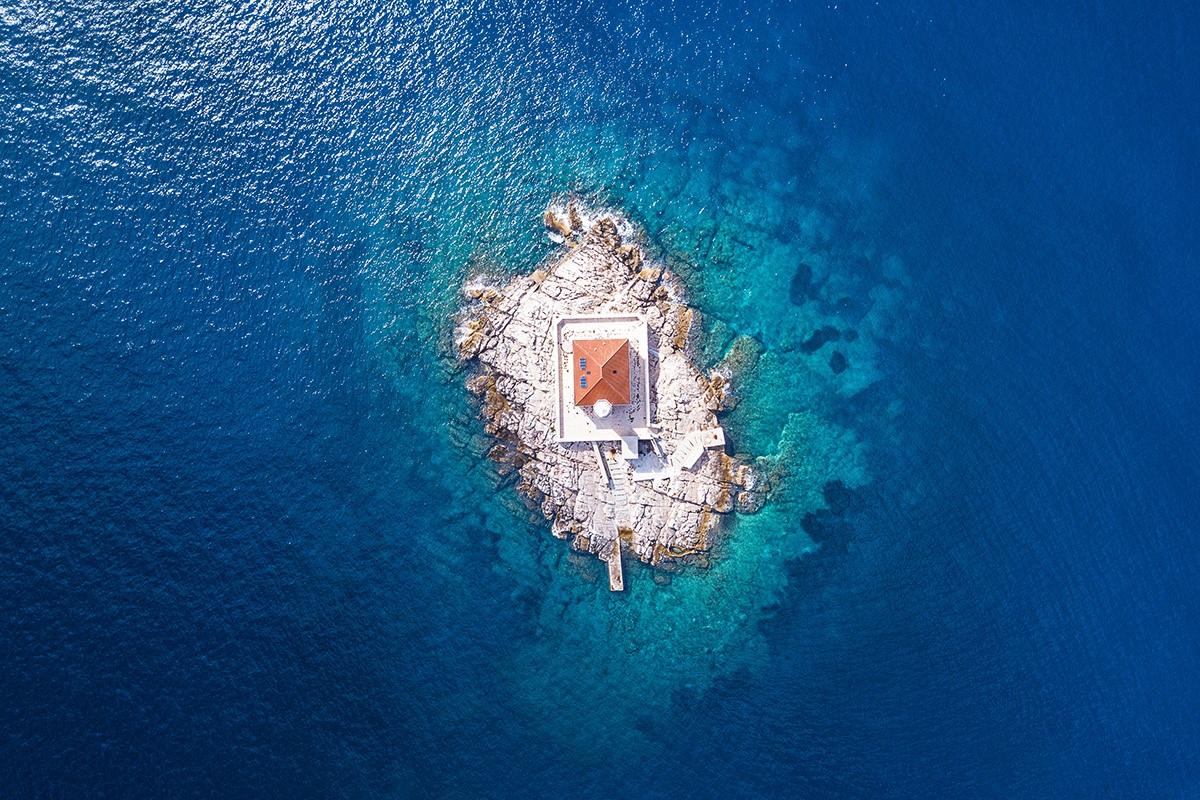 Raised from the sea near the Adriatic pearls of Rogoznica and Primošten, the Mulo lighthouse is located on a small cliff. It is one of the most prominent lighthouses on the Croatian coast and is considered one of the most attractive on the Adriatic. In 1873 the Austro-Hungarian Navy built the lighthouse. This distinctive lighthouse looks like a fortress on a small cliff with a large stone courtyard. Which has resisted the rage of wind and waves for 147 years. The lighthouse exudes timeless, poetic, cruel, and yet unreal beauty. Like most lighthouses in Croatia, it is automated and unmanned. Mulo is also known for its sunsets. Which attracts artists, photographers, and true lovers of the sea with its amazing colors and the view of the gorgeous coastline that surrounds it. 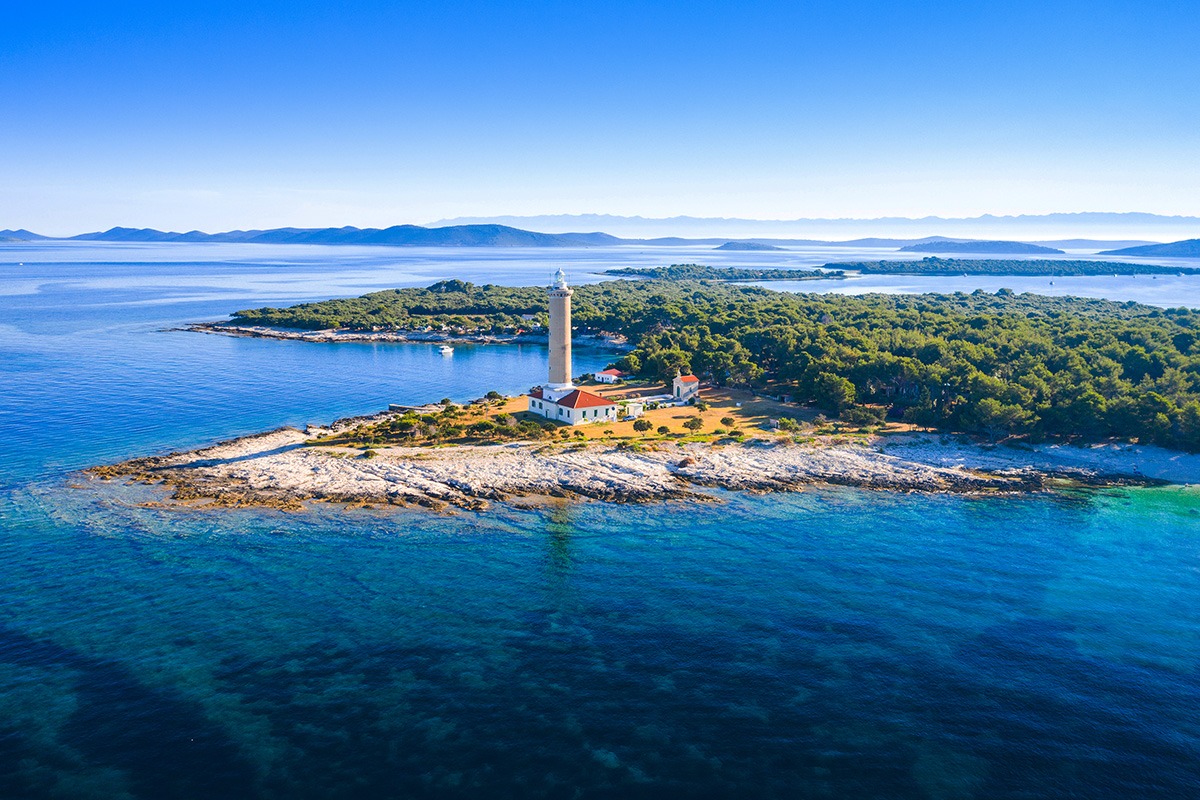 The magnificent lighthouse Veli Rat was built in 1849, its 42 meters high and today is the tallest lighthouse on the Adriatic. It is located on the northwestern cape of Dugi Otok, 35 km west of Zadar. Surrounded by pine forests, magical beaches, and beautiful bays. It is considered one of the most wonderful lighthouses in Croatia. From the high tower, there is a truly magical and spectacular view, which will remain an unforgettable memory for everyone. In the courtyard of the lighthouse, there is a small chapel of St. Nicholas, the protector of sailors. Where traditionally romantic weddings are held. The lighthouse offers two apartments, with rooms overlooking the sea. The keeper lives in the lighthouse with his family, who is available for the needs of the guests. 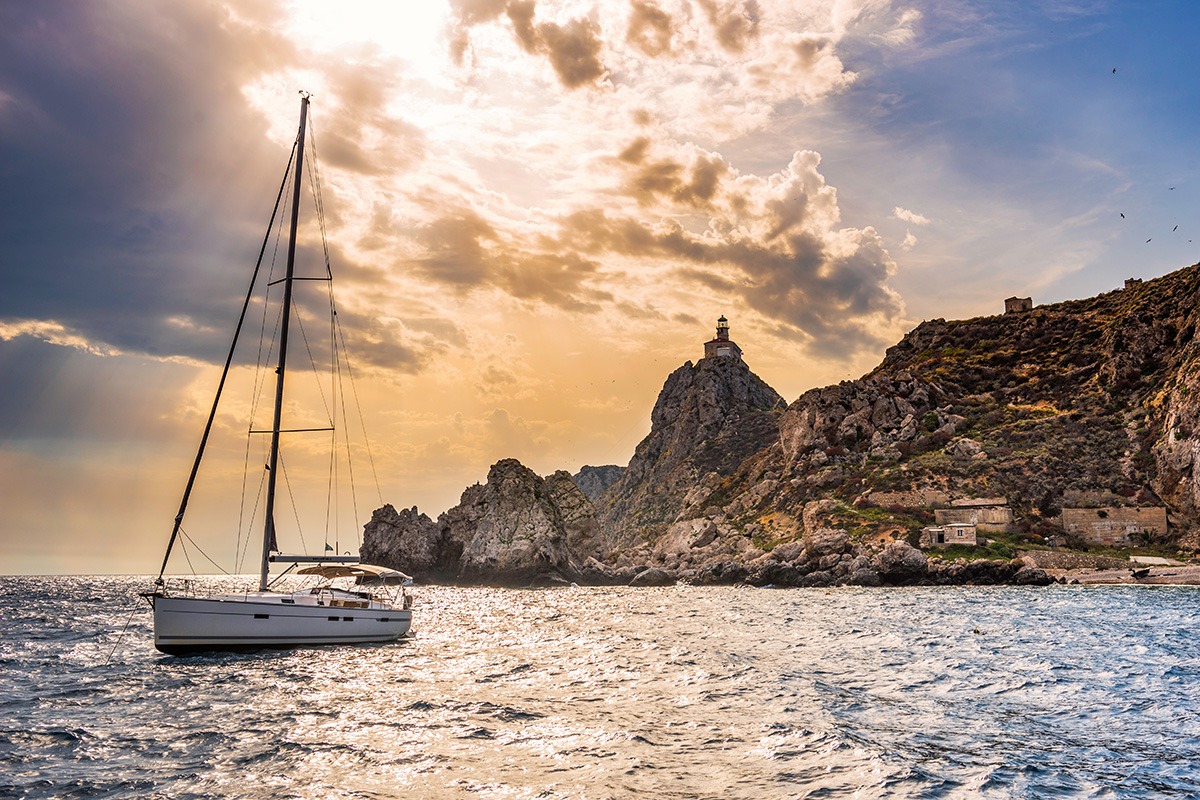 In the center of the Adriatic Sea, halfway between the Croatian and Italian coasts is the island of Palagruža. The most distant Croatian island and the most distant point of light on the waterway across the Adriatic. The Palagruža lighthouse was built in 1875 on the island of the same name and is the largest building of that type on our side of the Adriatic. So far from the mainland, the lighthouse leaves the impression of a temple built for the Adriatic Sea. Salvation, and last hope for the lost fisherman and sailor. The island of Palagruža and its lighthouse is something special and invaluable for Croatian cultural heritage. Due to its historical importance, archaeological sites, and specific flora and fauna, both on land and underwater. The island is a nature reserve with endemic plant and animal species. 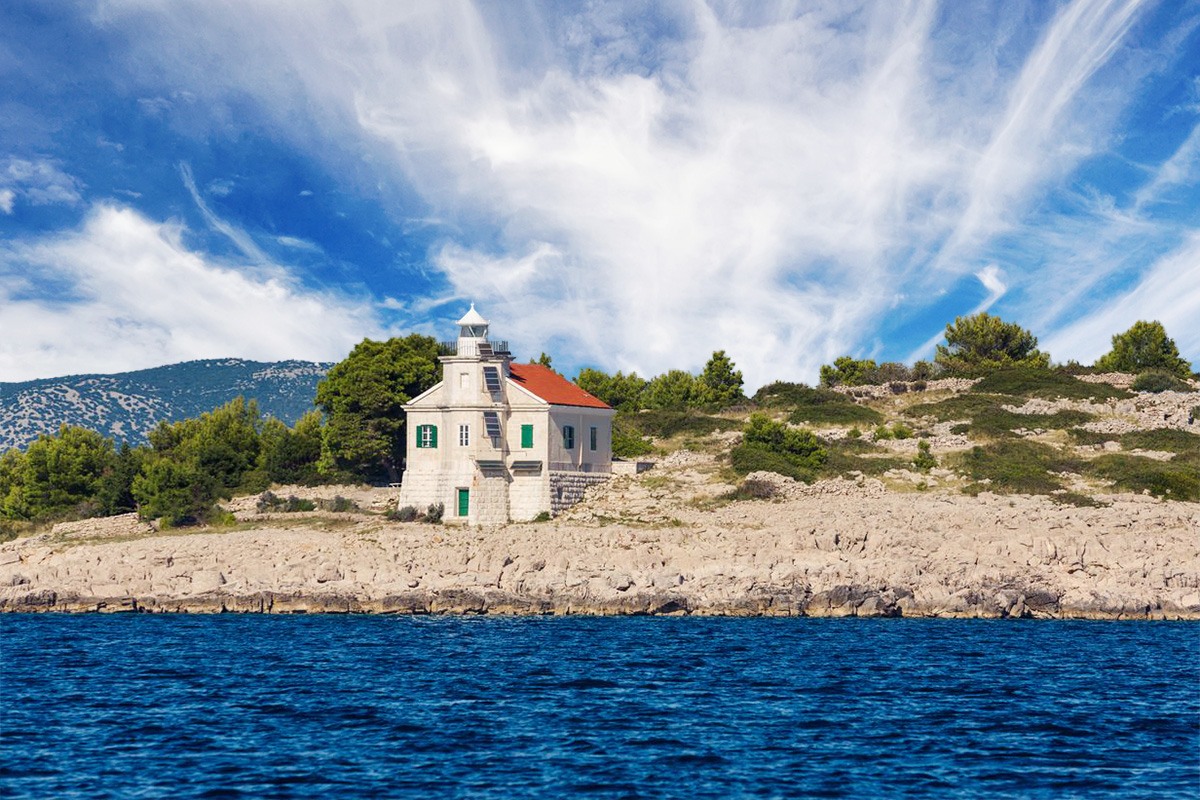 Prišnjak is one of the most picturesque islands near Murter and everything you could imagine as a lighthouse. With lines of stone walls all over the small island like a cobweb, with some pine and fig trees, it perfectly shows the tradition and character of Dalmatia. Prišnjak is certainly one of the most beautiful islands near Murter. Built in 1886, the Prišnjak lighthouse’s purpose was to make it easier for sailors to orient themselves at night when entering the Murter archipelago. The lighthouse building also has a beautiful stone terrace and is only a few meters away from the beach and a small harbor. It is important to note that Prišnjak is one of the most popular lighthouses in Croatia. Accommodation capacities are filled at least 6 months a year, so if you are interested, be sure to book on time. You can search for it on Visitteo. 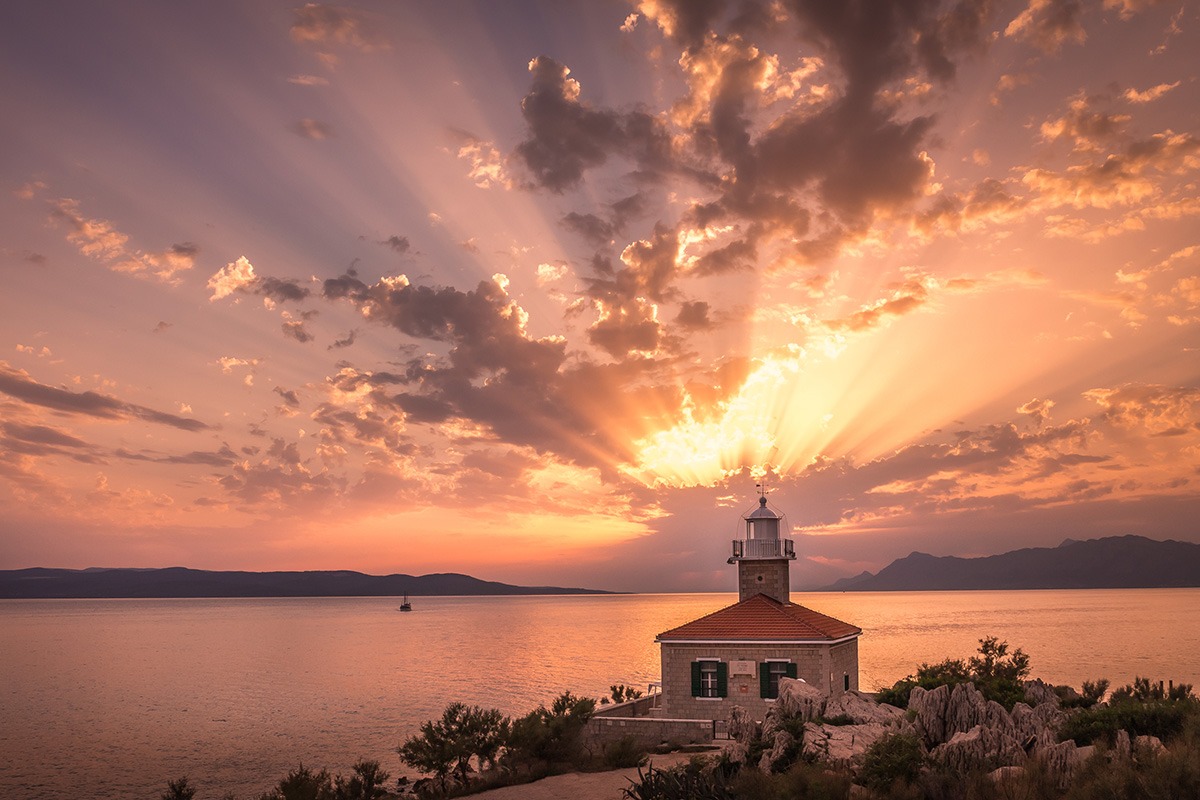 The lighthouse, built on the peninsula of St. Peter. On a site that in ancient times has a significant role in the control of navigation in this part of the Adriatic. Thanks to the beautiful coast, the crystal clear sea, and the mountain Biokovo in the background, it really looks like part of paradise. Although it’s not on an isolated and rugged island, this lighthouse is located in a secluded part of the peninsula near Makarska, a 20-minute walk from the city center. Surrounded by some of the most beautiful beaches in the area, which adds to its charm and allure. Lighthouse St. Peter is in an ideal position, like on the palm of your hand you can see Makarska with a kilometer-long pebble beach, the impressive mountain Biokovo in the north, and the picturesque islands on the south side. 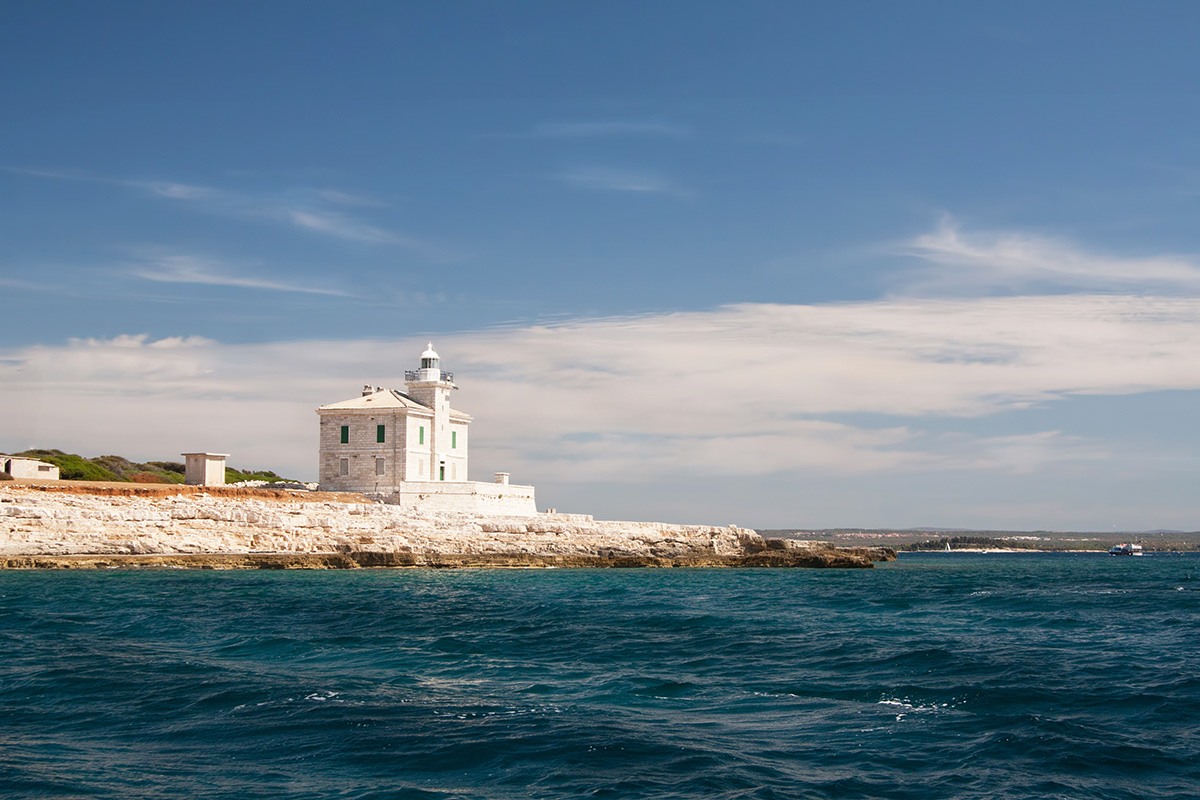 Built in 1877, Rt Peneda lighthouse is located on the southern end of the island of Veli Brijun. One of the fourteen Brijuni islands that have always impressed with their beauty. Although small, the lighthouse with a stone house and a square tower under the blazing sun looks like a marble monument, and with its glitter attracts views from the sea. Its location and appearance do not belong to the category of more attractive lighthouses. Nevertheless,  Rt Peneda tells stories of a turbulent past in its surroundings, as it has witnessed many historical events. Like most lighthouses in Croatia, it’s automated and has no permanent crew, it is included in the remote monitoring system. But still stands with dignity and guards over Brijuni and the main sea route to Pula.