The island of Korčula, rich in vineyards, olive groves, and cultural heritage. An island that also has a magnificent old town, is the sixth-largest Adriatic island. Which stretches almost 47 km in length. The tradition is still alive and ubiquitous on Korčula. Eternal religious rites, folk music, and dances continue to be performed to the delight of the growing influx of tourists. The jewel of the island is undoubtedly the town of Korčula. A collection of exceptional Venetian-Gothic architecture on a narrow peninsula. Korčula enchants with its timeless beauty. Past times have left their mark on the stone that speaks. The island is proud of the living traditions he nurtures.

The island of Korčula has been inhabited since prehistoric times. And traces of ancient life have been discovered in many places. In the 6th century BC, the island was inhabited by Greeks. In the 1st century AD, the island, like the whole of Dalmatia, was conquered by the Romans. Around the 7th century, Croats penetrated the Adriatic coast and soon established their state. Korčula has long been under the rule of the Republic of Dubrovnik, then Venice and Austria. 1806 Korčula was conquered by Napoleon, then by the English, and Austro-Hungary, under which it remained until the end of World War I. It was later conquered by the Italians and the Germans. After the disintegration of Yugoslavia, it remained a Croatian jewel on the Adriatic. The turbulent history of Korčula has remained written in stone and is visible on every piece of this unique island. 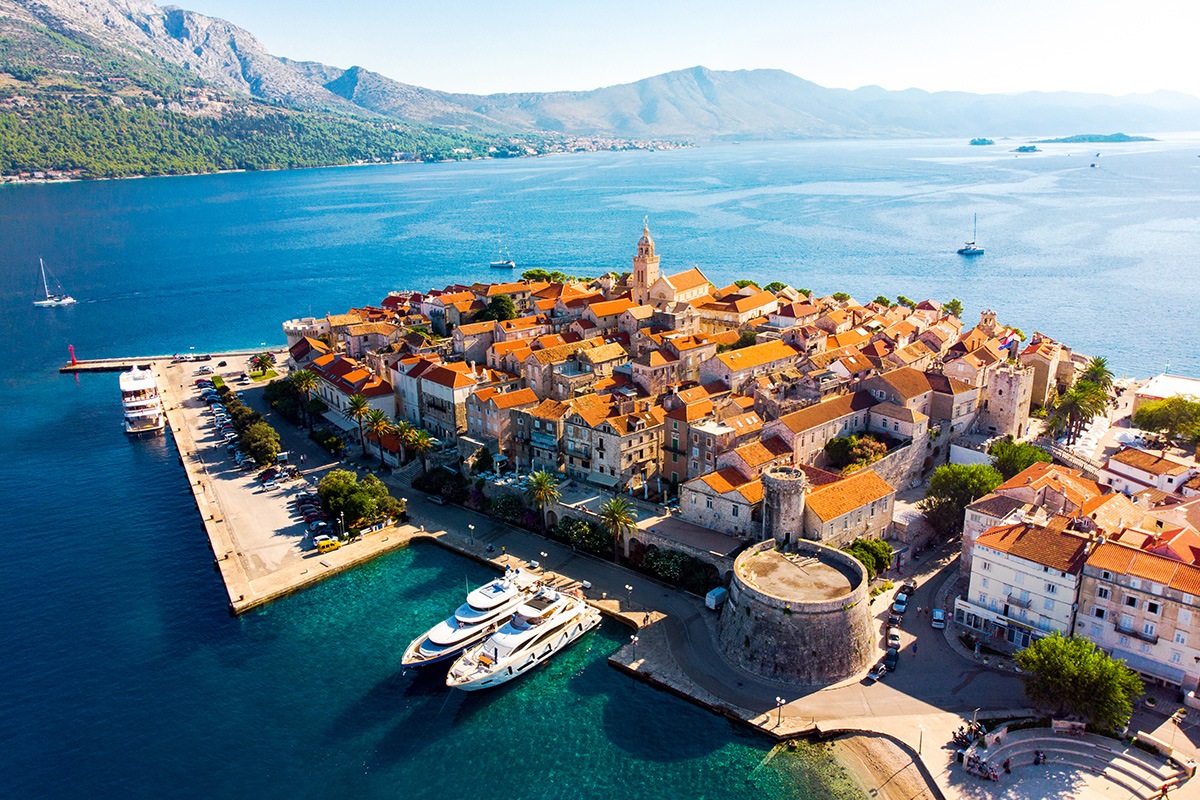 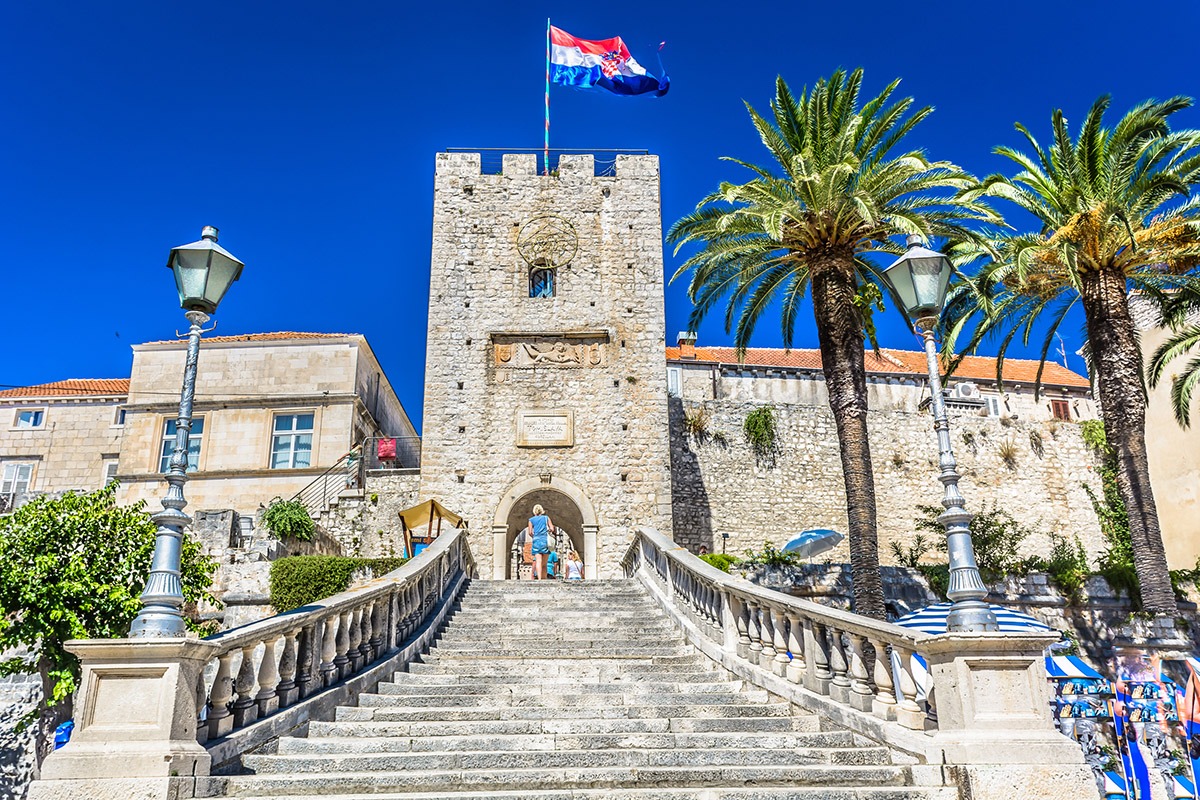 The rich and interesting culture will keep you on this island for a long time. Due to the specific layout of stone streets in the shape of herringbone, as well as old walls, beautiful old palaces, and cathedrals, the town of Korcula has been included on the prestigious UNESCO list. The locals proudly celebrate their heritage with knightly games like the famous Moreška. On the List of Protected Cultural Heritage of the Republic of Croatia, along with moreška, there is also a dance of sword colors – Kumpanija. Within the walls of the Old Town, people live in an “open-air museum”. You can visit the Gothic-Renaissance Cathedral of St. Mark, the Abbey Treasury, the City Museum, the Marco Polo Interpretation Center, the Revelin Tower, churches, and galleries. 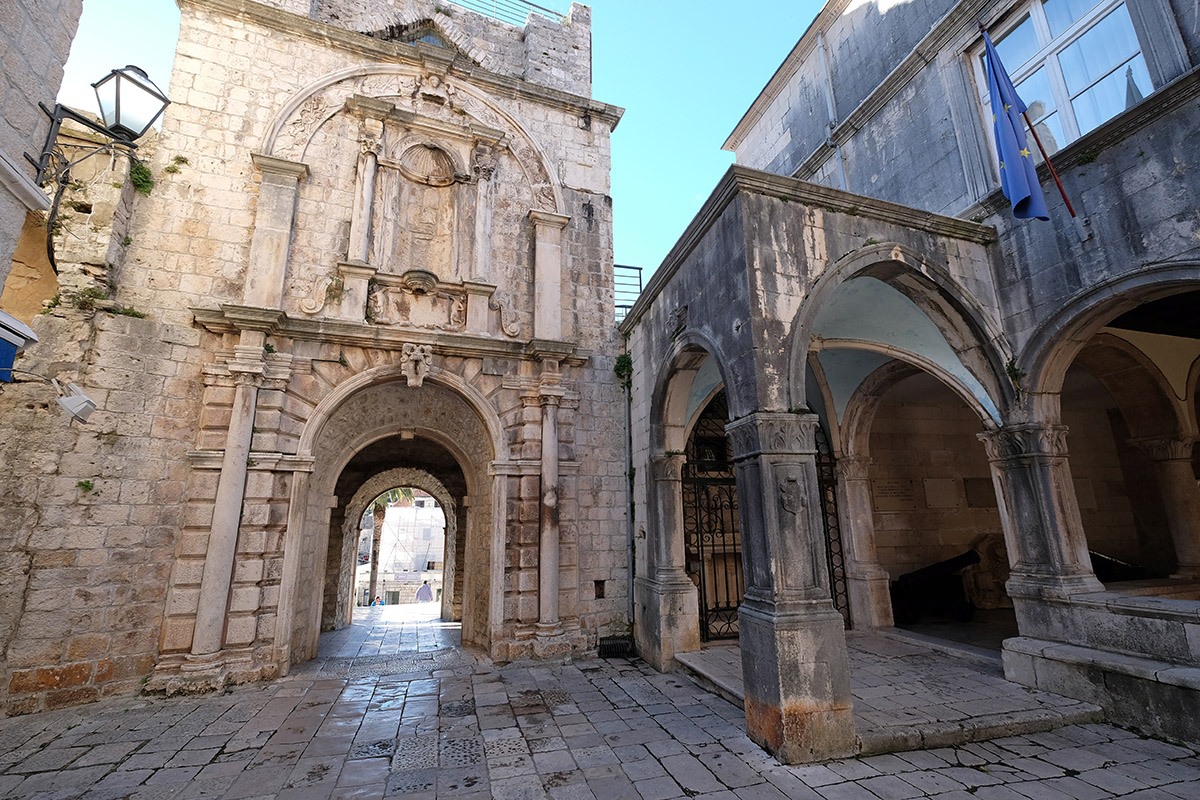 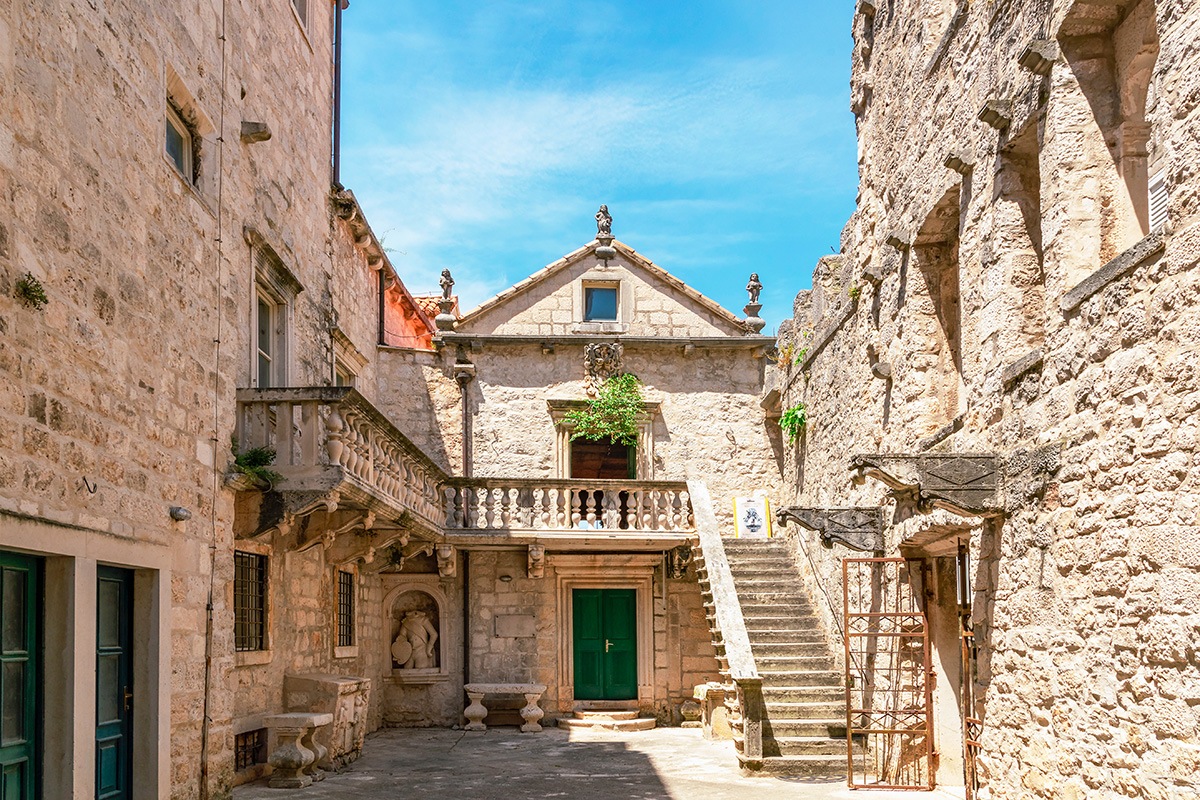 The town of Korčula

Korčula is a historic fortified town on the east coast of the island of Korčula. The town of Korčula is planned so that there are west and east sides of the town. On these two sides, the town is divided by the main street that runs right through the center of the town. It is primarily built so that there would be an excellent defense against various attacks. The town of Korčula has a geographical position that was ideal for defense. And a nightmare for all those who tried to attack and conquer this town throughout history. The city is surrounded by walls, towers, fortifications, and this lets us know that this city has historically played an important role for various rulers. 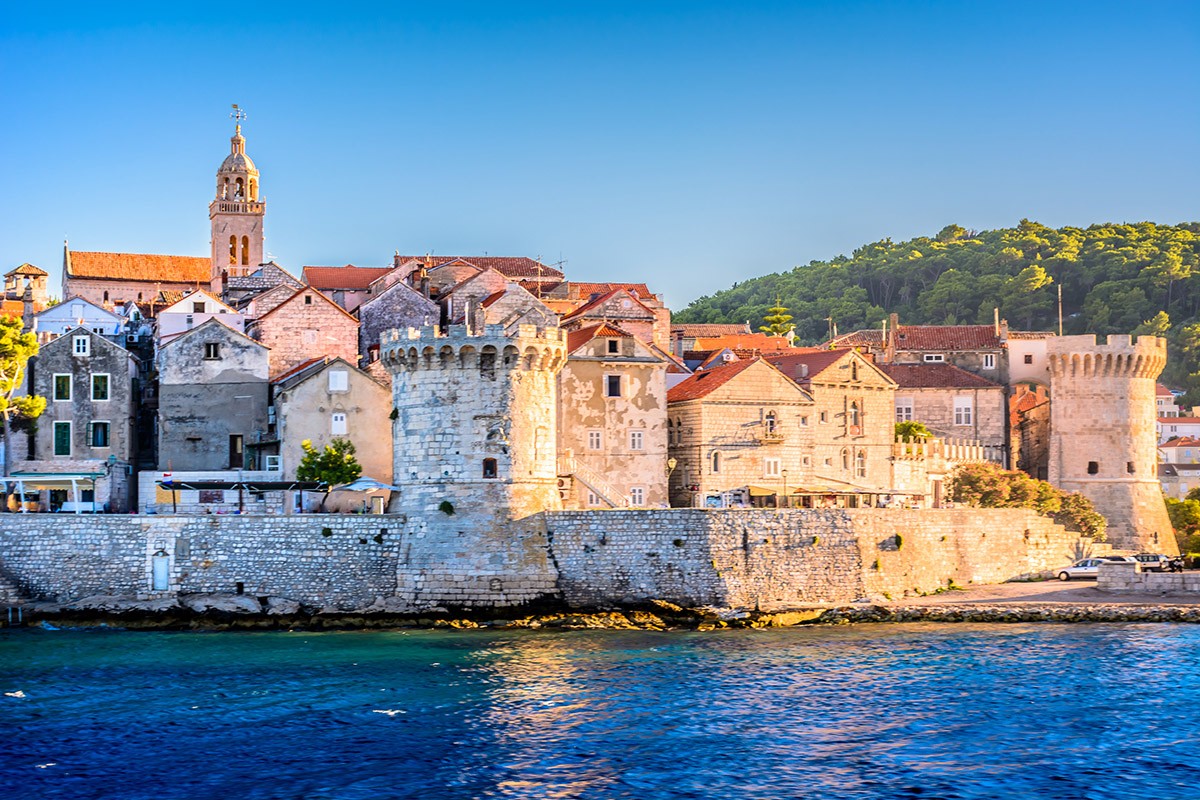 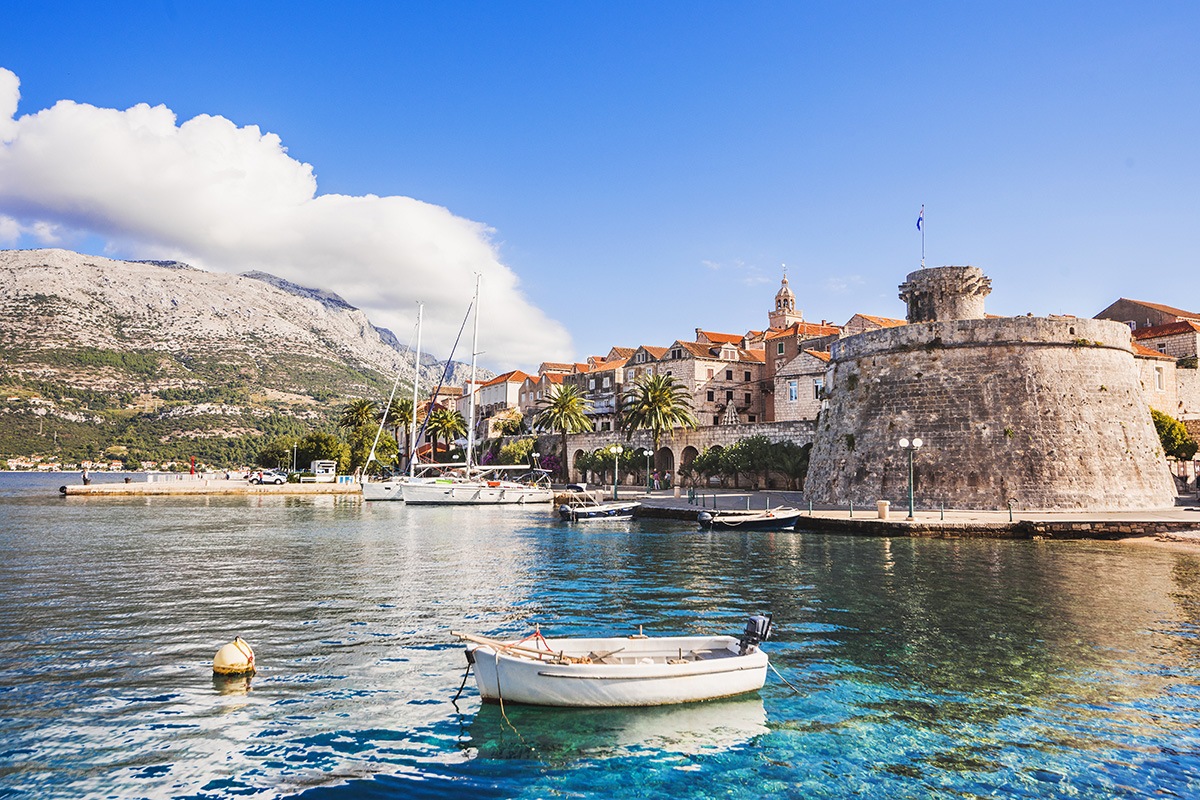 St. Mark’s Cathedral is the center of religious life and one of the most significant and beautiful monuments in the old town of Korčula. The styles observed in the cathedral change from Romanesque through Gothic, Renaissance, and in shades to Baroque. It was built by Italian masters, but mostly by local builders through the 14th, 15th, and 16th centuries. The cathedral completes the impeccable beauty of the city and the island. The stone lady, with her dignified beauty, captivates every traveler who sees the horizons of Korčula for the first time. The facade of the cathedral is stylistically diverse and at the same time monumentally unique. It testifies to the golden age of stonemasonry and architectural skills of the town and the island of Korčula. 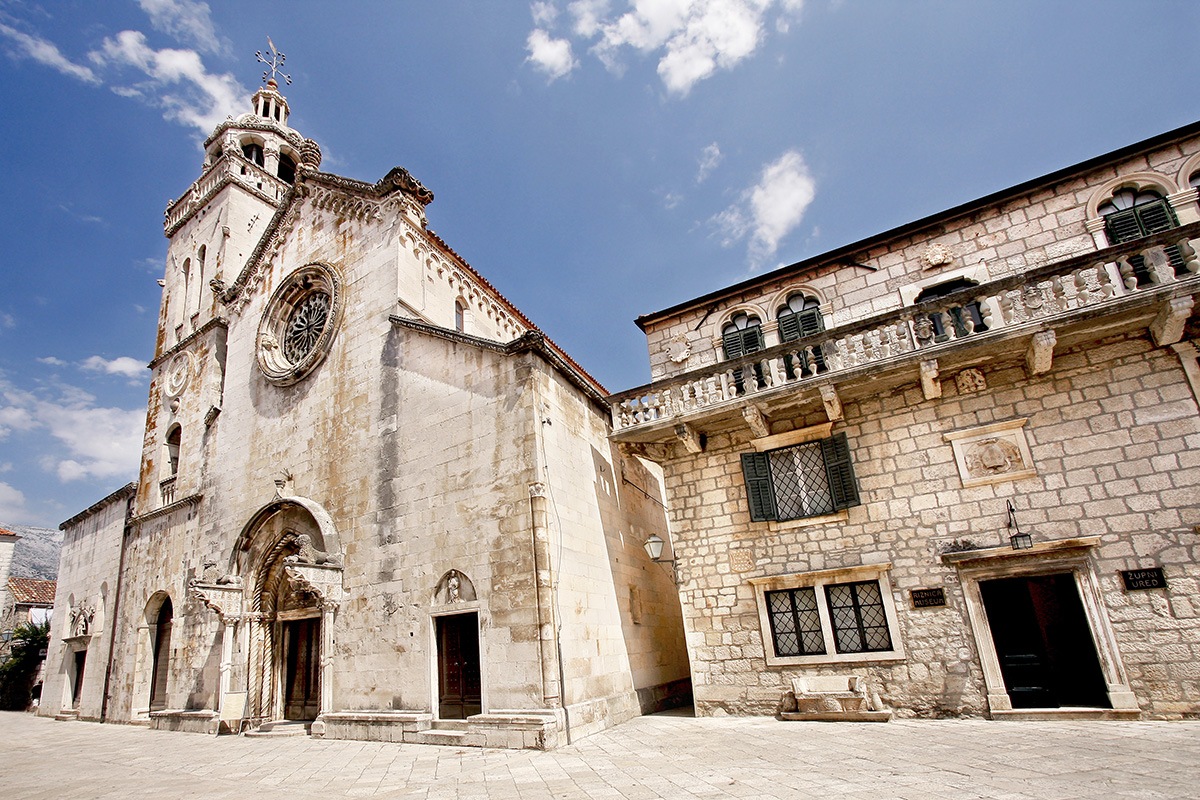 Want to visit Korčula? You can find accommodation on Visitteo. Compare prices of hotels, apartments, rooms, studios, villas, and many other types of accommodation.