Kornati islands are among the most beautiful scenes of the Adriatic. In the middle of the blue sea, there are numerous islands, islets, large and quiet bays, high cliffs, the ruggedness of the rocks, but also the colorful and rich underwater world. Nowhere in the world is there such a branched, stone labyrinth of islands as the one within the Kornati National Park. This archipelago is known as the most indented archipelago in the entire Mediterranean and is special in its way. Drywalls, unique landscapes, an impressive aerial view of the wonderful appearance created by nature, and additionally shaped by man. Kornati are a story for themselves.

The raw beauty of Kornati

Kornati National Park is the real highlight and it’s worth a visit if you decide to come to Croatia. They are located in Dalmatia, between the city of Zadar and Šibenik. They represent the densest group of islands in the Mediterranean. The islands are lined up next to each other and form an almost unreal scenery in the sapphire blue sea. Since 1980, they have been under the protection of the Kornati National Park. And accordingly, breathtaking landscapes await you on the Kornati. As well as beautiful beaches, romantic bays, amazing hiking trails, fantastic underwater world and rugged nature. The most impressive is the unique natural spectacle of countless small islands that are close to each other and form an almost unreal lunar landscape. 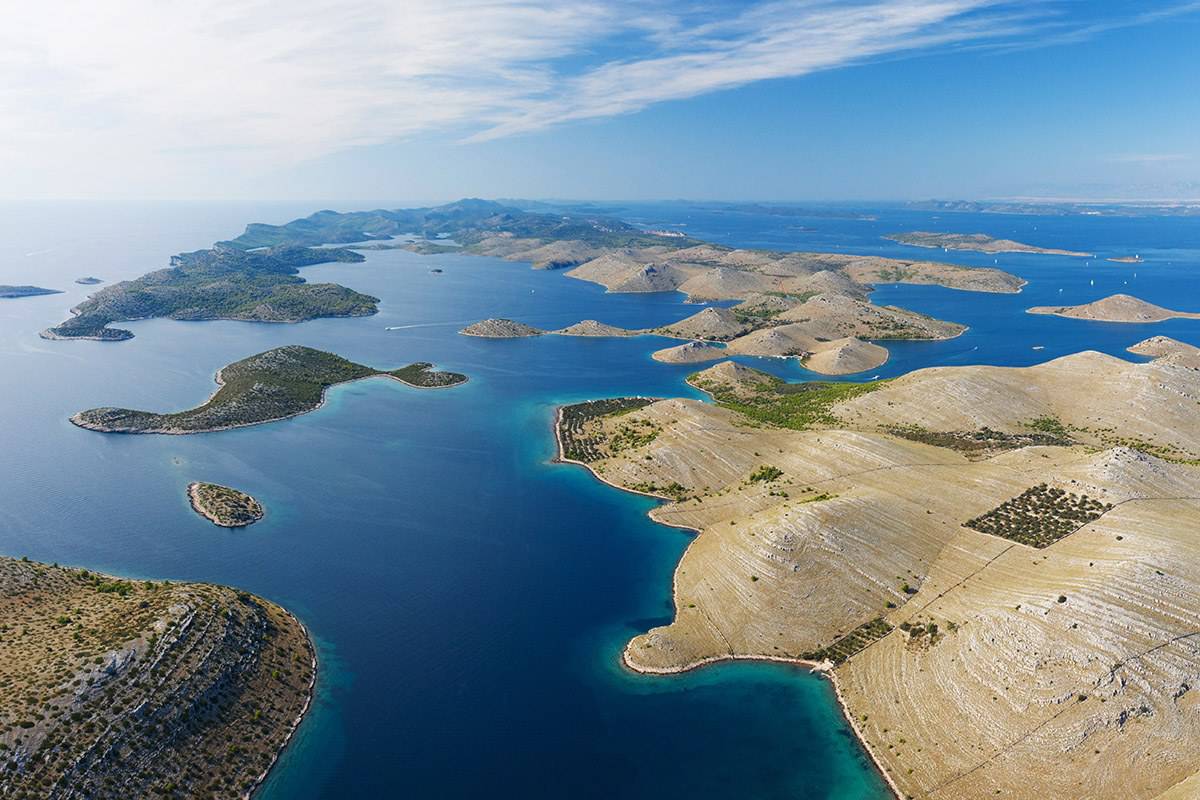 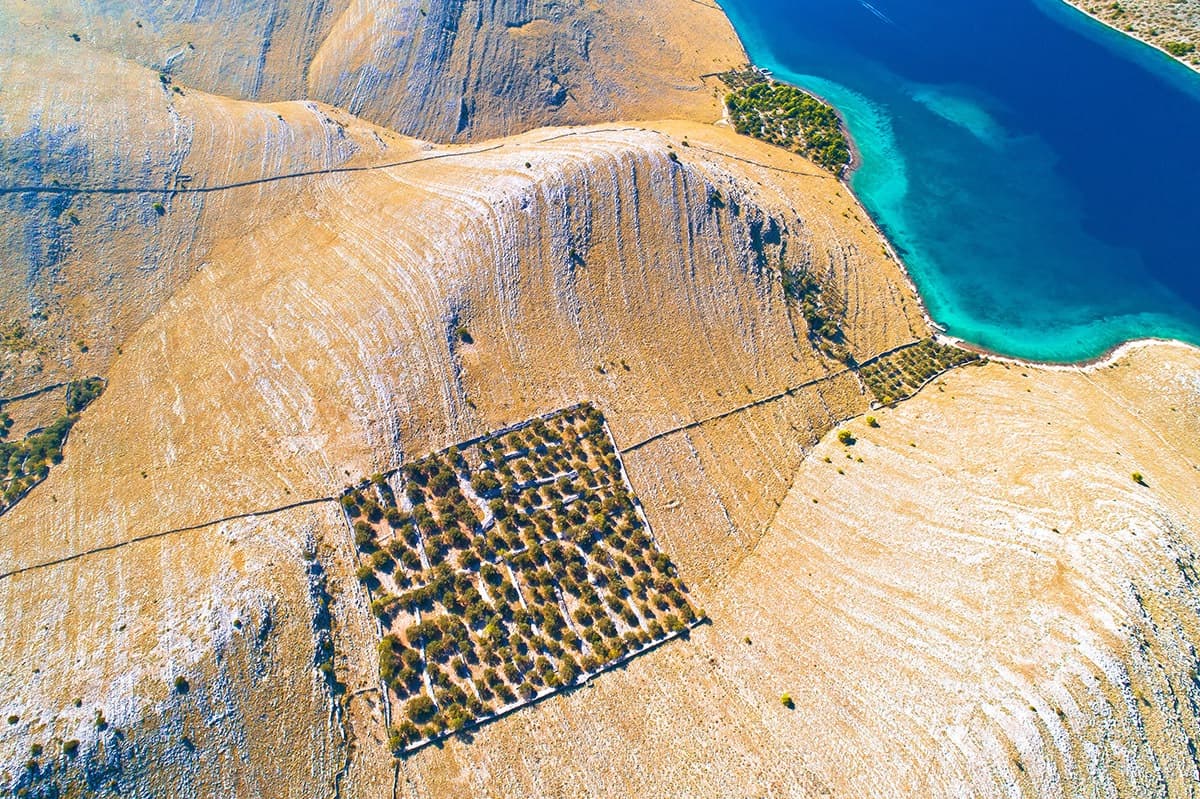 Consisting of 89 islands, islets, and reefs covering an area of ​​220 km2. The Kornati are the largest and densest archipelago in the Adriatic. Due to the typical karst terrain, the islands are permeated with cracks, caves, and rocky cliffs. The holm oaks that were found here are long gone. Far from the islands being deprived of their beauty. Deforestation highlighted stunning rock formations, whose complete whiteness on the dark blue Adriatic is a beautiful sight. Some islands are creepy beautiful, desolate places, with karst terrain. While others are home to vineyards, olive groves, and orchards. The appearance of the Kornati was influenced by many factors. And throughout history, to this day the Kornati are still shaped. They are shaped by the strong wind, the sun, and the sparse vegetation. The human hand has certainly had an additional influence throughout history. 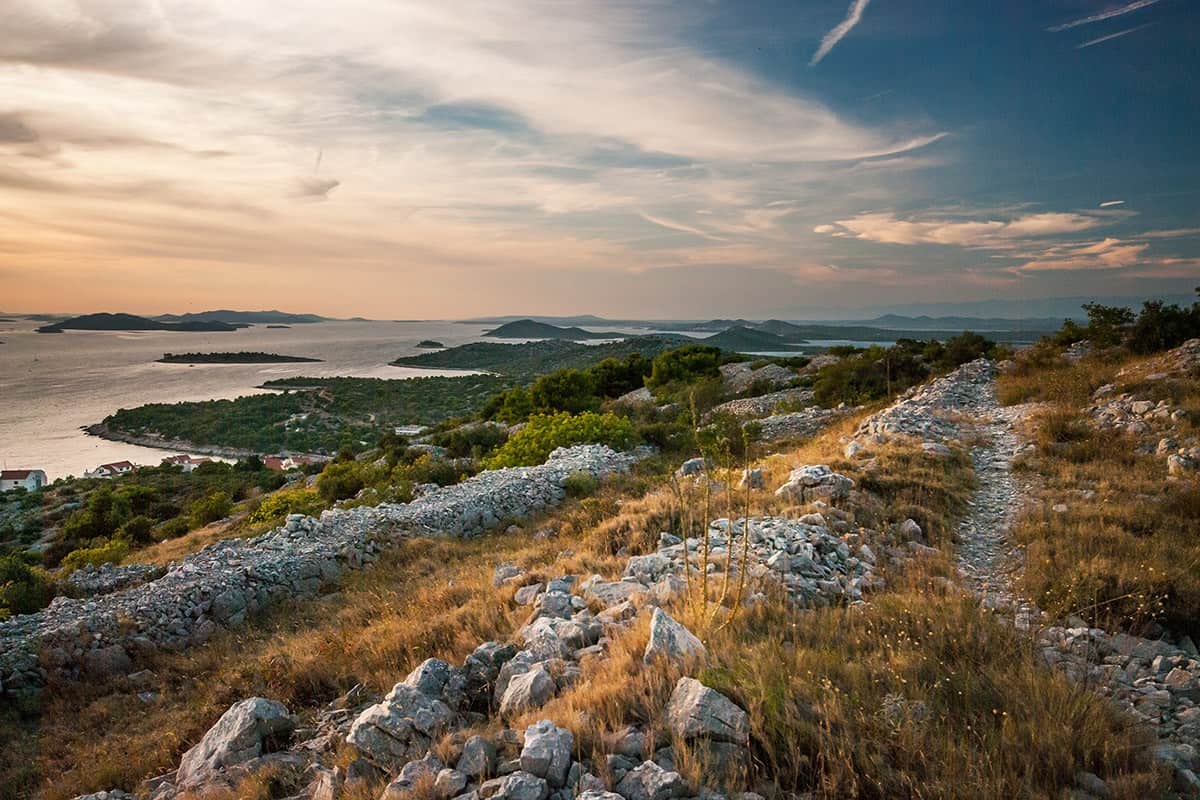 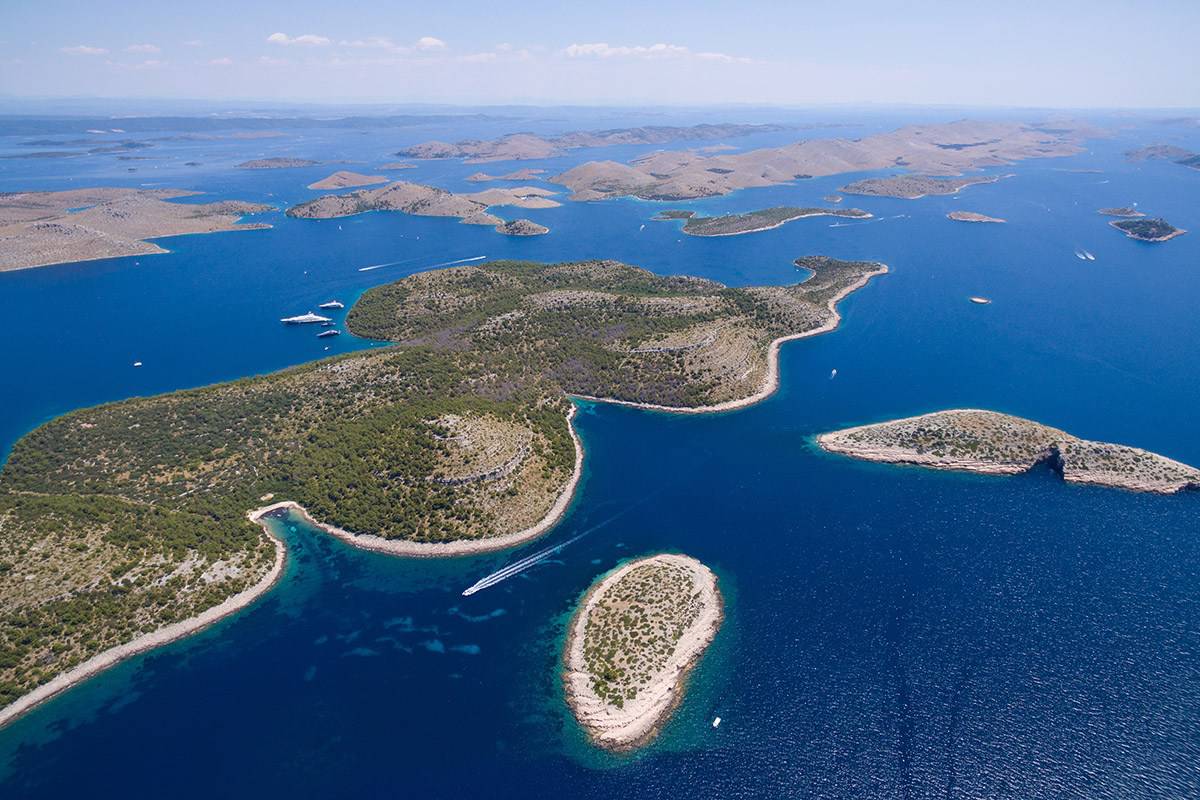 What to see in Kornati National Park?

The most important monuments of human labor on the Kornati islands are drywalls. The Kornati islands were rebuilt with hundreds of meters of drywalls. Which were built to preserve the property and protect the pasture. And prevent sheep from moving from one property to another. On the island of Kornat, the length of these walls is 70 km.

The colonization of the Kornati began with the arrival of Illyrian-era inhabitants who began building small dwellings on the island. Small square dwellings were built, and their number speaks of the good population of the island at that time. Apart from sheep breeding, the population was also engaged in fishing, so the forts served both as a place to live and as a storehouse.

On the island of Kornat there is an impressive Byzantine building – the fortress of Turet, which dates back to the 6th century. The fort was built for military purposes. Turet is the only fortress from that time on the Adriatic that was not destroyed. Obviously, because it was located in a place without settlements, so the population did not reach for its stone.

The Tajer lighthouse is located on the island of Sestrica Vela on the edge of the Kornati National Park and the Telašćica Nature Park. Tajer is special in many ways. It stands out from other Croatian lighthouses for its specific appearance and method of construction, very reminiscent of lighthouses in the north of Scotland. The beautiful stone building connected to the monumental iron tower forms a distinctive style of the lighthouse, which has no competition on the Adriatic.

Strunac is a beautiful bay located in the heart of the Kornati archipelago, on the uninhabited island of Žut. Excellent food, warm sea, magical views, and dear people are waiting for you right here. That is why Strunac is the perfect place to escape from everyday, hectic life. It is one of the rarer examples of pure, untouched nature.

One of the most striking natural phenomena on the Kornati are the cliffs on several islands in the Lower Kornati Islands, which face the open sea. The highest Kornati cliffs are on the island of Klobučar, Mani and Rašip. The submarine extensions of these cliffs reach up to 100 meters in depth. Kornati cliffs are one of the reasons for the peculiarity and uniqueness of the archipelago. 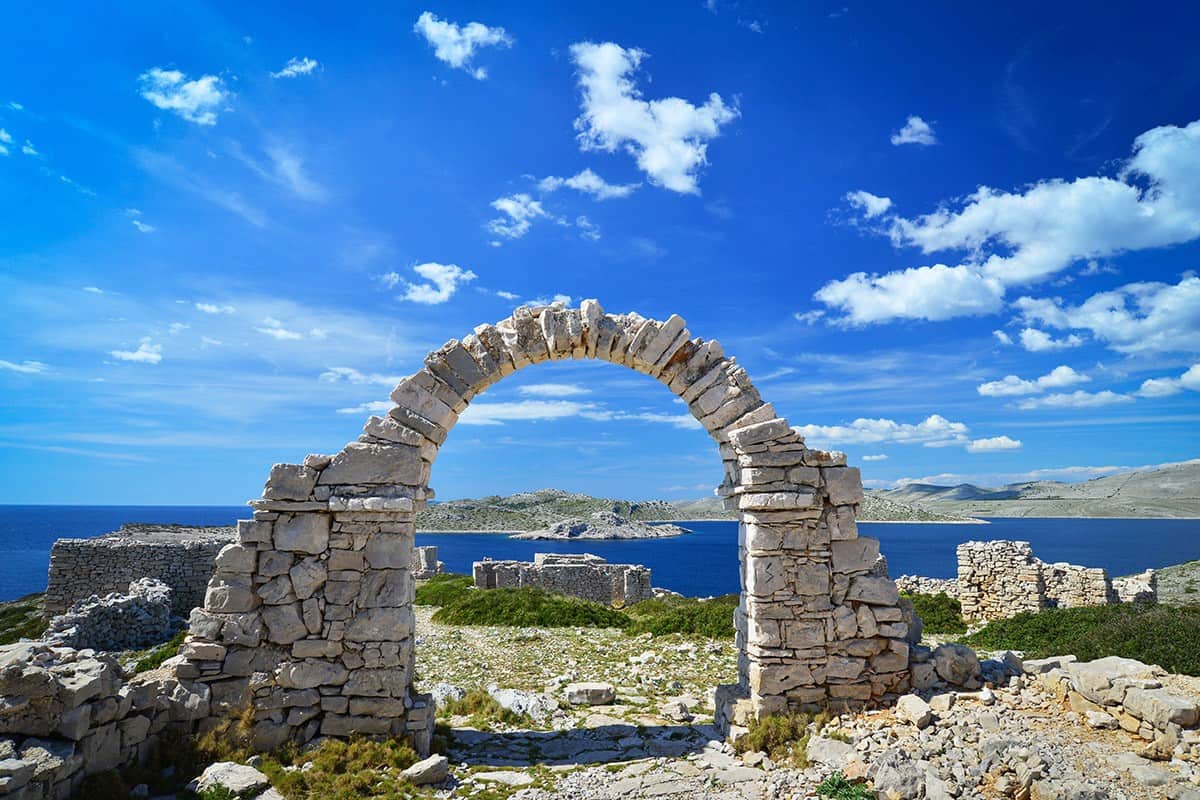 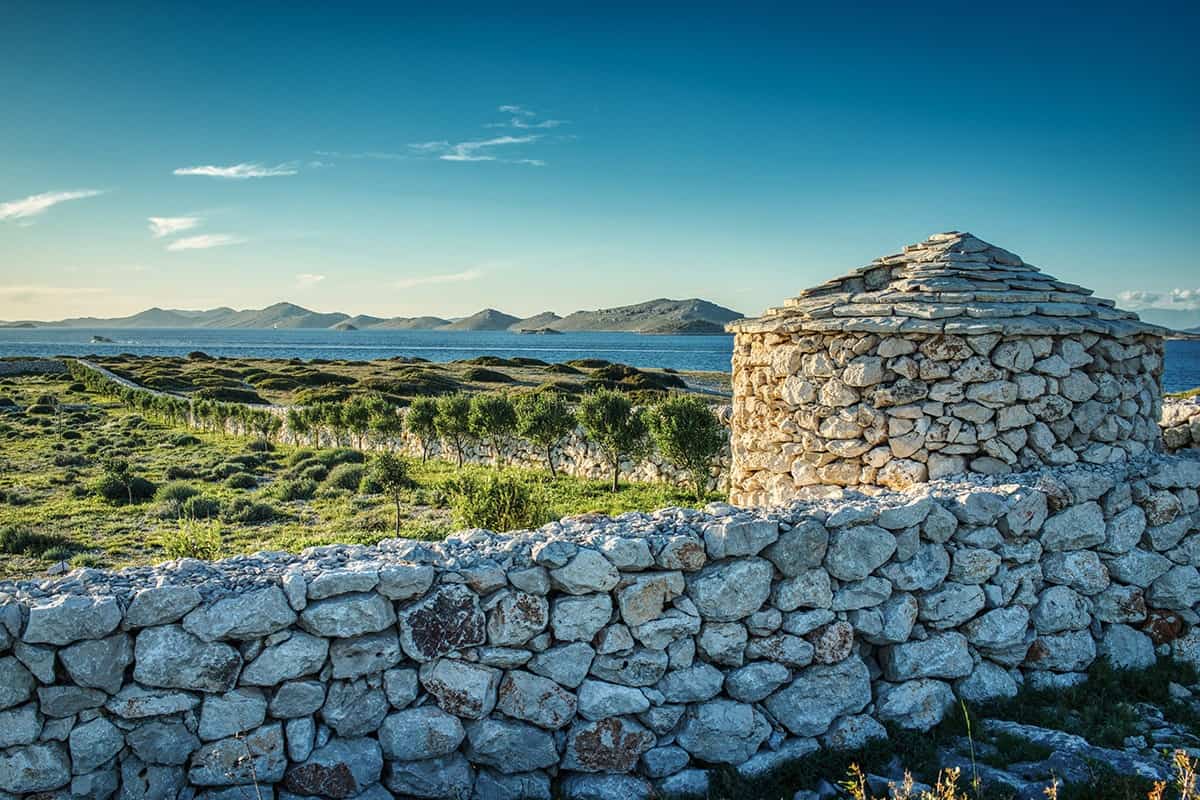 Want to visit the Kornati islands? You can find accommodation on Visitteo. Compare prices of hotels, apartments, rooms, studios, villas, and many other types of accommodation.