The city of Zadar is a city of exceptional history and rich cultural heritage. Home to a historic old town of Roman ruins, medieval churches, cosmopolitan cafes, and quality museums set on a small peninsula. Zadar is an intriguing city, a city surrounded by historical ramparts. A treasury of the archaeological and monumental riches of ancient and medieval times. Renaissance and many contemporary architectural achievements such as the first Sea Organ in the world.

Zadar is a city full of memory

Old Town Zadar is ancient and lovely, a place where you can wander among Roman ruins. Zadar is one of the oldest continuously inhabited cities in Europe, and this area has been populated since prehistoric times. Today, it is a popular tourist destination, packed with history, culture, and tons of things to see and do. While it’s not a picture-postcard kind of place from every angle. It’s a mix of ancient Antique, Ramanique, Renaissance, Habsburg elegance, and modern architecture. It’s no Dubrovnik, but it’s not a museum town either – this is a living, vibrant city, enjoyed by residents and visitors alike. 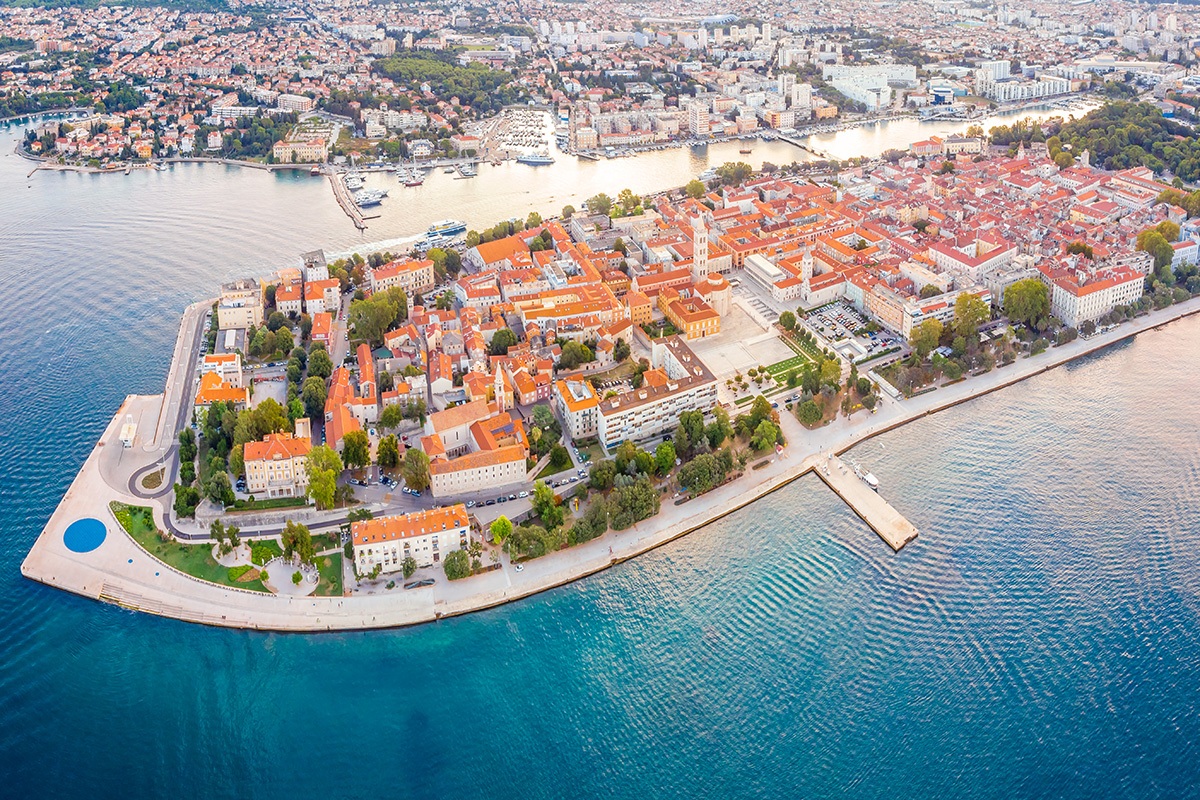 Situated in the heart of the Adriatic. Zadar is the urban center of northern Dalmatia as the administrative, economic, cultural, and political center of the region with 75,000 inhabitants. The coast is particularly indented, the islands and the untouched nature allures many boaters to these regions. The archipelago counts 24 bigger and about 300 smaller islets and rocks and 3 nature parks. Alfred Hitchcock once claimed that the sunsets in Zadar are the most beautiful in the world. If you spend one day in Zadar and make sure to venture out in the evening, you can see for yourself. 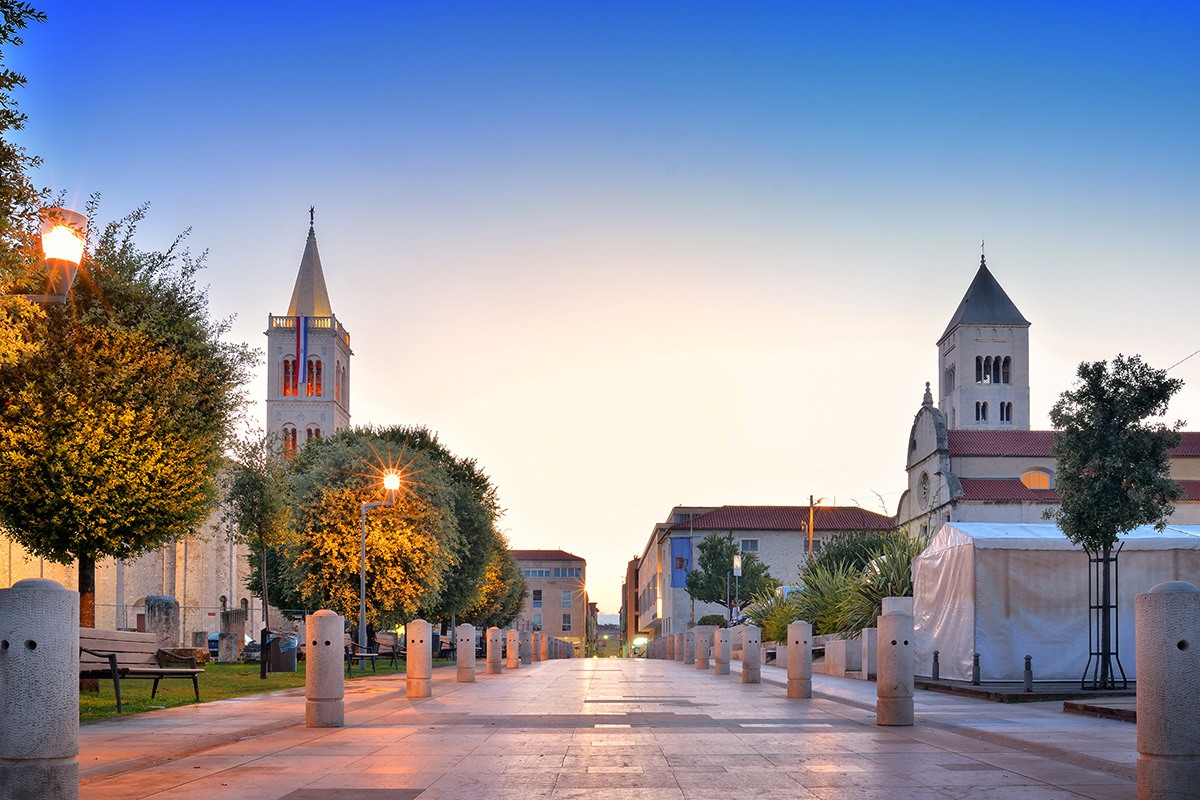 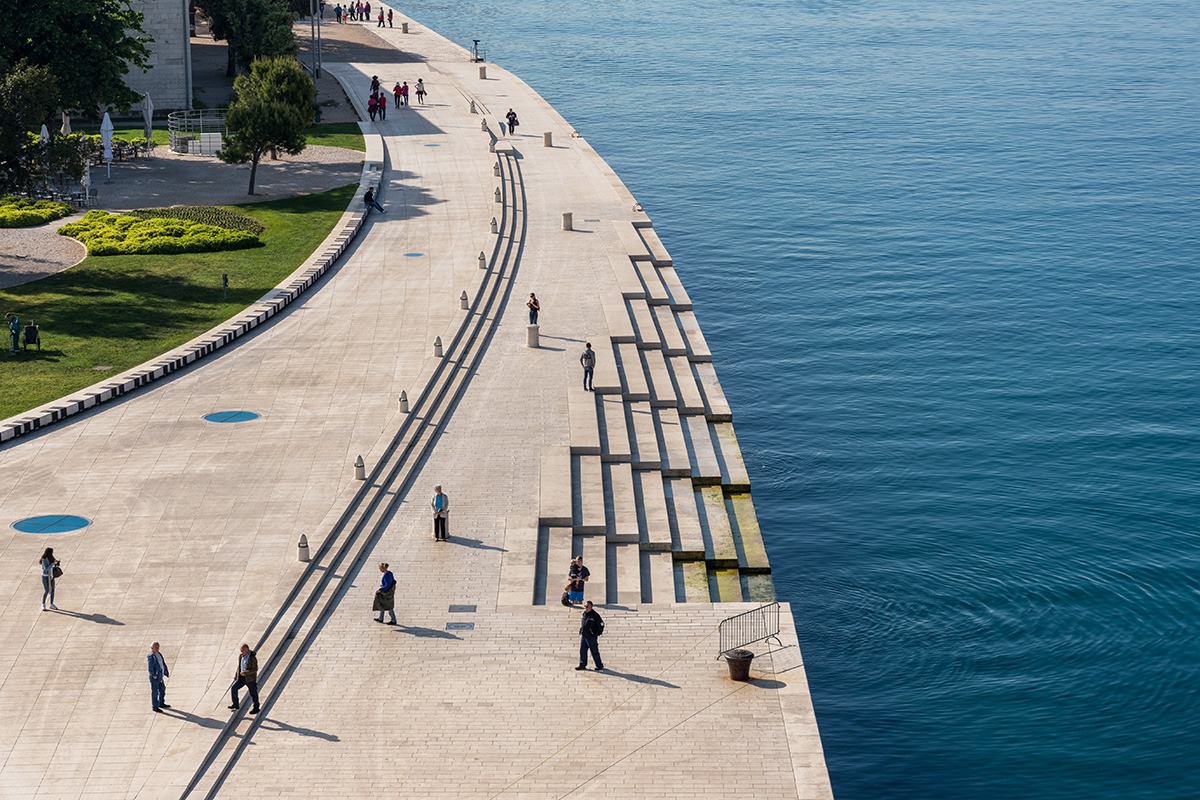 The most popular sights in Zadar 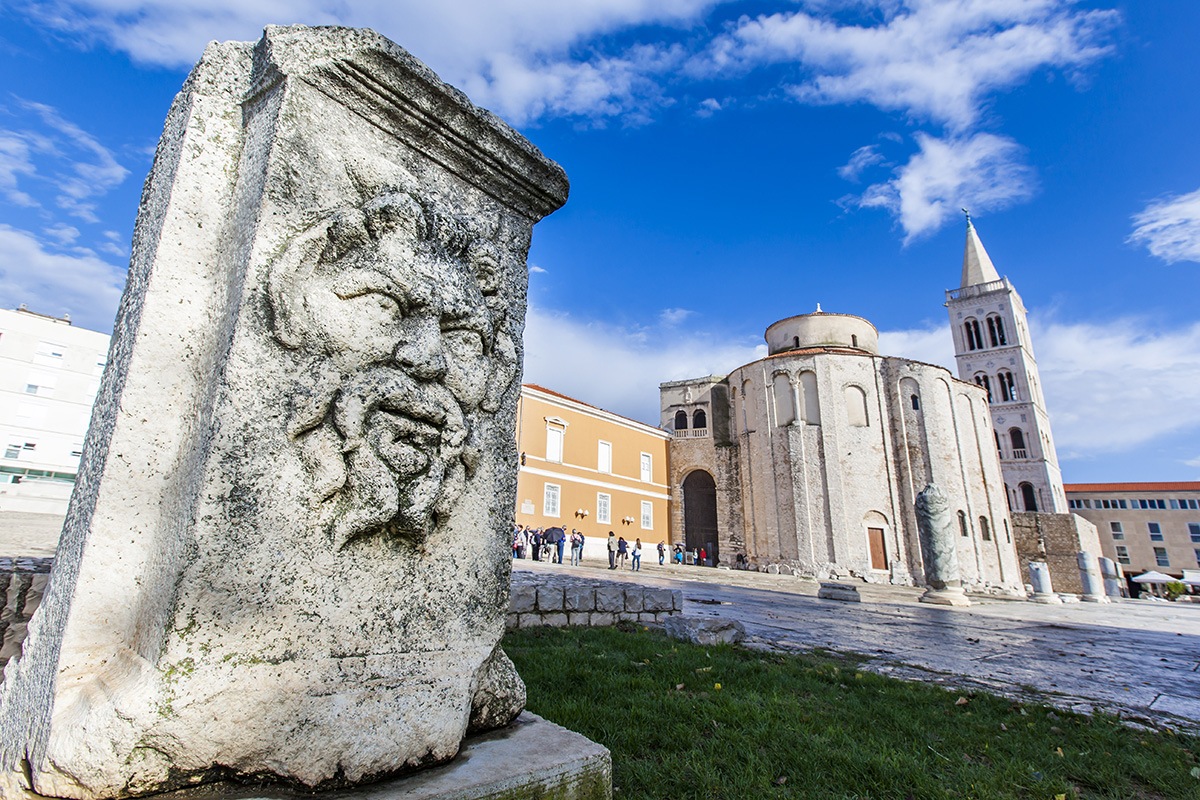 Built on remnants of the Roman Forum in the 9th century, the church was originally dedicated to the Holy Trinity and only later acquired the name of the bishop who oversaw its construction, Bishop Donatus. The Church of St. Donat is the most valuable monument of pre-Romanesque architecture of the early Middle Ages (9th century) in Croatia and the symbol of the city of Zadar. Because of its particular shape, it is one of the most important churches of its kind in Europe. 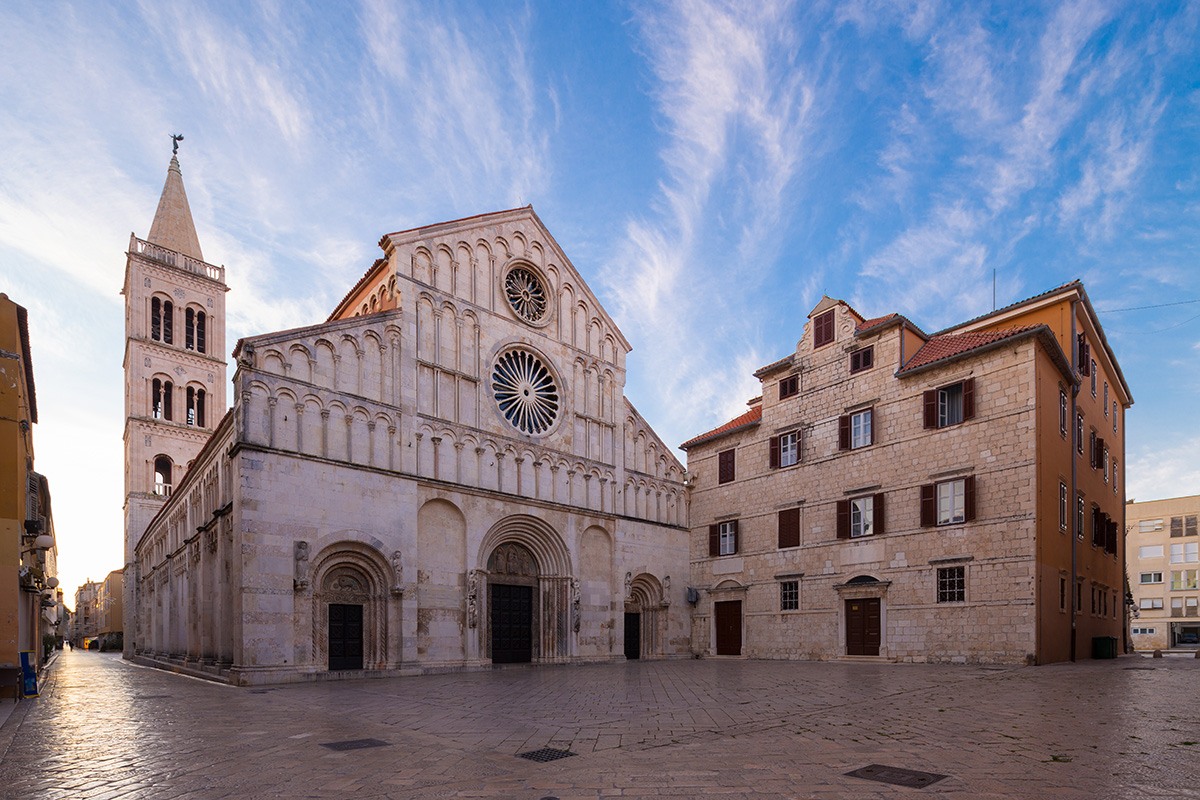 The cathedral of Saint Anastasia in Zadar is a three-nave Romanesque building. Today’s appearance of the Romanesque cathedral was shaped in the 12th century. Its bell tower was built in the 15th and 19th centuries, mostly in the Neo-Romanesque style. The cathedral of Saint Anastasia summarizes the history of the entire Zadar archdiocese and its city. Zadar is unthinkable without a cathedral, urban and spiritual. Cathedral is one of the unavoidable components of its appearance and decoration. 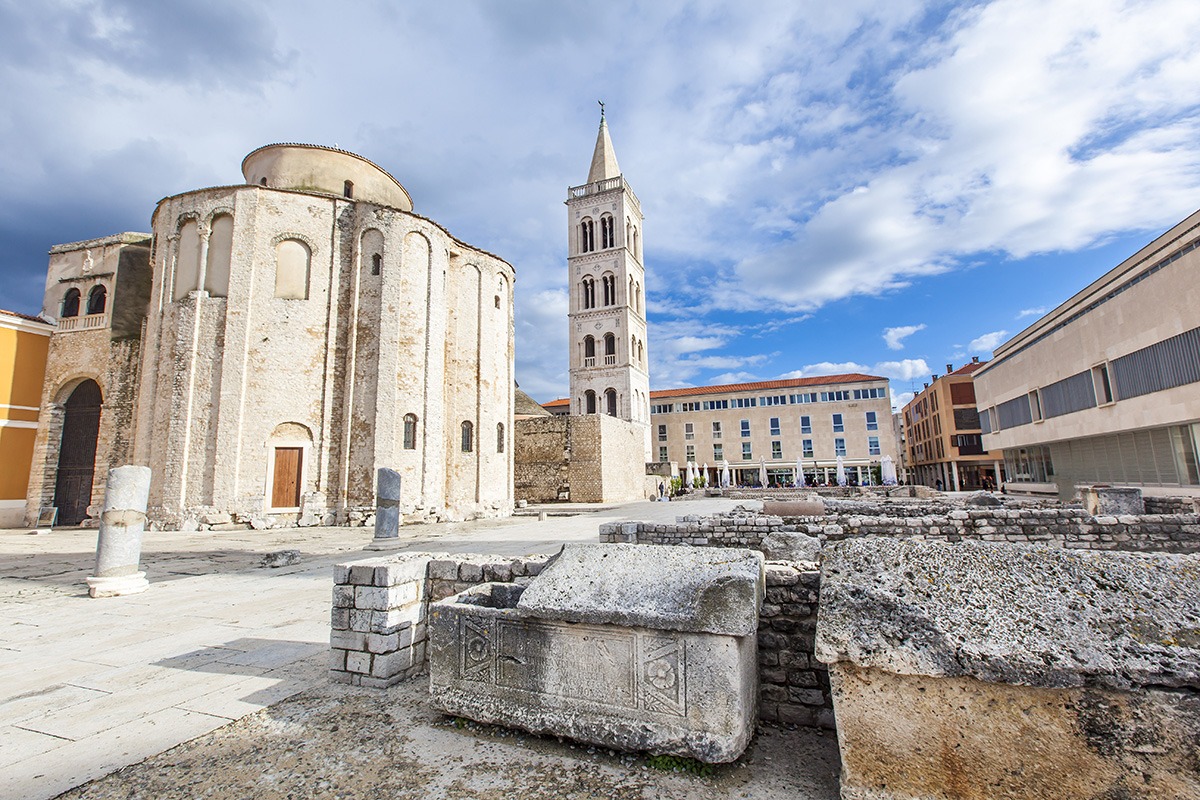 The Roman Forum in Zadar is the largest on this side of the Adriatic. It was built by Emperor Augustus, as documented on two 3rd Century stone inscriptions on the site. The Forum in Zadar is located in the heart of Old Town Zadar. Where passersby can walk among the remains of the Romans. At the time of its full glory, the Forum was surrounded on three sides by a magnificent portico. Today, it is an inevitable square for strolling and one of the symbols of the city.

4. Greeting to the Sun 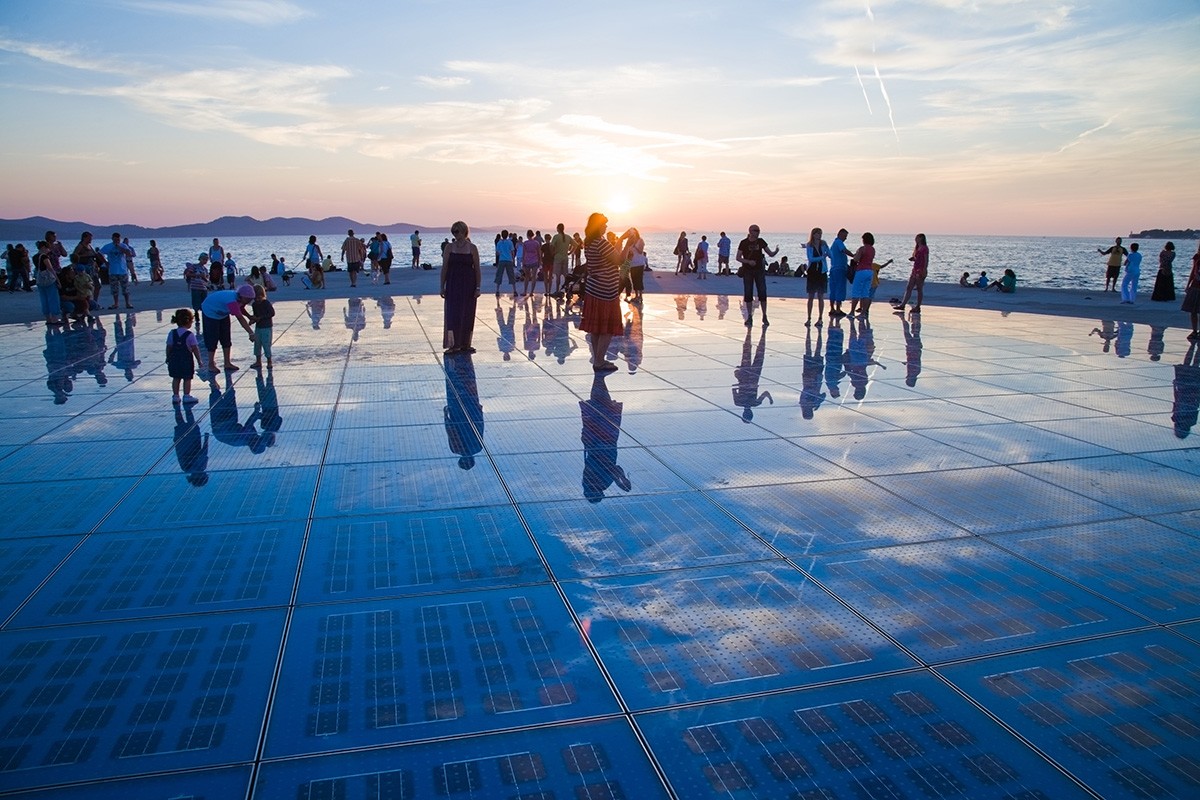 Zadar’s Greeting to the Sun is a place packed with tourists, excited children, and locals every night, especially at sunset. When the gorgeous sea views and the illuminated pavement make for a spectacular sight. This solar-powered, circular work of art comes alive after the sun sets, lighting up in an array of colors and patterns. Kids will love dancing across the glass surface, chasing the lights, and it makes for a wonderful photo with the sunset in the background. 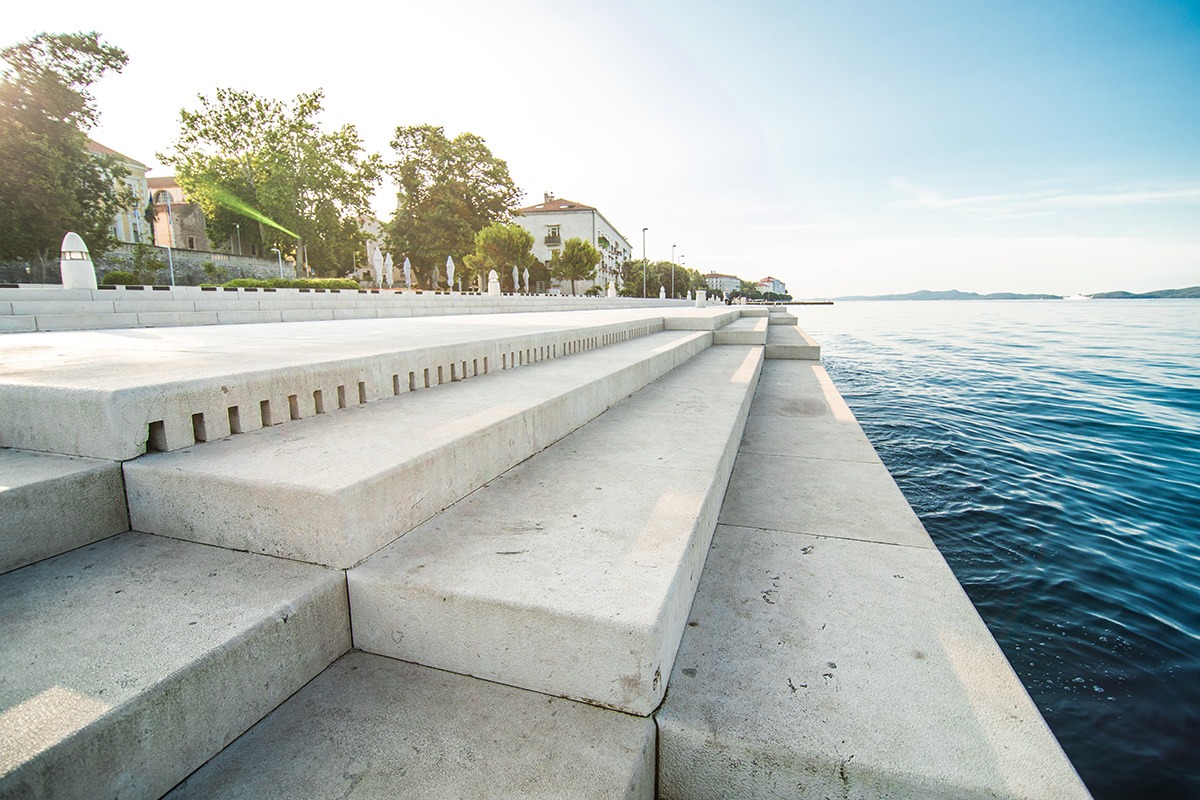 At the same time, the revamped Greeting to the Sun will connect up to Zadar’s other bonkers attraction, its Sea Organ. This is an adjacent art installation, formed by cleverly cutting steps into a section of the concrete waterfront promenade. These have underwater pipes in them that sound musical notes when filled with water. And create a harmonica effect that sounds as if each wave is gently sighing. Created by Croatian architect and artist Nikola Bašić, the Sea Organ favorite thing among visitors to see in Zadar.

Want to visit Zadar? You can find accommodation on Visitteo. Compare prices of hotels, apartments, rooms, studios, villas, and many other types of accommodation.