The hidden and uncrowded places in Croatia will enchant even an experienced traveler. There is an unwritten rule that charm always comes to the fore more intensely when you visit one of the interesting destinations in its authentic light. To enjoy being free, playful, and like a real explorer getting to know all the hidden stories of the place you are at. Without large groups of tourists, you can enjoy every detail, and therein lies the real magic.

When they are less crowded, you can get to know the destination colored by energy and fee it in a completely different way. Dubrovnik or Plitvice Lakes has a lot of charm. But they are overcrowded with people from all over the world. These places can become frustrating even though they are beautiful, fascinating, and full of attractions. As in every country, so in Croatia. There are various places that are not so explored, but they are rich in beauty. Want to see a destination without the crowds in Croatia? Consider visiting one of these stunning destinations. Tourists have not yet flooded them, so you can dwell on every detail as long as you want. We present to you twelve destinations in Croatia that are less known, but that is exactly why they are magical. 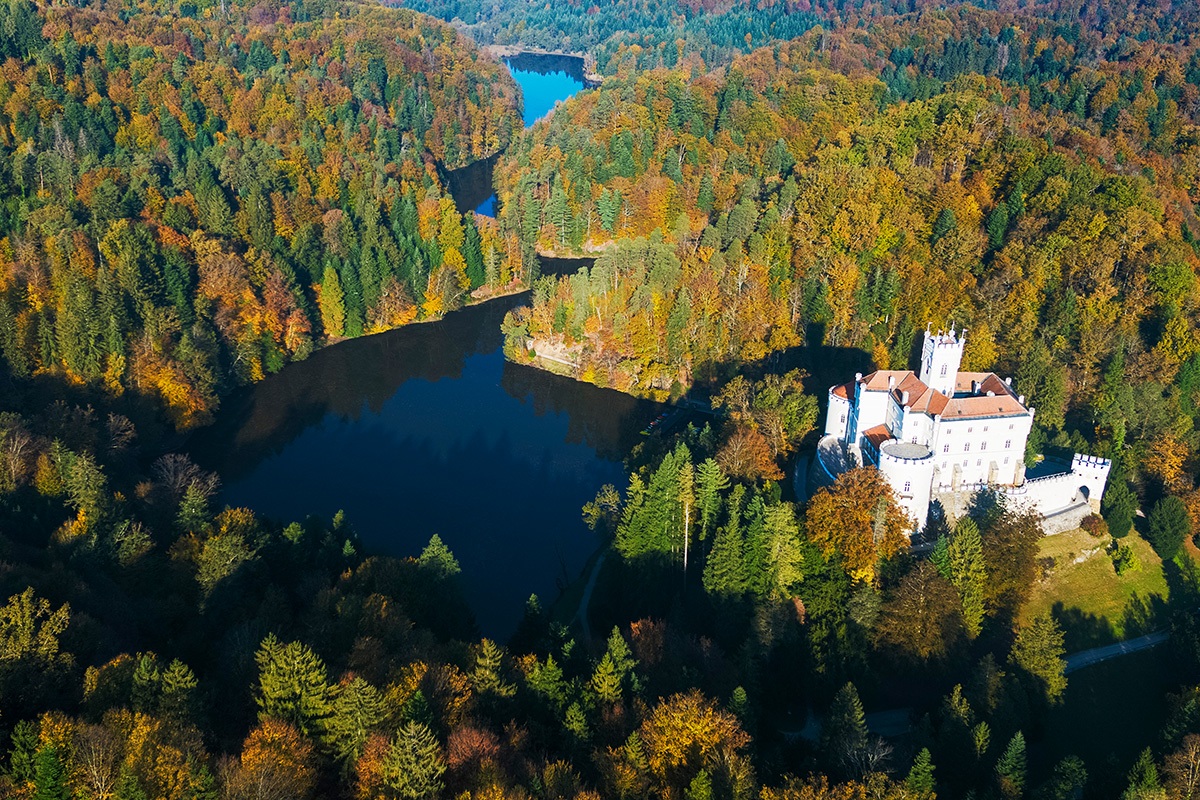 Idyllic, magical, almost unreal. We could briefly describe one of the most charming places which you can see. On the edge of Croatia is a castle with a park and a lake that hides a history of almost 800 years. Trakošćan Castle is one of the most attractive castles in Croatia. Dating from the 13th century, which makes it one of the oldest castles in this area. Trakošćan is rightly called the pride of Hrvatsko Zagorje. Because of its ancient and glorious past, but also because of its beauty, preserved objects, and the spirit of the time. In the castle, there is a museum with a valuable collection of paintings, furniture, weapons, valuable objects from the Renaissance to Historicism. The permanent exhibition of the castle is in its original function. And presents the life of the Croatian nobility through the history of Trakošćan and the Drašković family. 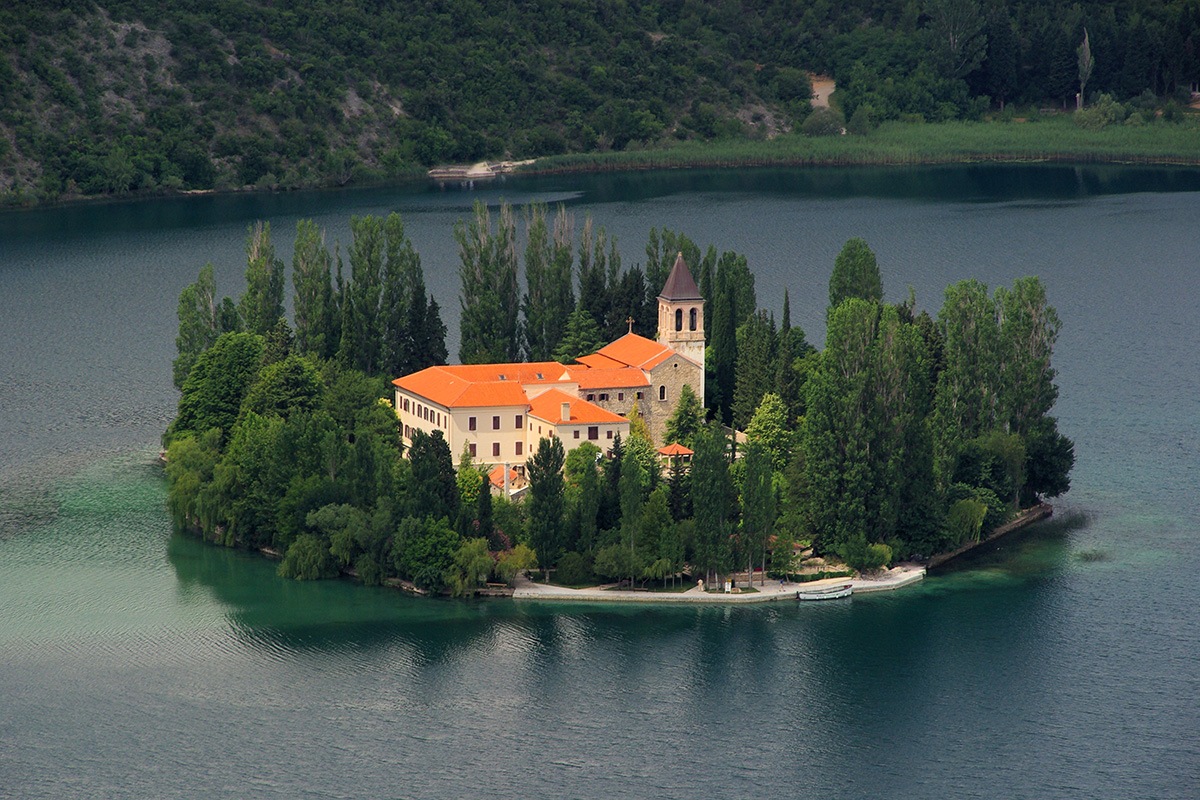 Visovac is an island located on the Visovac Lake in the Krka National Park. Since 1445, there is a Franciscan monastery. Which with its beautiful landscape forms a unique ambiental, natural, cultural, historical, and spiritual entirety. The monastery museum is very interesting and includes numerous exhibits. The museum keeps a significant archaeological collection, a collection of historical sacral vestments and utensils. Some objects date back to Roman times, more precisely from the 1st century. And the monastery library is especially rich. This uniqueness, history, and beauty make Visovac one of the most important natural and cultural values ​​of Croatia. During its turbulent history, Visovac was, but also remained, an island of peace and prayer. And its Franciscan monastery is an indestructible fortress of spirituality and faith. 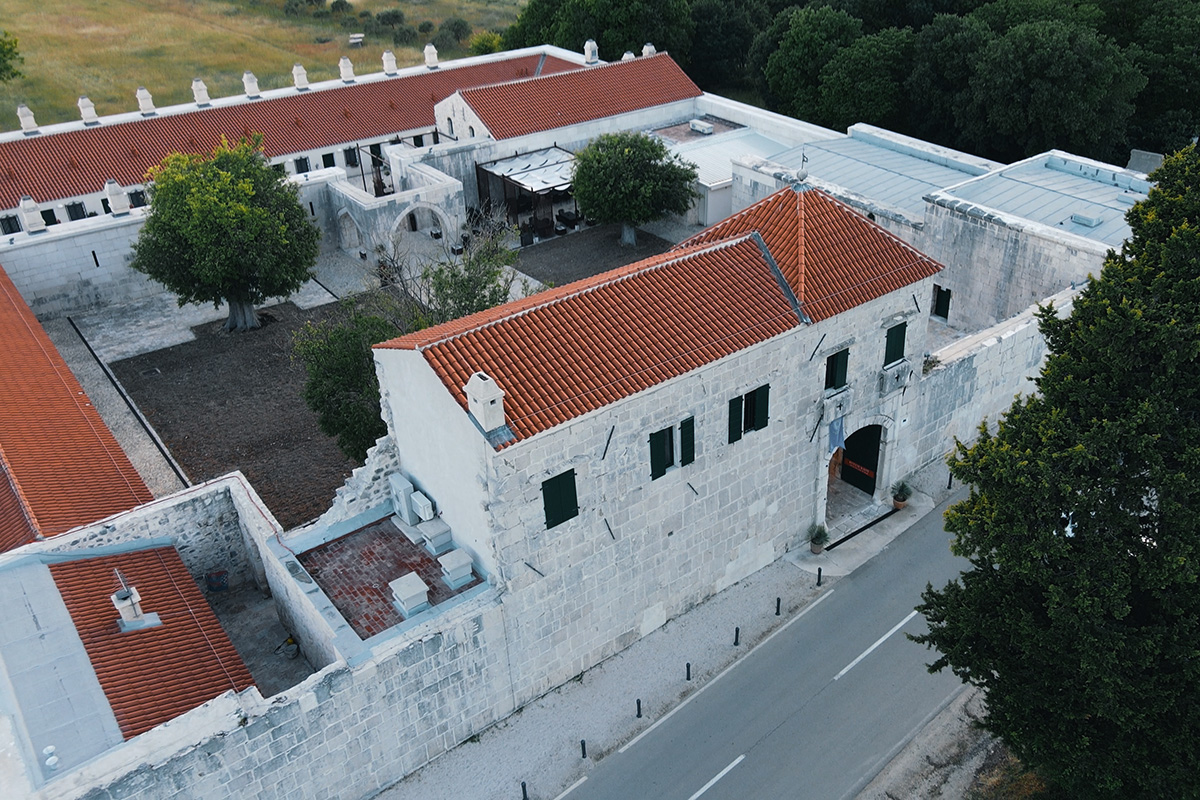 Maškovića Han is the largest monument of Turkish architecture in Croatia and the westernmost building of Islamic architecture on the territory of the former Turkish Empire. The construction of Han began in 1644 by order and funds of Jusuf Mašković. Originally from Vrana, a high dignitary at the sultan’s court and the supreme admiral of the Turkish fleet. Its tragic fate leaves Han unfinished. Jusuf Maškovića planned to build a magnificent monumental and modern building that would have all the necessary comfort, including a Turkish bath – a hammam. The local government renovated the Han and converted it into a small heritage hotel. Through which visitors can get to know part of the turbulent history of Vrana. Besides the hotel, there is a restaurant, a wine shop, a souvenir shop, and a small museum. Maškovića Han is in the vicinity of the Vrana Lake, the largest lake in Croatia. 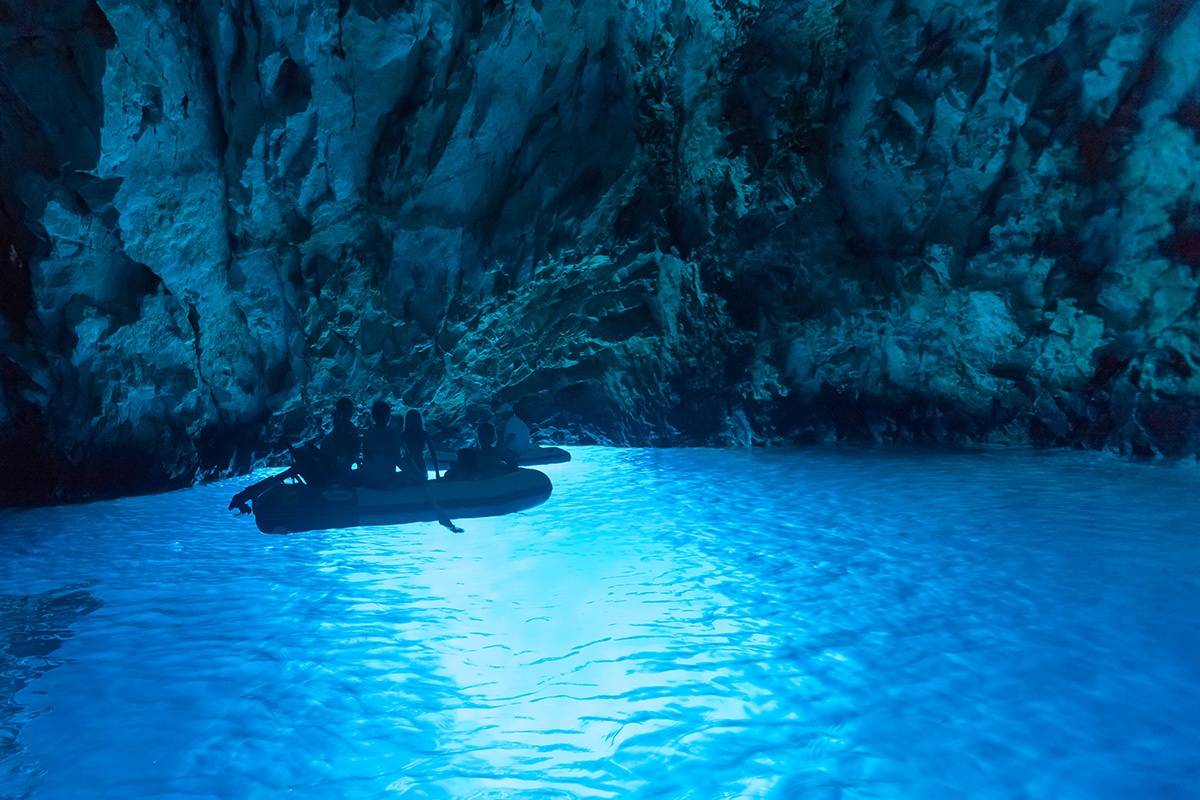 The small island of Biševo, less than five nautical miles from Komiža, hides the famous Blue Cave. Which is one of the most famous natural monuments of the Adriatic. The beauty of the cave painted in silver azure attracts more and more tourists. It is 10-12 meters wide and 24 meters long. Baron Eugen von Ransonet discovered the cave in 1884, and it’s open to the public since then. You can enter a cave by a small boat through a narrow passage. Sunlight penetrates through the underwater opening to the sand and white rocks at the bottom. The sunlight reflects and gives a beautiful bluish-silvery glow. The light illuminates the cave in blue, and the objects in the sea in silver. A visit to the Blue Cave on the island of Biševo and the wonderful play of the sun’s rays will surely enchant you. 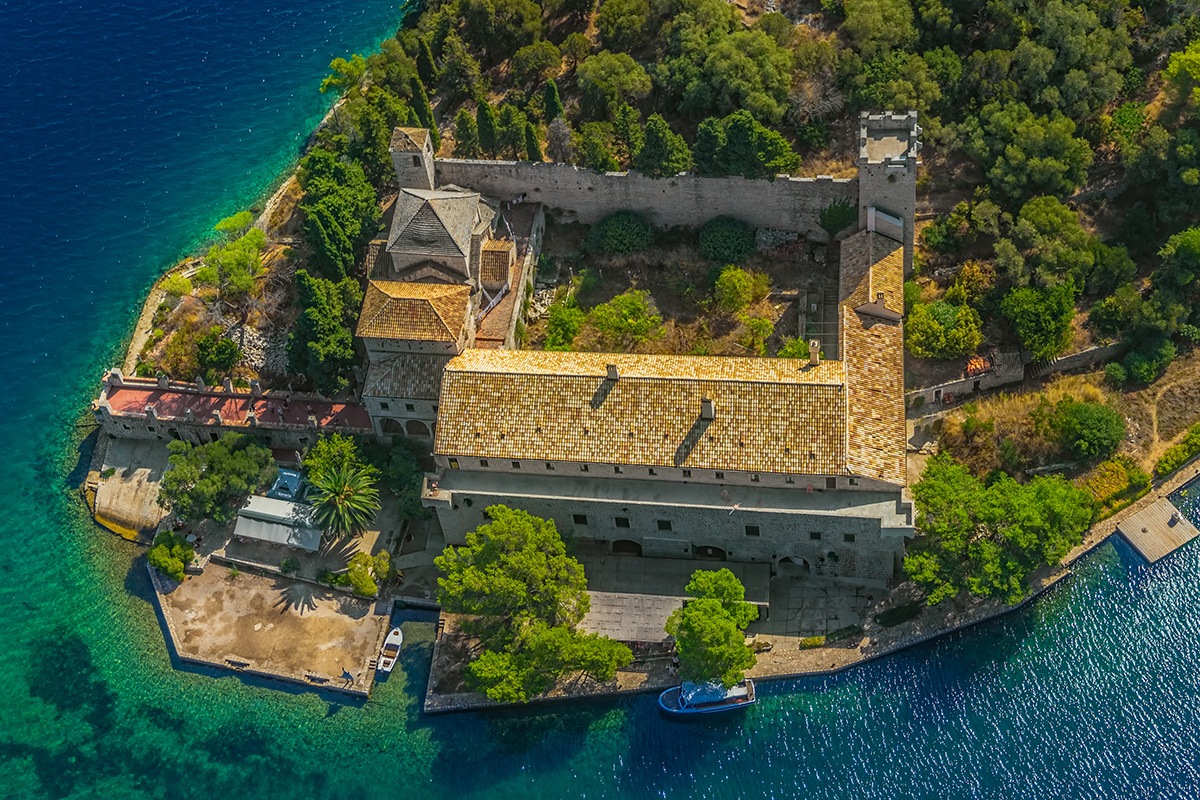 The island of St. Mary in the southern part of the Great Lake in the Mljet National Park is an exceptional natural phenomenon. But also a cultural and historical artifact. The island is a symbol of the entire national park because of its incredible aesthetics and strong cultural and spiritual dimension. The Benedictines, who inhabited the island in the 12th century. Left a legacy of the monastery complex, which testifies to the thoughtful harmony of architecture with nature. Many chronicles, treatises, and literary works have been written in the monastery over the centuries. The Benedictines first built a monastery on the island and then the church of St. Mary. The church has changed its appearance over the centuries under different styles. Renaissance and Baroque, but the central part is Romanesque. A defensive tower was built on the southeast corner. So all the buildings, including the church, form a defensive unit. 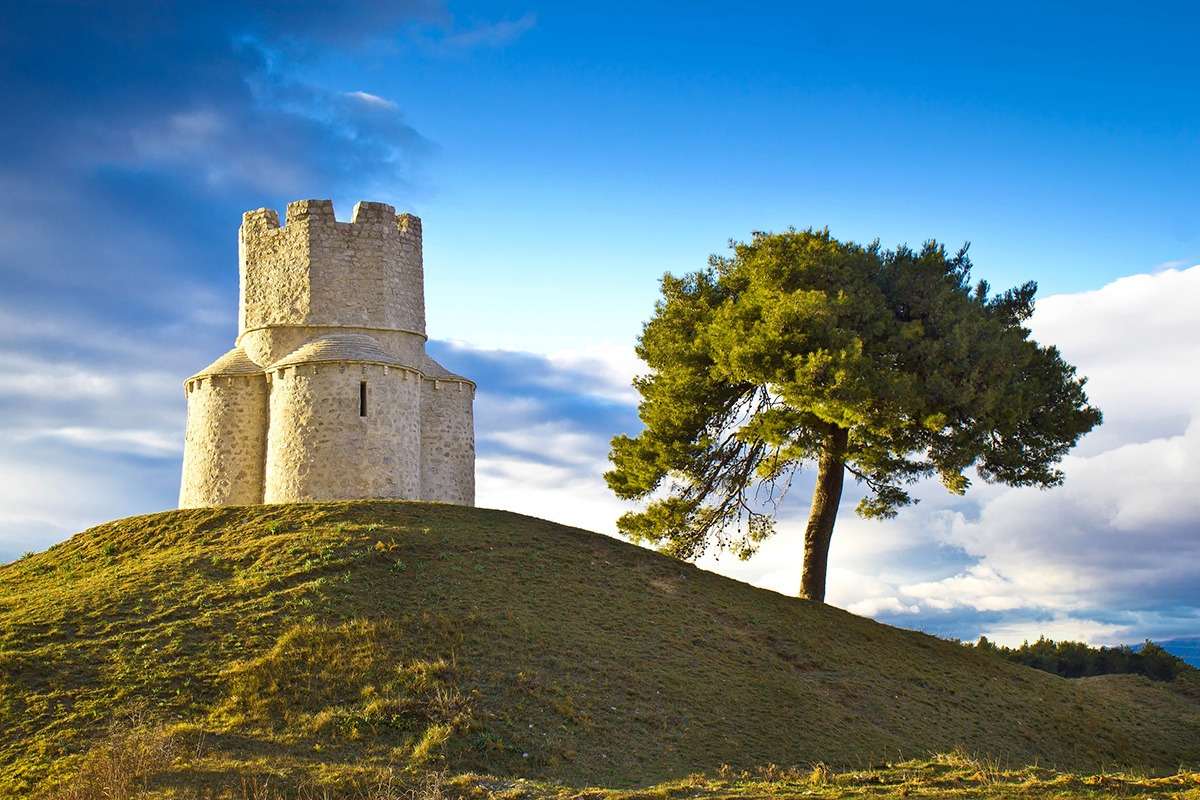 A recognizable symbol of Nin is the church of St. Nicholas which is located in the Prahulje field. According to folklore, seven Croatian kings were crowned in Nin. Who presented themselves to the people in front of the church with the same symbolic ritual – the king would point with a sword to all four corners of the world. The church is also iconic because of its location, it is placed on an earthen mound that rises above a spacious field. And in this place, you can experience unforgettable sunsets. Due to the danger from the Turks, people added a defensive crown in the 16th – 17th century, which served as a watchtower. The Church of St. Nicholas is the only preserved example of early Romanesque architecture of this form in Dalmatia. And dates from the end of the 11th and the beginning of the 12th century.

7. Shelter for warships and submarines, Vis 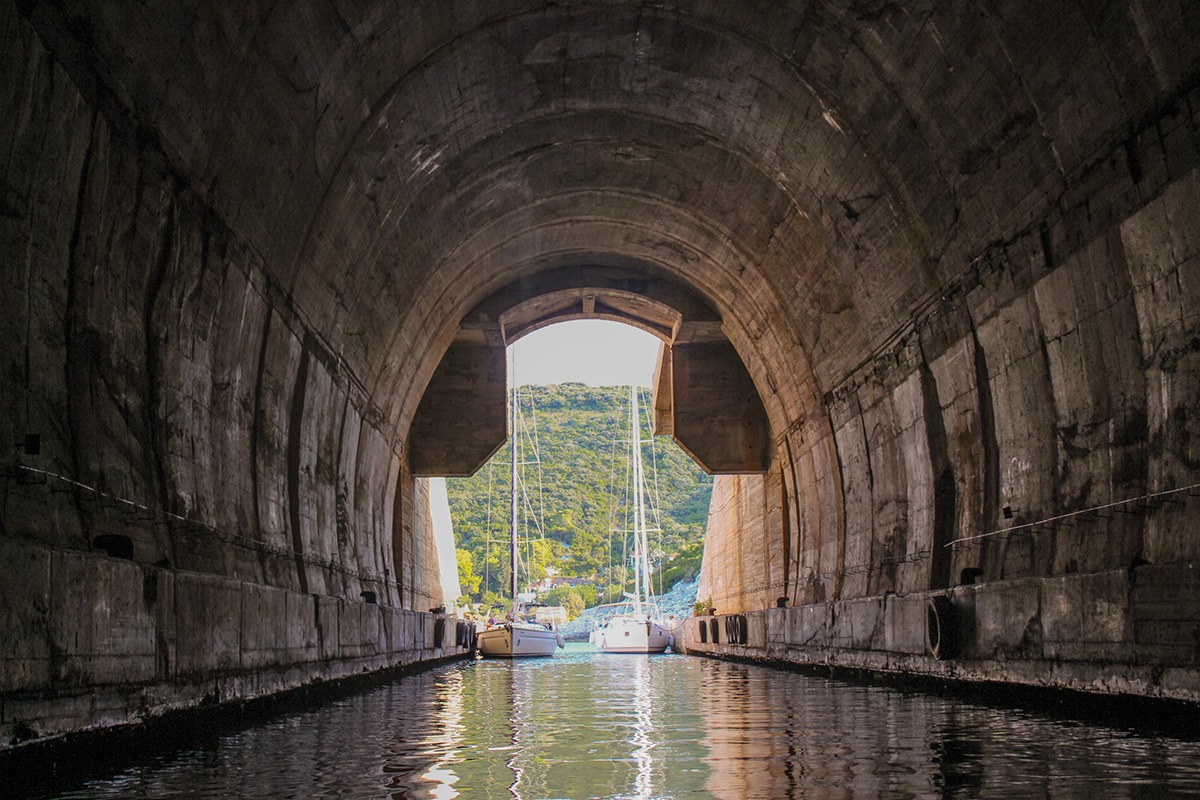 The entire island of Vis is pierced lengthwise and crosswise by networks of underground passages and chambers due to the military purposes of the former JNA army. There are also numerous other trenches, underground shelters, and bunkers on the island. One of the most impressive is the shelter for warships and submarines in Smokova Bay near the town of Vis. The whole complex is cut into the hill, and the space for warships reaches a depth of three hundred meters. From this excavation, narrow tunnels lead to the military complex at the top of the hill. Tourists today want to see the once modern shelters, which today have no purpose. Nevertheless, they stand there and show a turbulent historical period. The sea in this bay is calm, beautiful, and very clean. True lovers of nautical tourism are coming here just to enjoy. 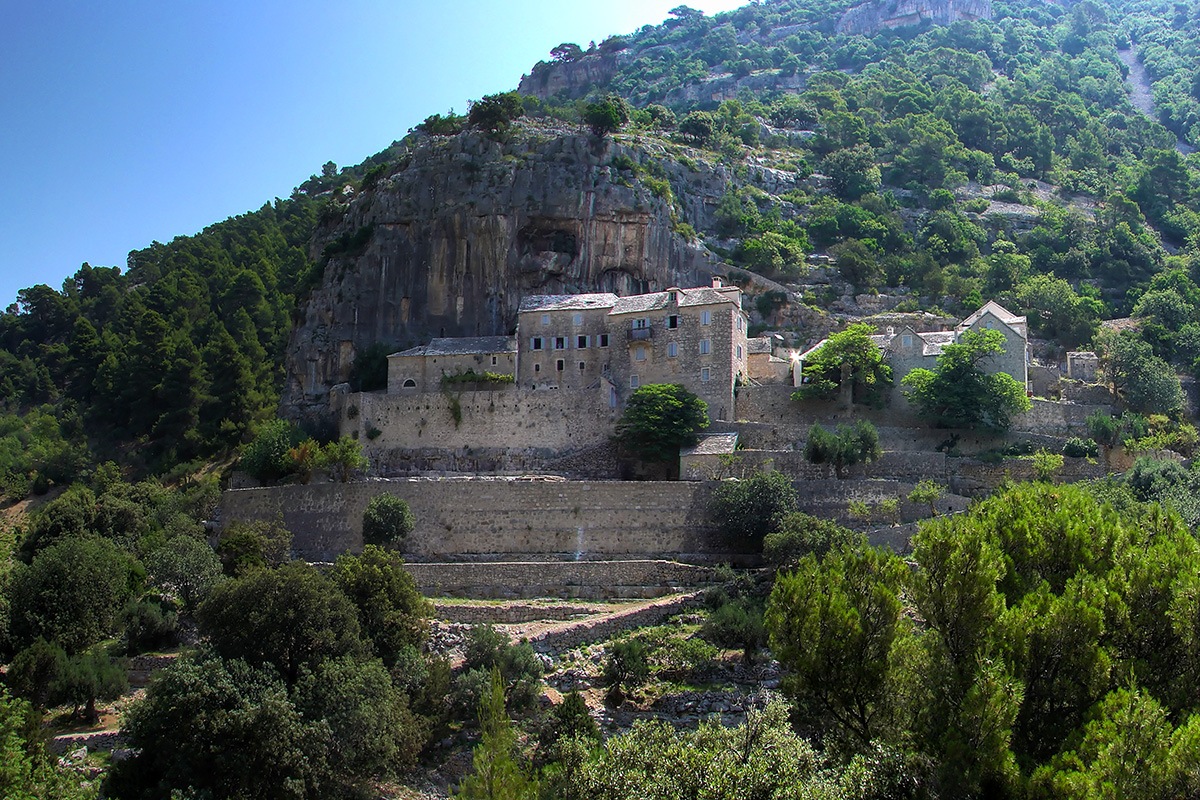 In a beautiful ambiance, on a small plateau below a steep cliff, lies the old monastery of Blace. Which looks like a carved gem, and is undoubtedly the most beautiful sight on the island of Brač. Glagolitic priests founded the monastery in the 16th century, when they were fleeing from the Ottoman conquests. The white-tiled roofs of playful uneven surfaces along the rough cliff create a picturesque harmony like a frozen fantasy of the spirit in this extraordinary space of peace and comfort. Today, there is a museum, which exhibits old furniture, kitchen, dining rooms, and various stylish furniture. However, the special feature of the museum collection is various astronomical devices, a rich collection of antique weapons and watches, and a rich library with works written in Croatian Cyrillic. The Blaca Monastery is a real natural, cultural, and historical monument. A wonderful harmonious environment, and memory of long-forgotten times. 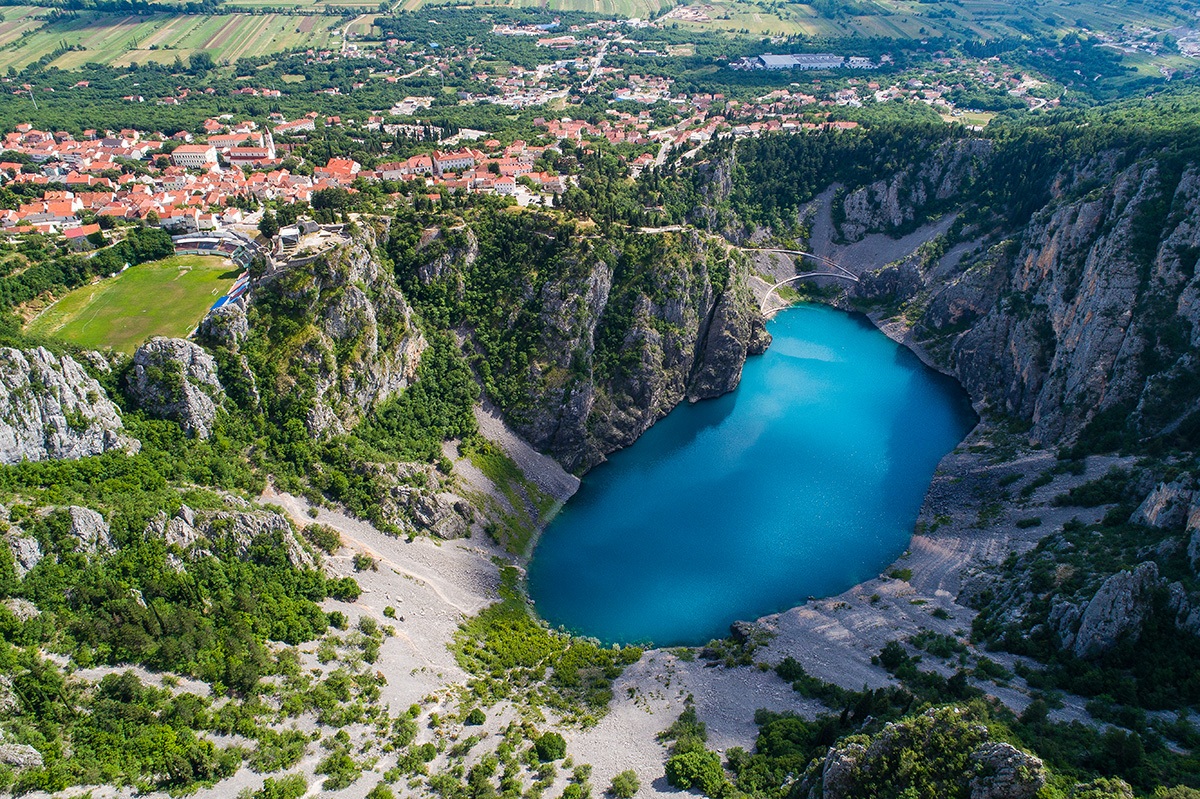 Blue Lake is one of the most beautiful Croatian karst lakes. Located at the very edge of the town Imotski. And it is one of the most fascinating destinations in the Dalmatian hinterland. The water in the lake is turquoise, which is unusual. And with its beauty and unusual shade of blue, it always attracts the attention of the people of Imotski and tourists. When the lake dries up, locals are traditionally playing football at its bottom. There is an access road to the water that leads almost to the bottom. Beautiful karst lakes will leave you breathless. And the stunning Blue Lake will show you a shade of blue that you have never seen before and will never forget. Countless texts have been written about the Blue Lake, hundreds of songs have been sung. But to this day, there are no real words to describe its beauty. 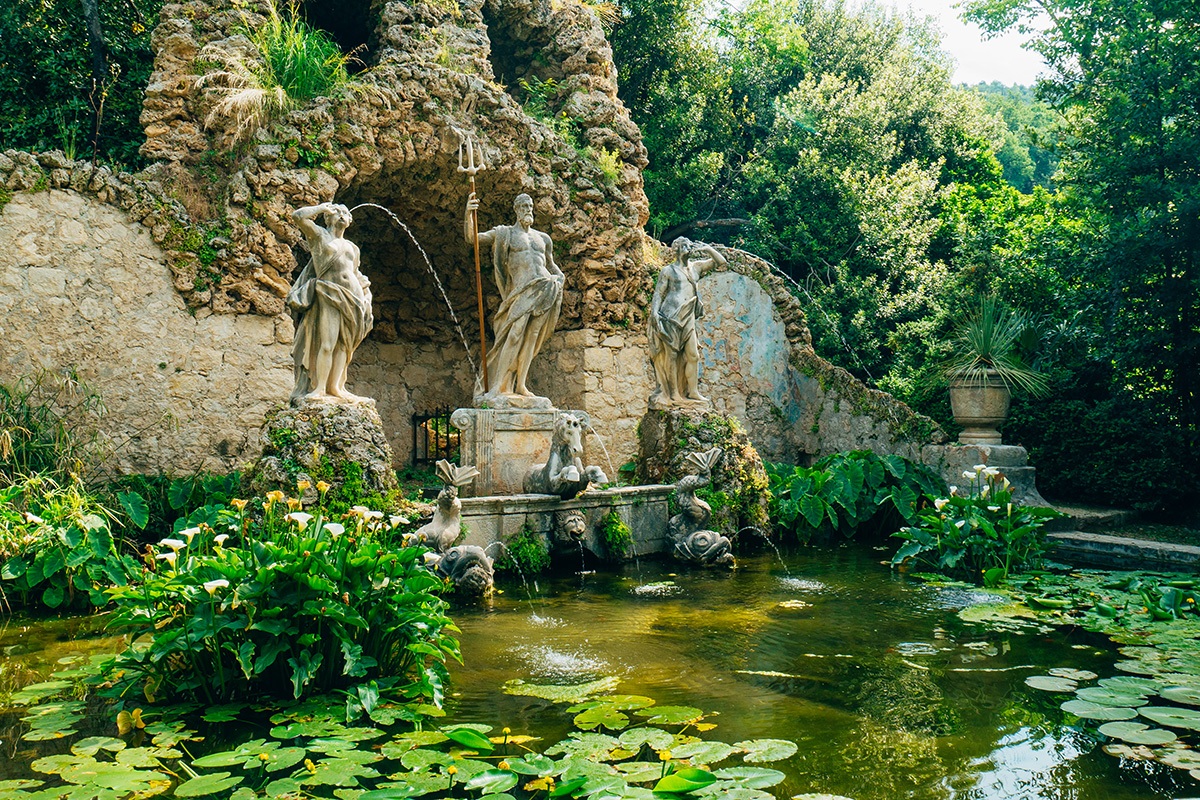 The Arboretum in Trsteno is the only arboretum on the Croatian Adriatic coast. The oldest Croatian monument of garden architecture, and the oldest arboretum in the world. Within the arboretum is a baroque fountain, named after the Roman god Neptune. It is widely known for its historical parks and a large collection of Mediterranean and world flora. In the arboretum, you can see a large number of exotic species of trees. Sailors brought their seedlings from their long voyages. The entire arboretum covers 28 acres. And except nature, you can admire the Renaissance mansion, walk to the sundial, relax in certain parts of the arboretum listening to the song of crickets. You can also see an aqueduct modeled on those of the ancient Romans, old mills, nymphs, and more. 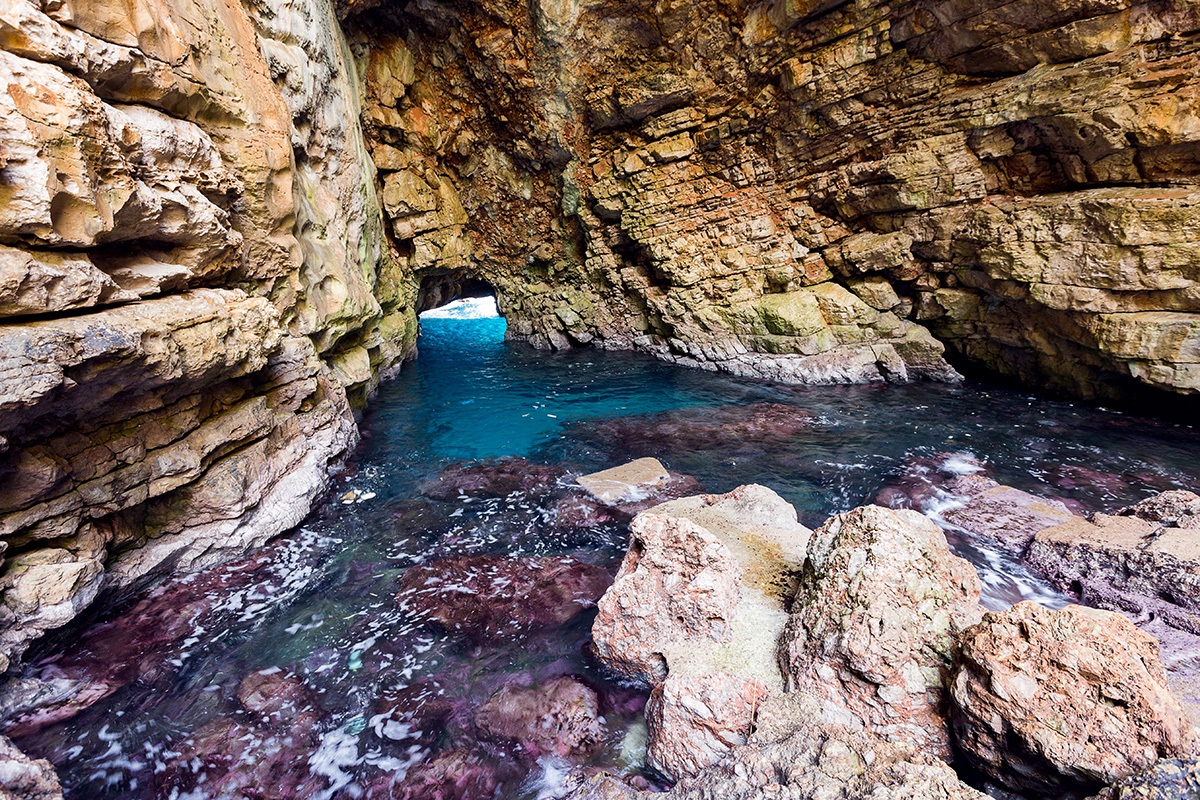 Odysseus Cave is located on the south side of the island of Mljet. The sea penetrated through the limestone layers and that created a tunnel. You can enter in a cave from the seaside by swimming during the calm sea. Odysseus’ Cave is the place where, according to legend, Odysseus, after a shipwreck on the nearby Ogiran cliff, swam to the cave where he took refuge from a severe storm. The beauty goddess nymph Calypso ruled on the island. And Odysseus succumbed to the charms of her irresistible beauty as well as the beauty of the island. Odysseus Cave was once the natural habitat of the Mediterranean seal, one of the rarest mammals in the world. In the summer months, around noon, when the sunlight hits the cave area the hardest, the cave creates a spectrum of colors in the sea. 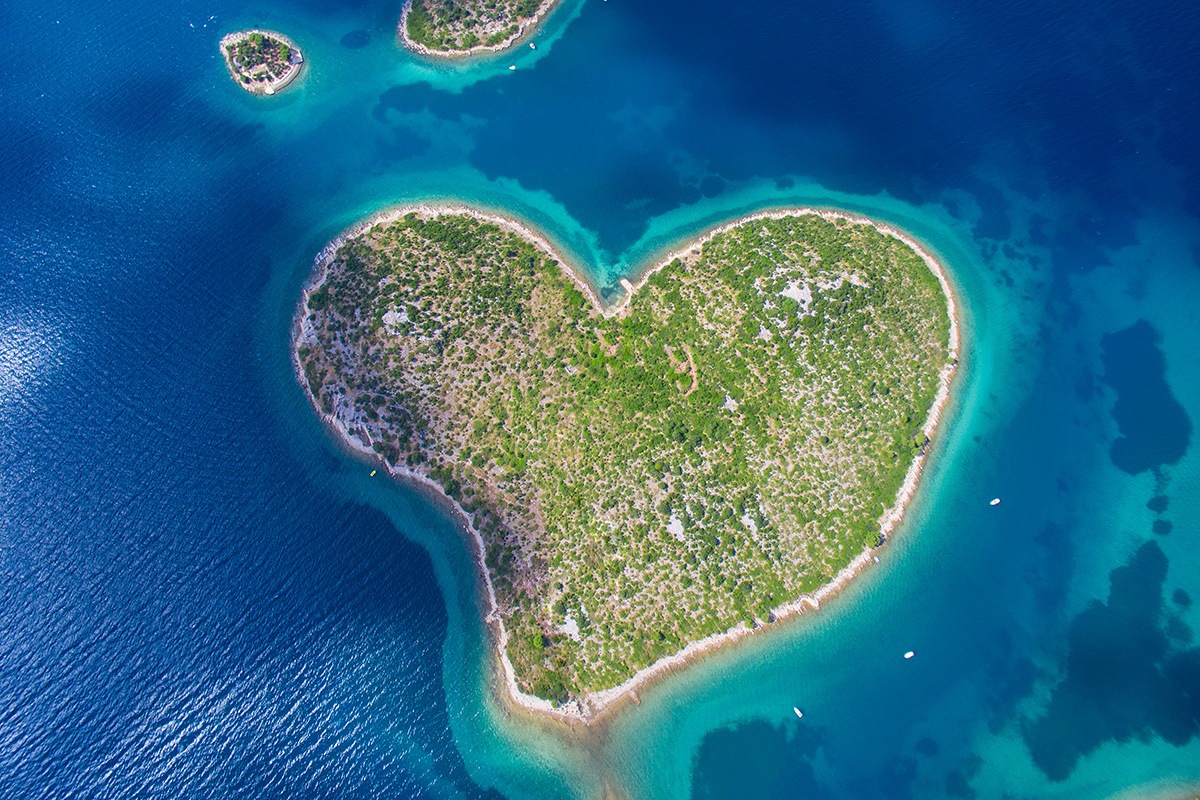 Although small, the island of Galešnjak attracts a lot of attention from the domestic and world public. It all started when Google Earth declared it one of the few natural heart-shaped phenomena. Although its fame is attributed to Google, historical data show that its interesting shape was noticed by Napoleon’s cartographer as far back as 1806. The popular name of this heart-shaped island in the northern part of the Pašman Channel is the “Island of Love” due to its specific shape. True visitors of the island are lovers and those who say a fateful “yes” on it, and metaphorically sail into marital waters. There are only three heart-shaped islands in the whole world. But only Galešnjak never changes its shape. Neither harsh winters, strong tides, neither winds could find a way to harm this beauty. Want to visit Galešnjak? Find accommodation near the island on Visitteo.