With more than 1000 islands, natural beauty, spectacular rocky coast washed by the cleanest Mediterranean sea and small historic towns, Croatia is a perfect summer destination. Still, you can enjoy its untouched nature, dynamic cultural scene and priceless architectural wonders regardless of the season. What to visit in Croatia depends on your specific tastes and interests. Below we bring you the 9 most charming small towns that Croatia has to offer. 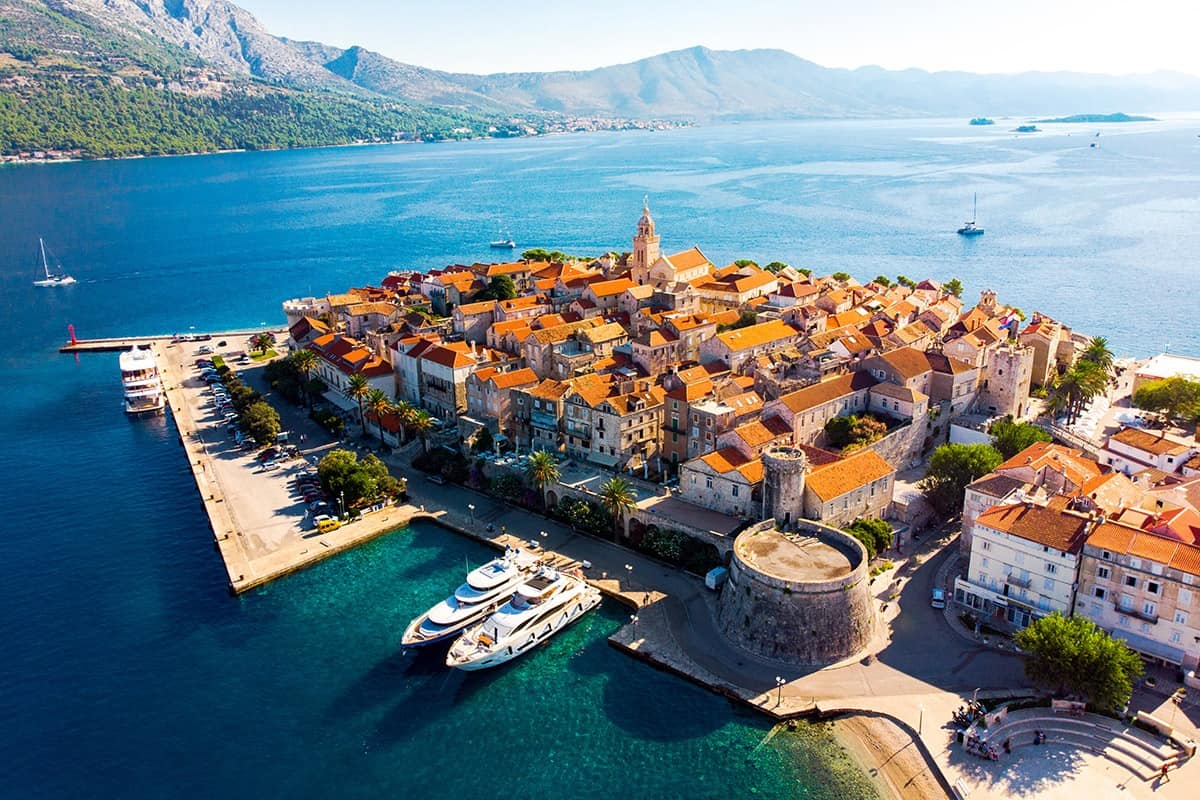 Korčula is one of those places on the Adriatic that is always on the list if you are looking for a peaceful and relaxing holiday. Mild climate, unrealistically clean sea, rich historical and cultural heritage and hospitable hosts make the island of Korčula one of the favorite destinations in Dalmatia. As in most of the coastal towns in Croatia, the tradition is still alive and ubiquitous on Korčula. Eternal religious rites, folk music, and dances continue to be performed to the delight of the growing influx of tourists. The jewel of the island is undoubtedly the town of Korčula, a collection of exceptional Venetian-Gothic architecture on a narrow peninsula. 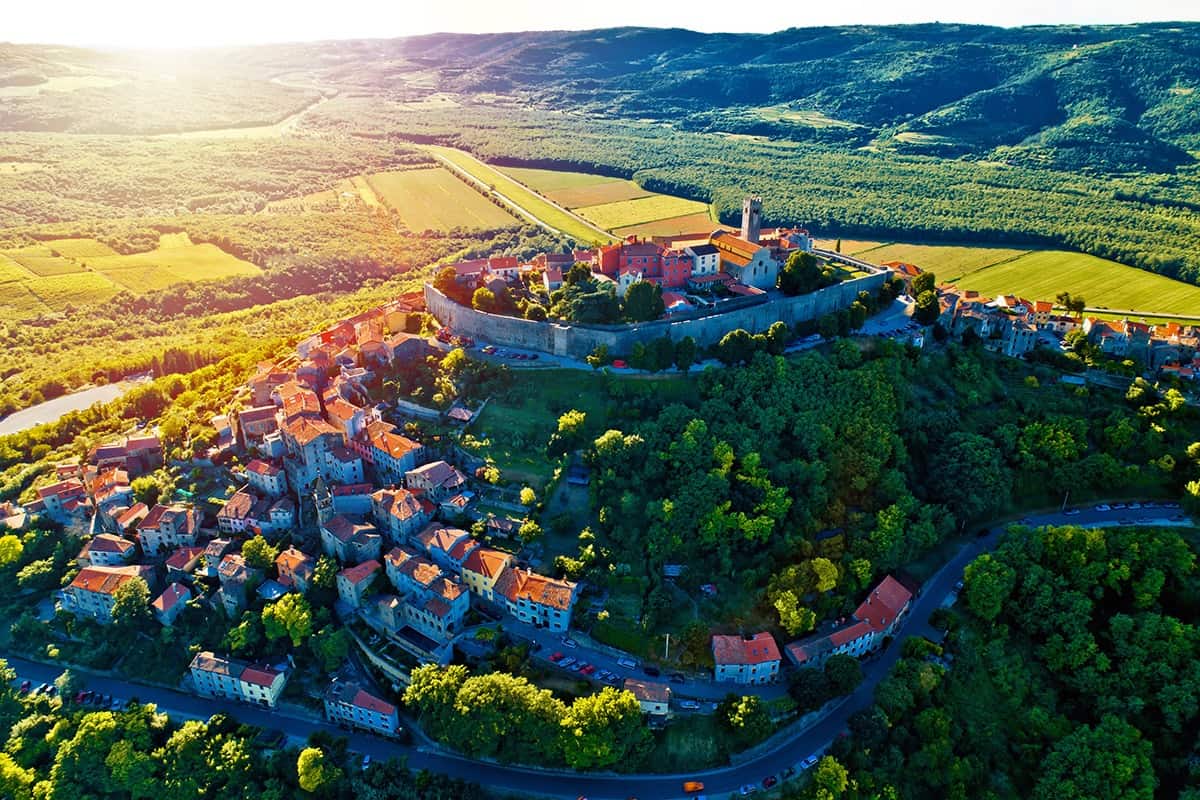 Motovun is a small town in central Istria and is the best-preserved medieval Istrian fortress built on top of a steep hill. A small place of rich historical heritage and beautiful picturesque landscapes. Motovun is a popular tourist destination that today attracts hedonists from all over the world. Its natural beauty and tourist offer attract a lot of attention, and it is a perfect holiday destination with family and friends. It is best known for the film festival that turns this sleepy place into a cultural and entertainment center every week of every summer. 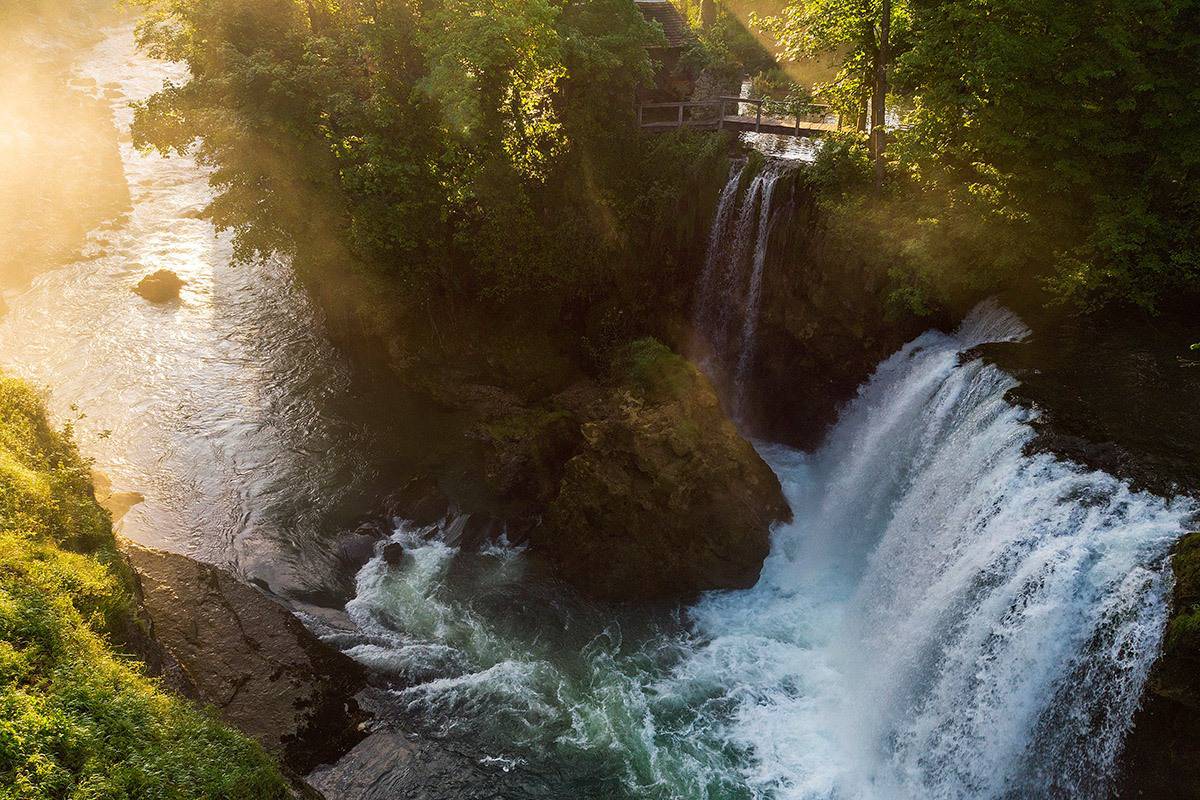 Rastoke, the mill pearl of the Slunj region, was created by the play of nature where the green-blue river Slunjčica flows over travertine rocks into the river Korana, creating many waterfalls, rapids, small lakes, and cascades. Due to their architectural, ethnographic, and natural value, Rastoke has been entered in the Register of Cultural Monuments for more than 40 years. Rastoke is the lobby of the Plitvice Lakes, from which they are about 33 km away, which is why they are also called Little Plitvice. The settlement of ambient value and authentic architectural heritage dates back to the 17th century. 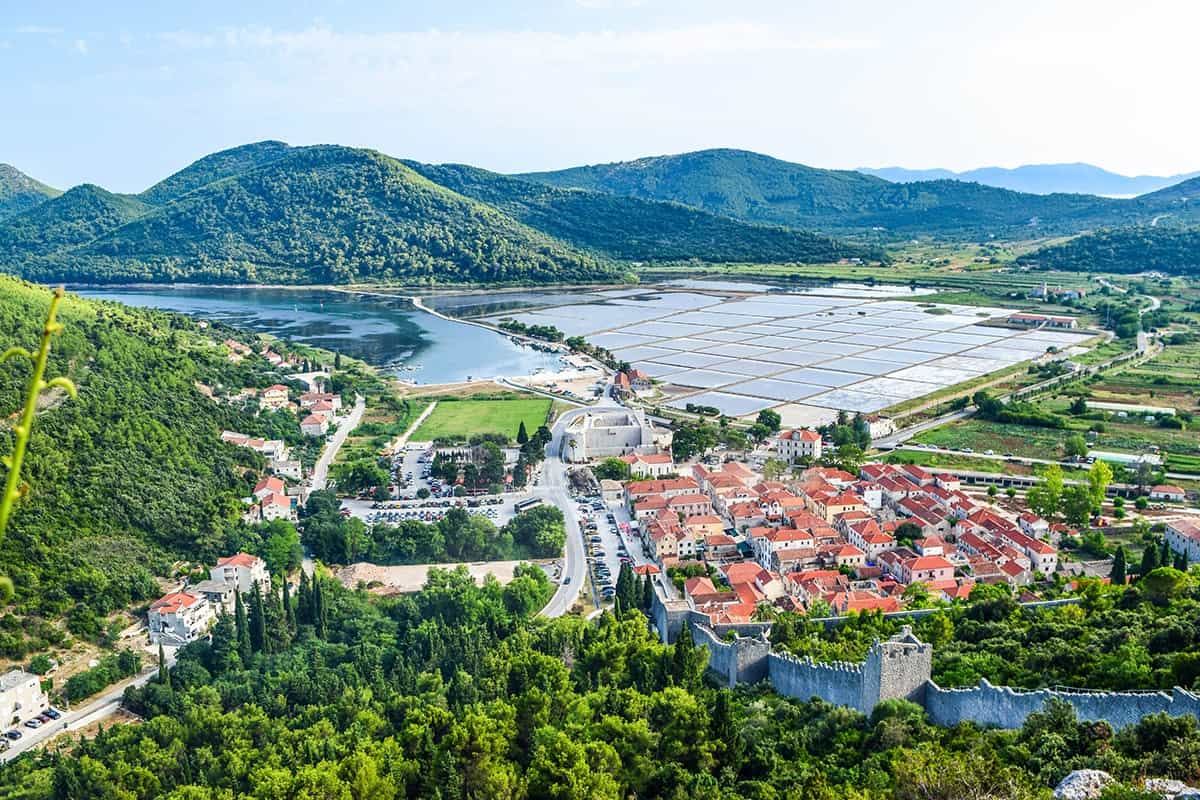 Quiet town, isolated and sleepy. Until the beginning of the 19th century, it was the economic, political, military, religious, cultural, and commercial center of the western part of the Republic of Dubrovnik. Ston is a small town located at the very beginning of the Pelješac peninsula. It is also known as the “city of salt”. Ston was founded as part of the Republic of Dubrovnik. It was essentially a defensive city, designed to protect the mighty Republic, with an impressive layout of walls and towers. The Ston salt pans are the oldest in Europe and the largest preserved in the history of the Mediterranean. 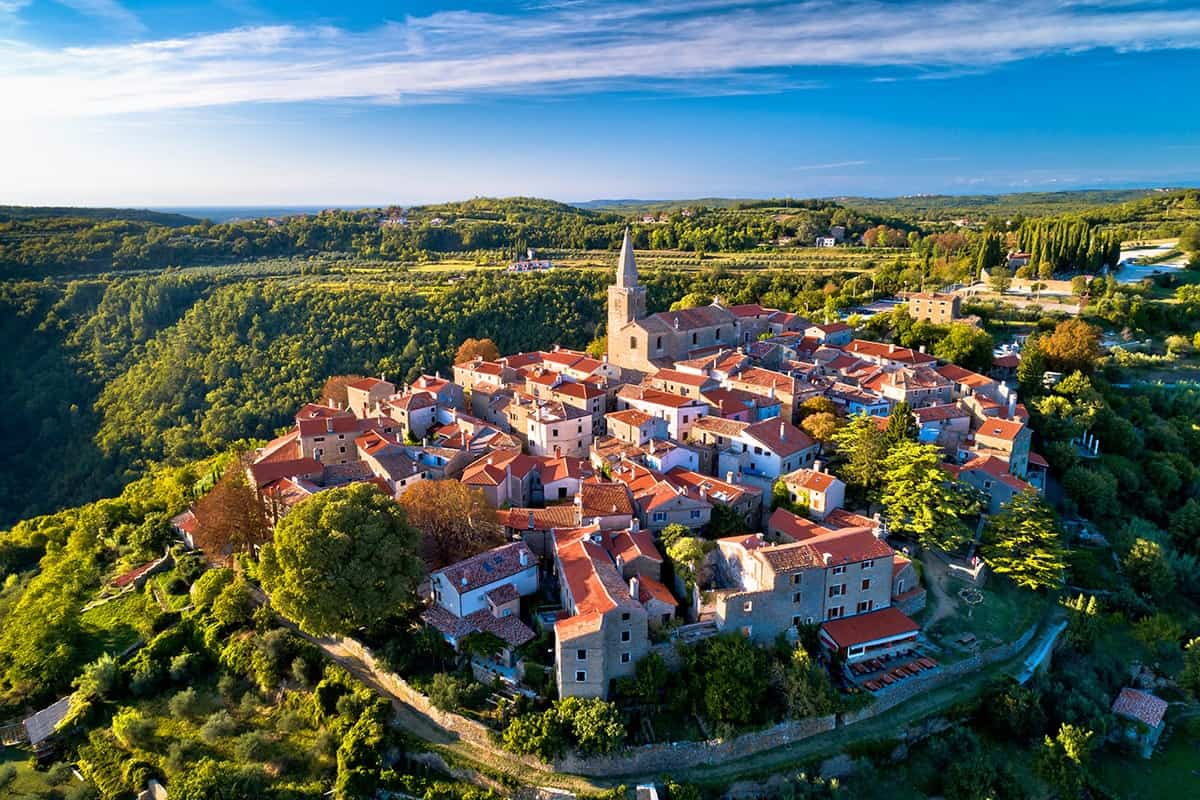 Only twenty minutes from Umag lies the medieval town of Grožnjan. The compact houses and the castle point to its medieval past and almost every entrance preserves its own story of ancient Graeciniana. Located in the middle of central Istria, surrounded by an incredible landscape full of olive groves and vineyards and blessed with one of the most beautiful views possible. Like many other towns in Istria, Grožnjan is no exception when it comes to views. The thick walls that surround the city, large stone gates and tall houses built next to each other create a magical atmosphere that has not changed much over the centuries. 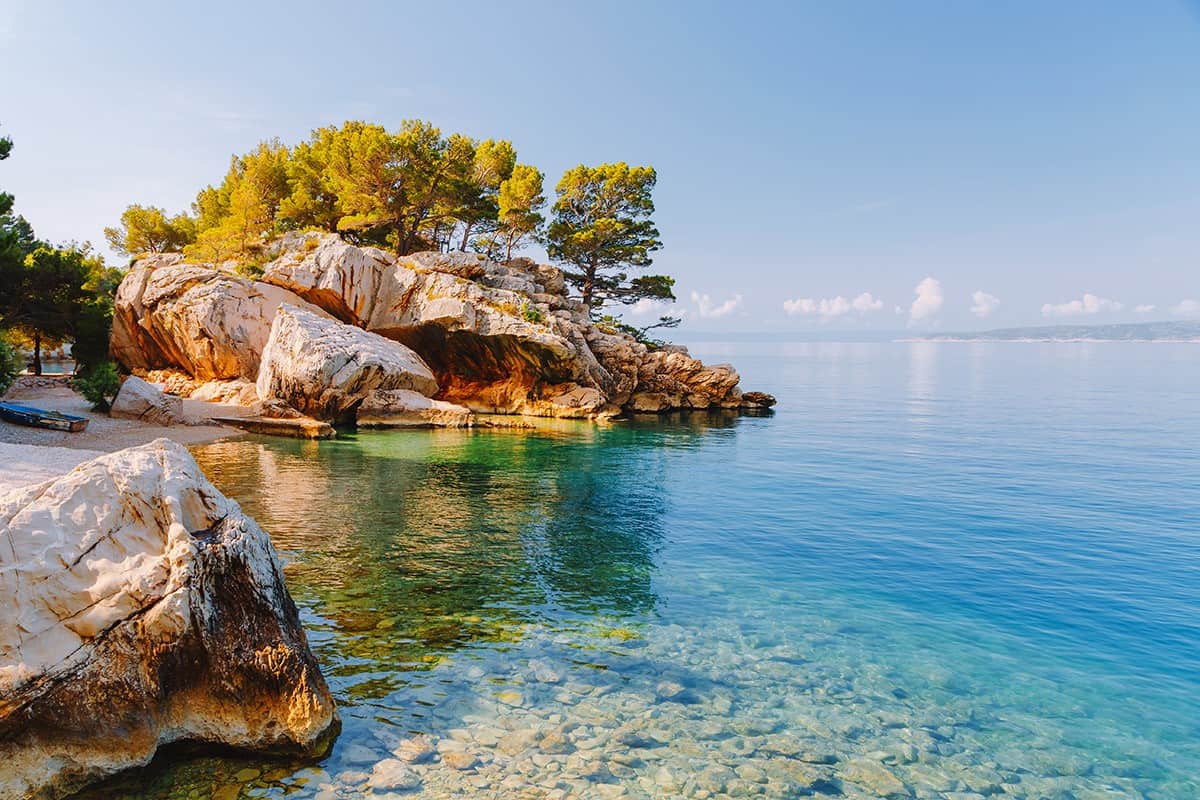 Brela is one of the most beautiful holiday destinations in central Dalmatia. With its picturesque position on the Makarska Riviera, with phenomenal beaches and the mighty mountains of Biokovo in the background. It is a beautiful town that has long pebble beaches and is quieter than Makarska. For these reasons, it is a popular resort for those looking for a relaxing type of getaway. In addition, the wide range of apartments and hotels makes your vacation in Brela a highlight, which guarantees that you will not forget it so quickly. 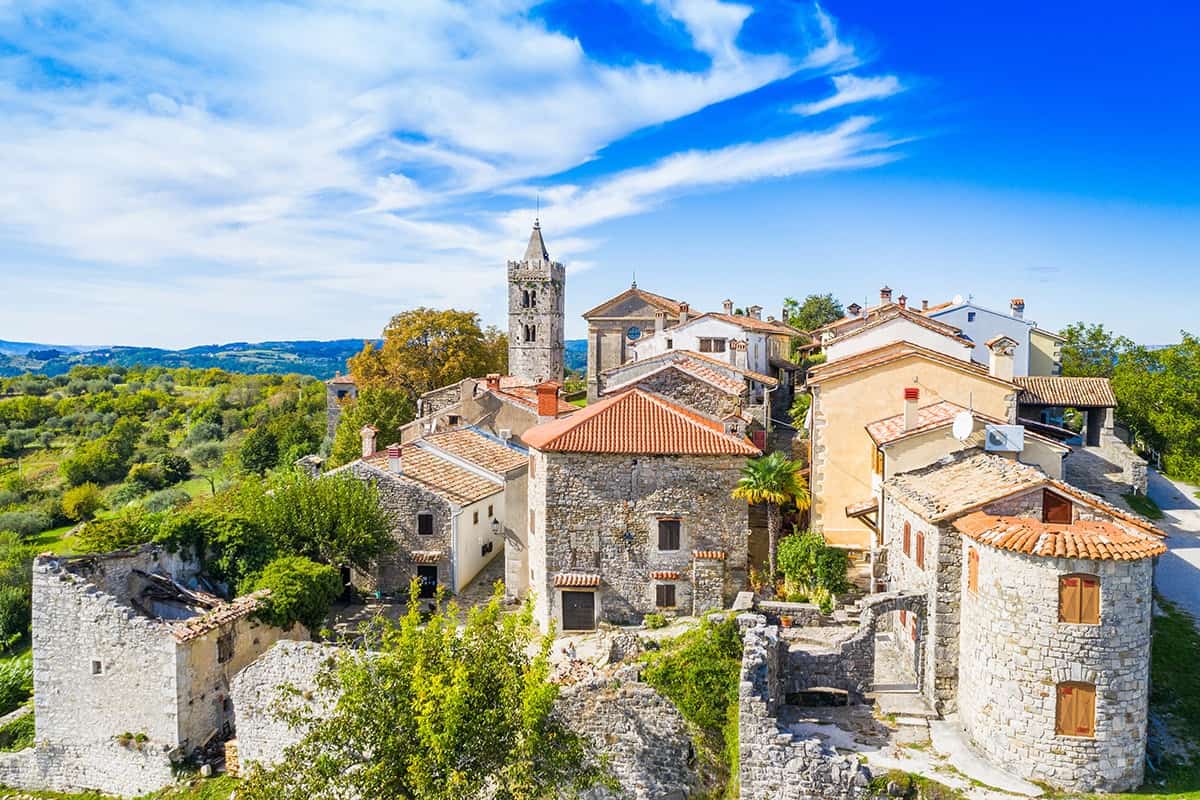 Hum is located in the center of Istria with barely 20 inhabitants. Often called the smallest city in the world. Hum is a symbol of architecture and medieval culture. And the entire city can rightly be considered a monument in itself. Legend has it that Hum was formed from stone leftover from cities built by giants in the valley of the river Mirna. Throughout history, the city has often suffered in conflicts, looting, and military campaigns. Its fortification system was often demolished and rebuilt. Today’s appearance of the city was completed in the 19th century. 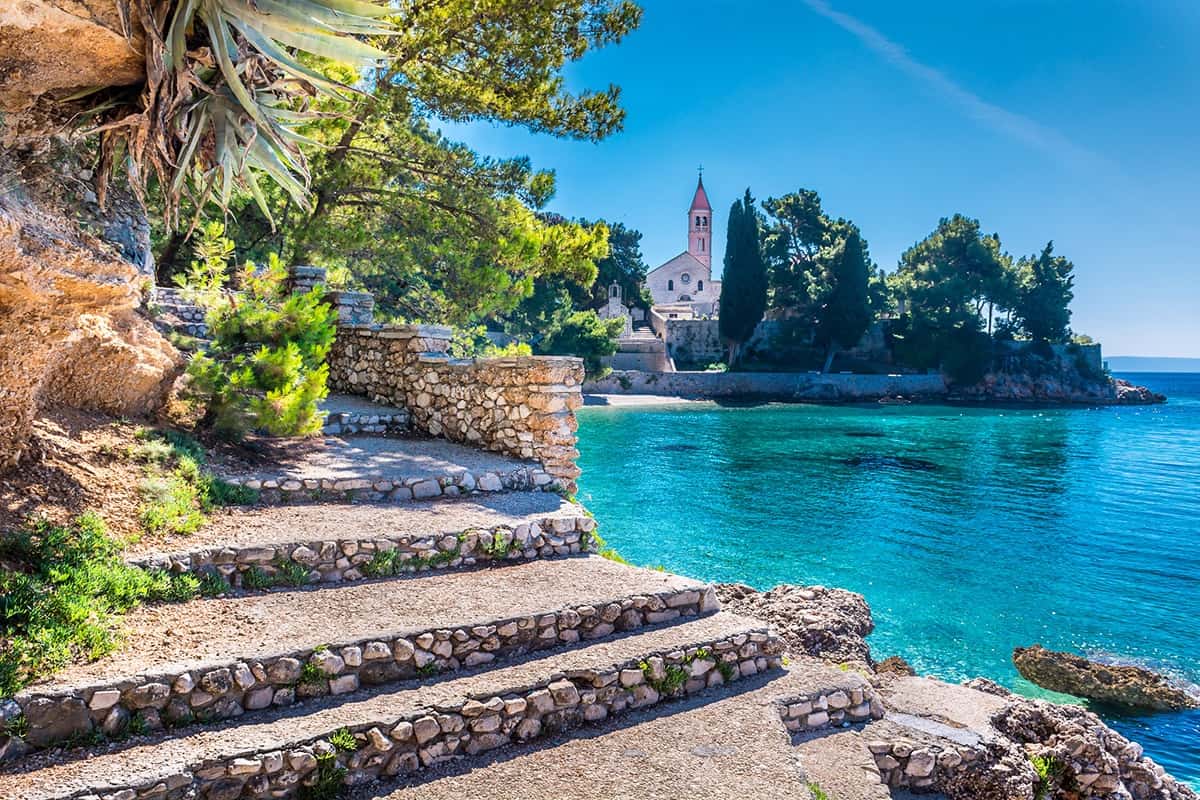 Picturesque Bol located on the island of Brač is one of the most beautiful destinations on the Adriatic. It is very popular among tourists from all over the world. The old town of Bol is an attractive place consisting of small stone houses and winding streets dotted with pink and purple geraniums. Although there are not enough real sights, many of its buildings are marked with interpretive plaques explaining their cultural and historical significance. Bol has many beautiful beaches. West of Bol is the beach Zlatni Rat, one of the largest and most beautiful attractions in the Adriatic. 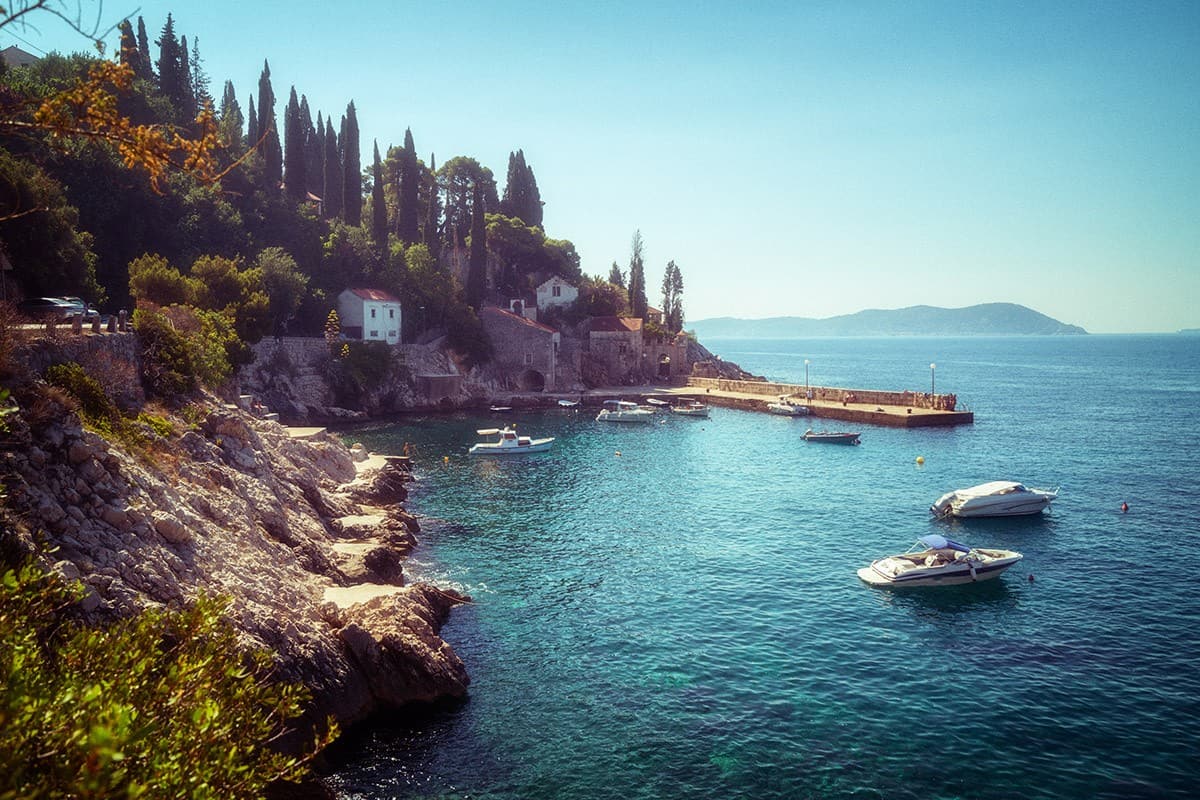 It is believed, according to numerous archaeological finds, that Trsteno was founded in the 5th century. At the beginning of the 14th century, the settlement became part of the Republic of Dubrovnik. Many members of the Dubrovnik nobility were enchanted by the natural beauties of Trsteno and began to build their summer houses there. The largest and most famous was the one built by the Gučetić-Gozze family, preserved to this day. The most famous natural and cultural attraction of this place is certainly the Trsteno Arboretum. Beautiful beaches and clear blue sea make Trsteno a peaceful summer destination from early spring to late autumn.

Want to visit these small towns in Croatia? You can find accommodation on Visitteo. Compare prices of hotels, apartments, rooms, studios, villas, and many other types of accommodation. Discover Croatia, get inspired, and find interesting destinations on our social networks – Instagram, Facebook, Twitter and YouTube