Traveling to the south of Croatia you will reach Ston and Mali Ston. Places of rich and exciting history on the Pelješac peninsula. Once an important defense center of the powerful Dubrovnik Republic. Today Ston and Mali Ston are gastronomic and tourist destinations in Croatia. These two towns are known for three things: salt, oysters, and the extraordinary defensive walls that connect them. The heritage of this area is invaluable, and of exceptional importance for the entire story of Croatia.

The name Ston comes from the Latin name Stagnum, which refers to the swampy nature of the land used for salt production. Saltern was so economically important for the Dubrovnik Republic, so they build one of the longest fortifications in Europe. The fortification system stretched from Ston to Mali Ston with towers, fortresses, and defensive walls. The walls still stand today, as the salt production in Ston also. Passed down from generation to generation, for four thousand years. From then until today salt is produced in the same way. Only with the help of the sea, sun, and wind. 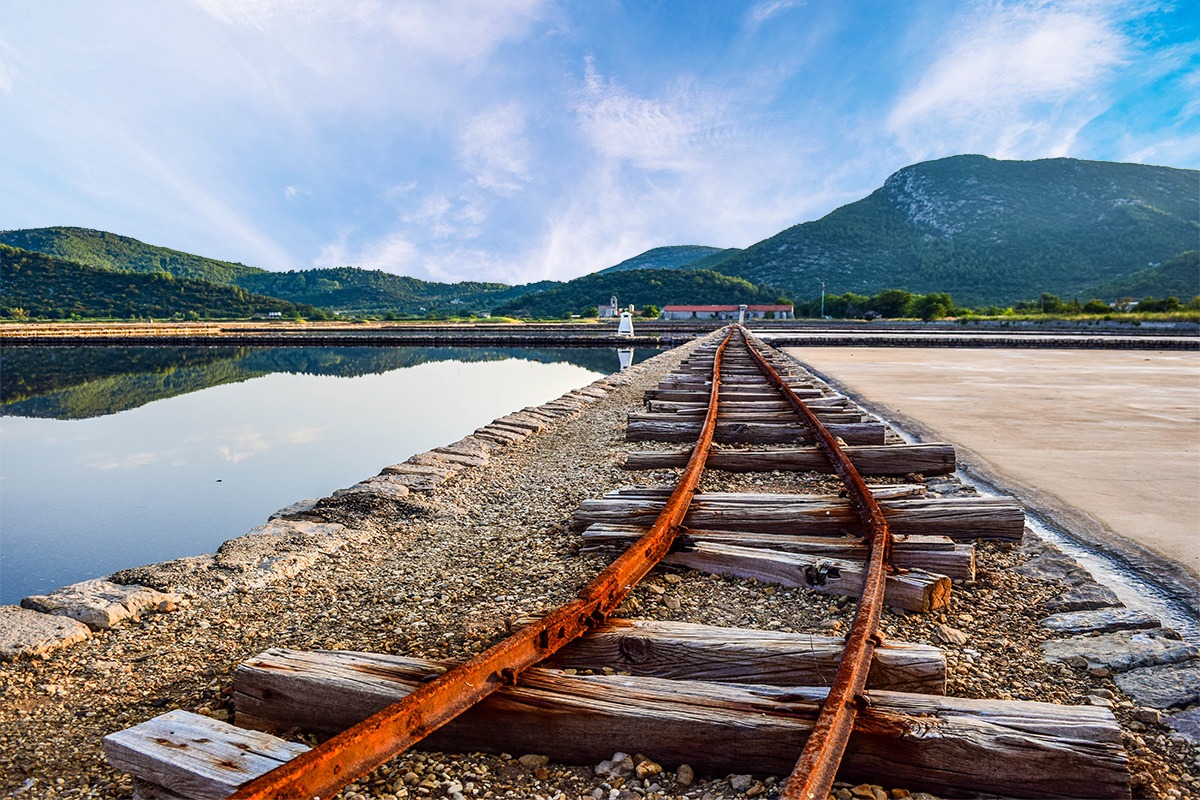 A visitor of Ston finds it difficult to imagine at first glance that he is – in importance and size, the second city of the former Dubrovnik Republic. A quiet town, isolated and dormant. Until the beginning of the 19th century, was the economic, political, military, religious, cultural, and trading center in the western part of the Dubrovnik Republic. Ston is a small town located at the very beginning of the Pelješac peninsula. It is also known as the “city of salt”. It is located just one kilometer southwest of Mali Ston. Ston was an important town for salt production. Strategically located on the Adriatic coast along important trade routes. Within the walls, Ston has an atmospheric medieval town center where you can feel the spirit of the powerful past. 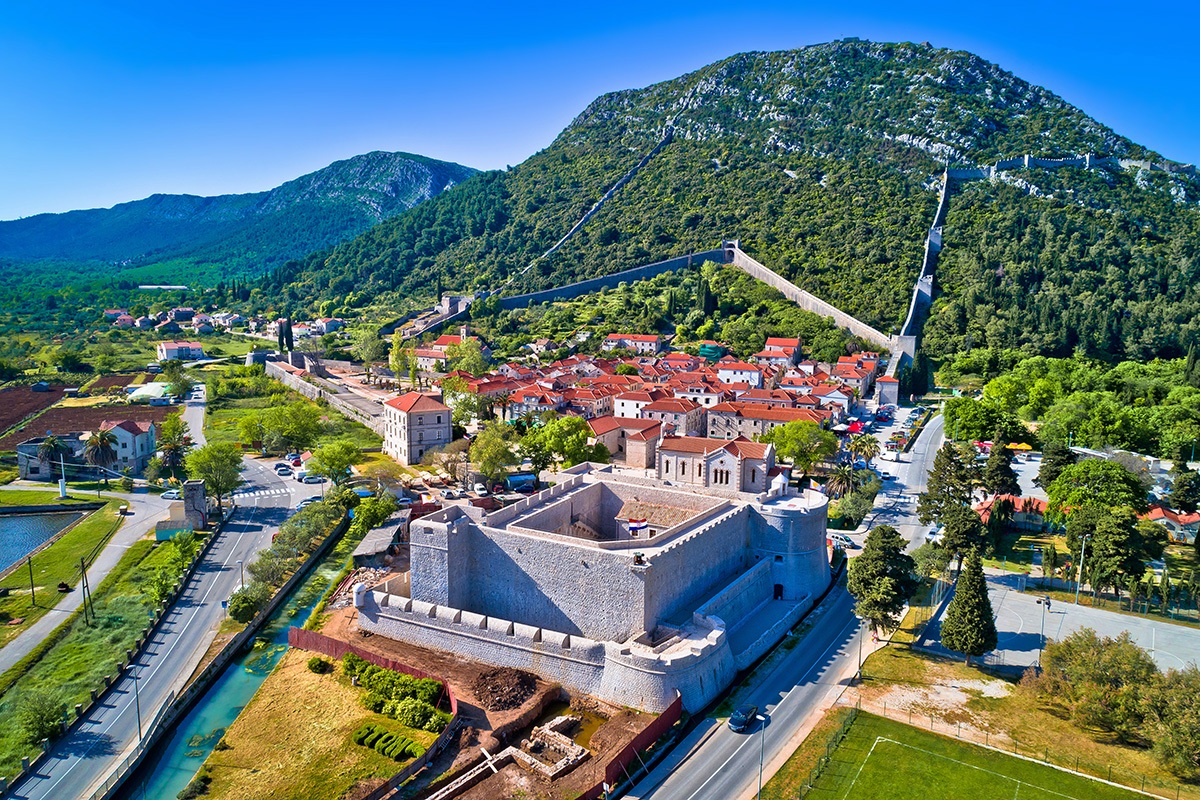 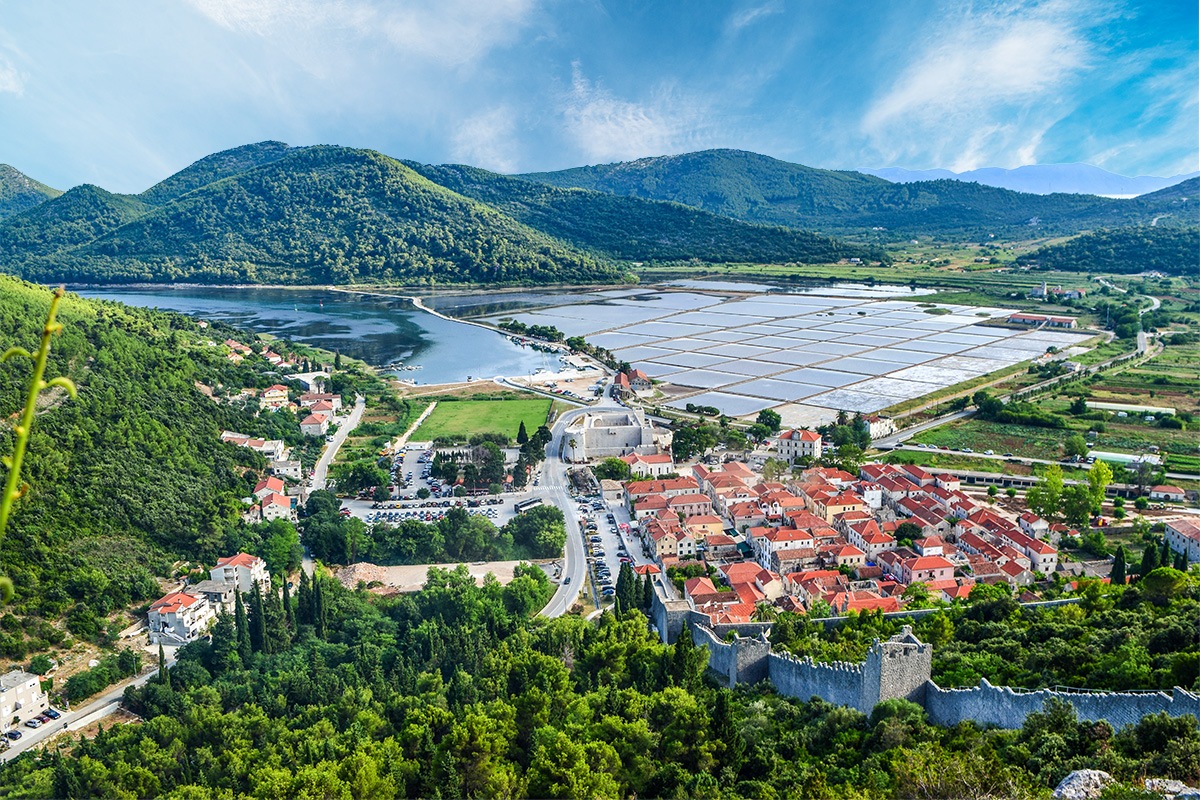 Founded in 1335 as part of the Dubrovnik Republic as a defensive city. Mali Ston (eng. Little Ston) was designed to protect a powerful republic. With an impressive layout of walls and towers. The most prominent feature is the Koruna Fortress, which rises above the city and is visible from a long distance. Mali Ston is a kind of gastronomic destination. Known for its mussels and large flat oysters that thrive in a narrow channel that separates the peninsula from the mainland. Which local families have grown them since Roman times. Mali Ston is a world ecological pearl and is an ideal vacation spot with plenty of beautiful bays and beaches. You can find accommodation in Mali Ston on Visitteo. 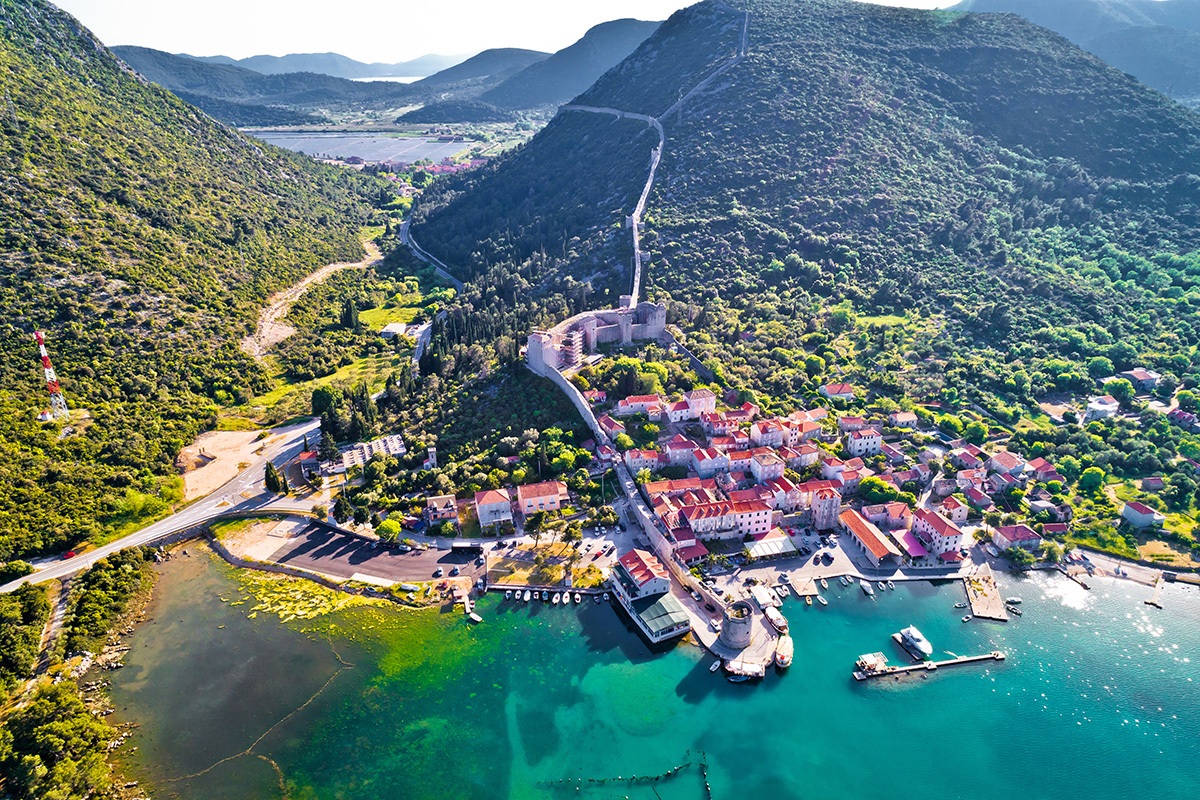 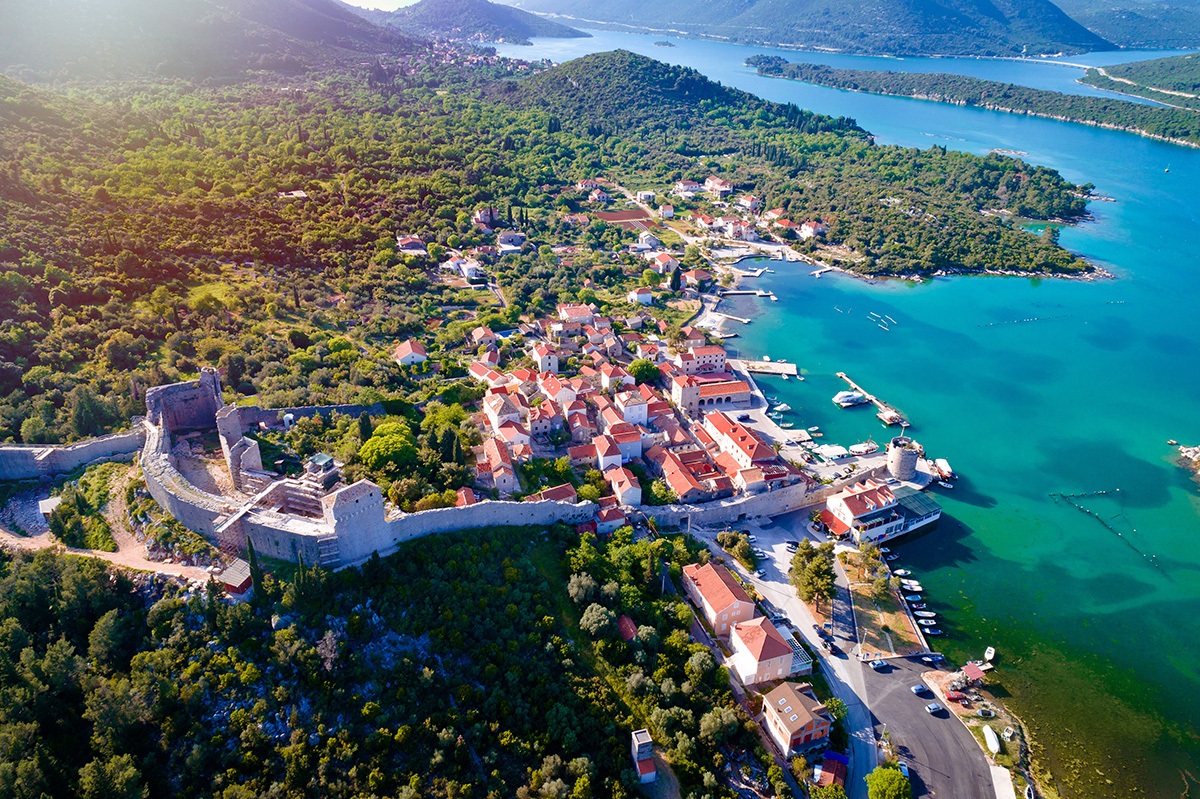 History written in salt and stone

The most important place of the Dubrovnik Republic, after Dubrovnik, in terms of its economic and strategic importance is certainly Ston. At the beginning of the 14th century, the city entered the sphere of interest of the Dubrovnik commune. Which was becoming stronger at that time. In 1326, Dubrovnik first most likely occupied the Pelješac peninsula militarily, and then in 1333 they officially bought it from the Bosnian ban and the Serbian king. From that year begins the rapid and planned growth of Ston.

The people of Dubrovnik first divide the land and draw a well-thought-out development and construction plan. Then they build walls, houses, palaces, fountains, churches, and monasteries. In a short period, the Dubrovnik Republic raised a monumental defense system for protection. The largest fortification, and urban project in Europe at the time. And the Dubrovnik Republic began the construction of the Ston on the south and the Mali Ston on the north side of the narrow isthmus that connects the peninsula with the mainland. This fortification was important to the people of Dubrovnik not only for the preservation of their Pelješac estate but also for the preservation of a valuable monopolistic item – salt.

Preservation of walls and fortifications

With the disappearance of the Dubrovnik Republic, negligence and often incomprehensible interventions of the 19th century. Such as the demolition of the city walls in Mali Ston to combat malaria. With the demolition of the city wall in Ston due to the arrival of Austrian Emperor Franjo Josip on an official visit. The monumental Ston fortification complex collapses. Lately, thanks to the Society of Friends of the Dubrovnik Walls. The renovation of the Ston fortifications and towers has been slowly but surely continuing. The Ston complex is already beginning to live again in its old dignified appearance. 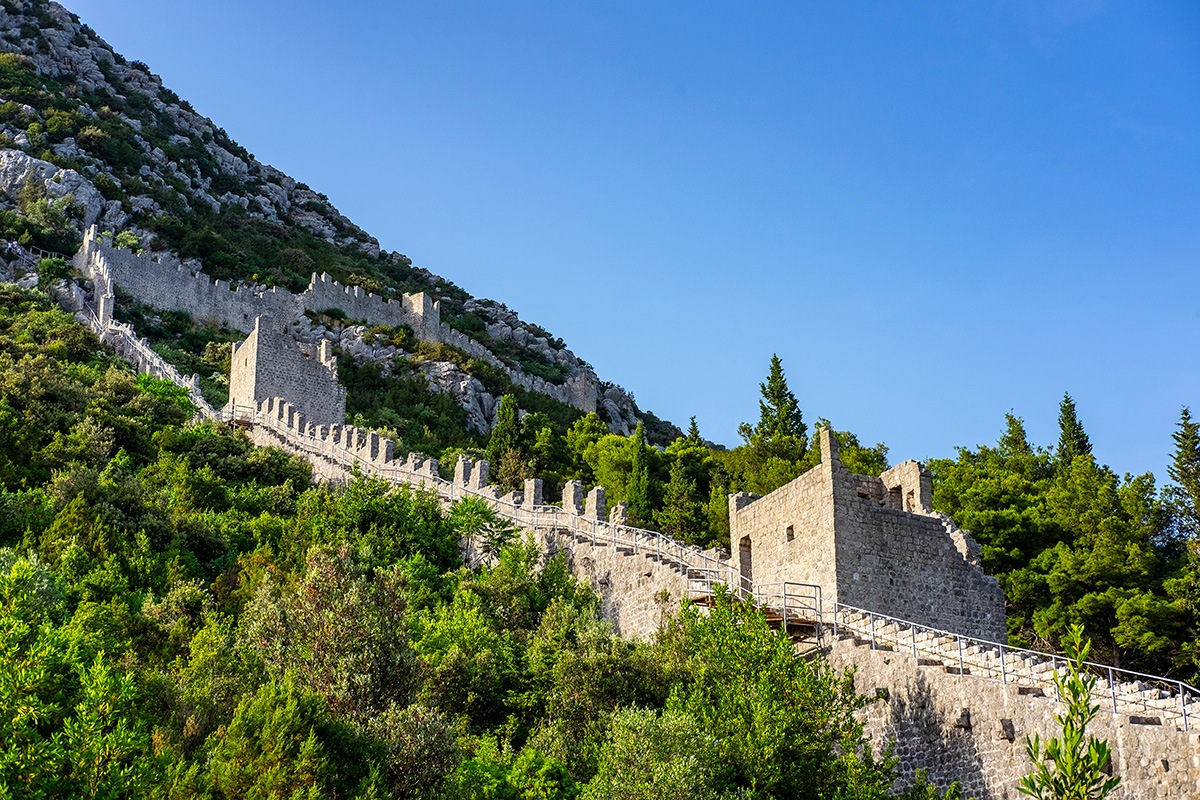 Thanks to its geographical position, fertile fields, an abundance of water, and the short isthmus that connects the Pelješac peninsula with the mainland. The Ston area has become an important residence for humans since ancient times. Saltern dates back to Roman times, two millennia before Christ. Before Romans, Illyrians and Greeks inhabited this area. The exploitation and harvesting of salt in the Ston area begin when Romans came into these lands. The Ston salterns are the oldest in Europe and the largest preserved in the history of the Mediterranean.

Salt was obtained by the process of evaporating seawater in large shallow basins of the salters. The season of harvesting and producing salt lasts in the summer months. The present-day salters which date from the time of the Dubrovnik Republic and their overall design, perfectly represent the complex production of salt from the Middle Ages. And they are a first-class cultural monument. The method of production has not changed all these centuries. And in such ecologically healthy conditions, excellent quality of salt is guaranteed. Which satisfies all the needs of the advanced economy of modern times.

Importance of salt for Ston and the Dubrovnik Republic

Apart from supplying the local population, salt from Ston was one of the main export items of the Dubrovnik Republic, which traded with it throughout the entire Balkan Peninsula. The income from salt was high, 1/3 of the total income. Along with Dubrovnik, Ston was economically and strategically the most important place of the Dubrovnik Republic and the second most planned city in Europe. The Dubrovnik Republic used pools with a granite bottom. From these pools, they extracted the purest salt for the Viennese court. 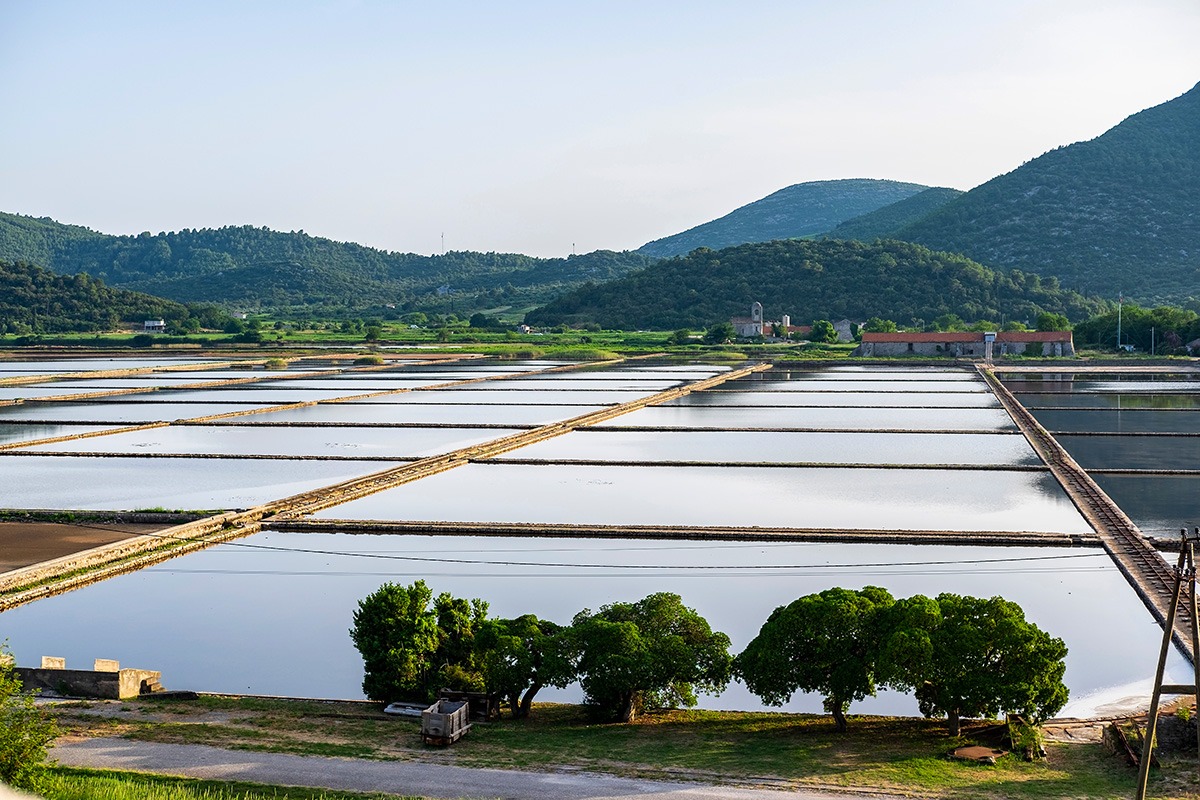 The Dubrovnik Republic built a monumental defense system for protection, a large fortification, and an urban project. They build 41 towers, 5 fortresses, and a 5.5 kilometer-long defensive wall. In order to preserve the greatest value in the depths of the bay – Ston salterns. The construction of the imposing fortification complex, which we call the Ston Walls, began soon after the Dubrovnik acquisition of Pelješac. First, they build a defensive wall, from one side of the peninsula to the other. And according to a unique project, they build two fortified towns. On the south side Ston and on the north Mali Ston. To gather people to guard the borders and work in salterns.

Above the western steep slopes of Prevlaka, the Great Wall is separating Pelješac from the mainland. The wall is about 1200 m long, led over the top of Podzvizda hill. Closing the entire peninsula, ending in towers on the shores of the Ston channel and Mali Ston bay. The Ston system of fortifications was formed, however, over more than four centuries. Intended primarily for the defense of the peninsula from its mainland hinterland. It has been gradually improved, adapted to the terrain, and the development of military equipment. Ston fortifications are without a doubt the largest construction project of the Republic outside Dubrovnik. The walls and fortresses are flanked by 10 round and 31 square towers and 6 semicircular bastions. They retained their defensive role until the beginning of the 19th century. After the fall of the Republic, the Ston fortifications lost their military significance. 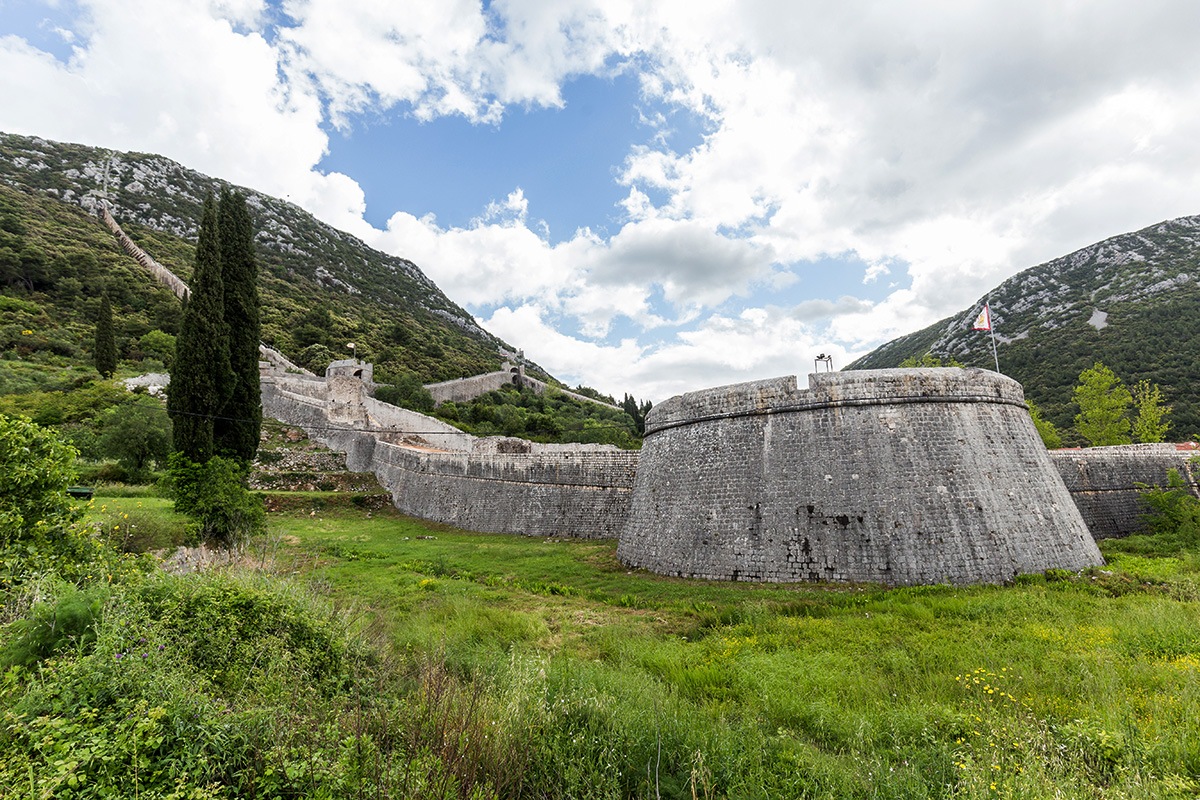 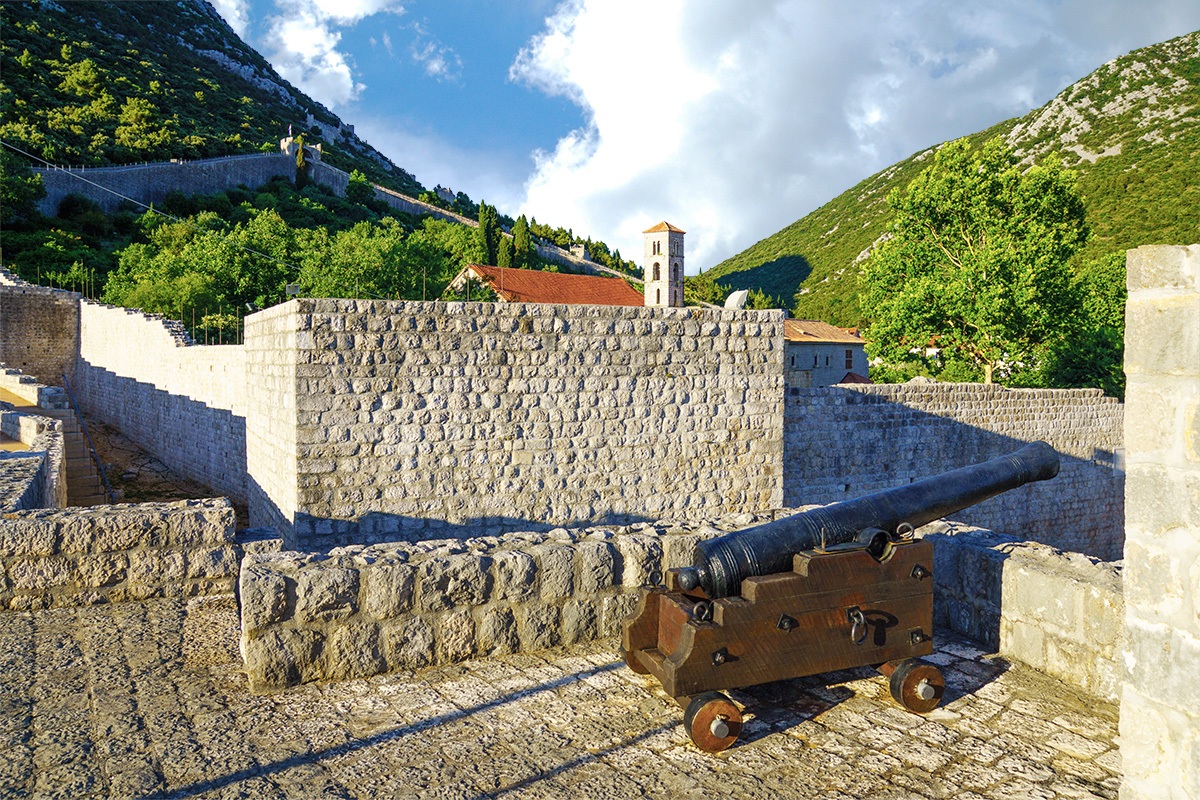