Indeed, cathedrals in Croatia, these glorious structures. Fueled by deep devotion and created by the man’s ego, are precisely where faith and superior architecture meet. Croatia is home to many cathedrals, stunning and wondrous sights to behold. Regardless of your religious affiliations, there’s something quite grand and majestic about these iconic structures. And walking inside and around the exterior is always an enthralling experience.

With their humble designs and intense aura of ancient times, the following cathedrals are among the most impressive sights in Croatia and beyond. These buildings are not only places of worship and centers of attraction for visitors. But sources of long-forgotten stories as well. Whether you prefer their Renaissance, Baroque or Gothic side. The following cathedrals will genuinely uplift the spirits. These cathedrals are not only worth a visit on their own merit. The cities in which they reside offer rich history, culture, heritage, fabulous gastronomy, and well-known tourist sites. 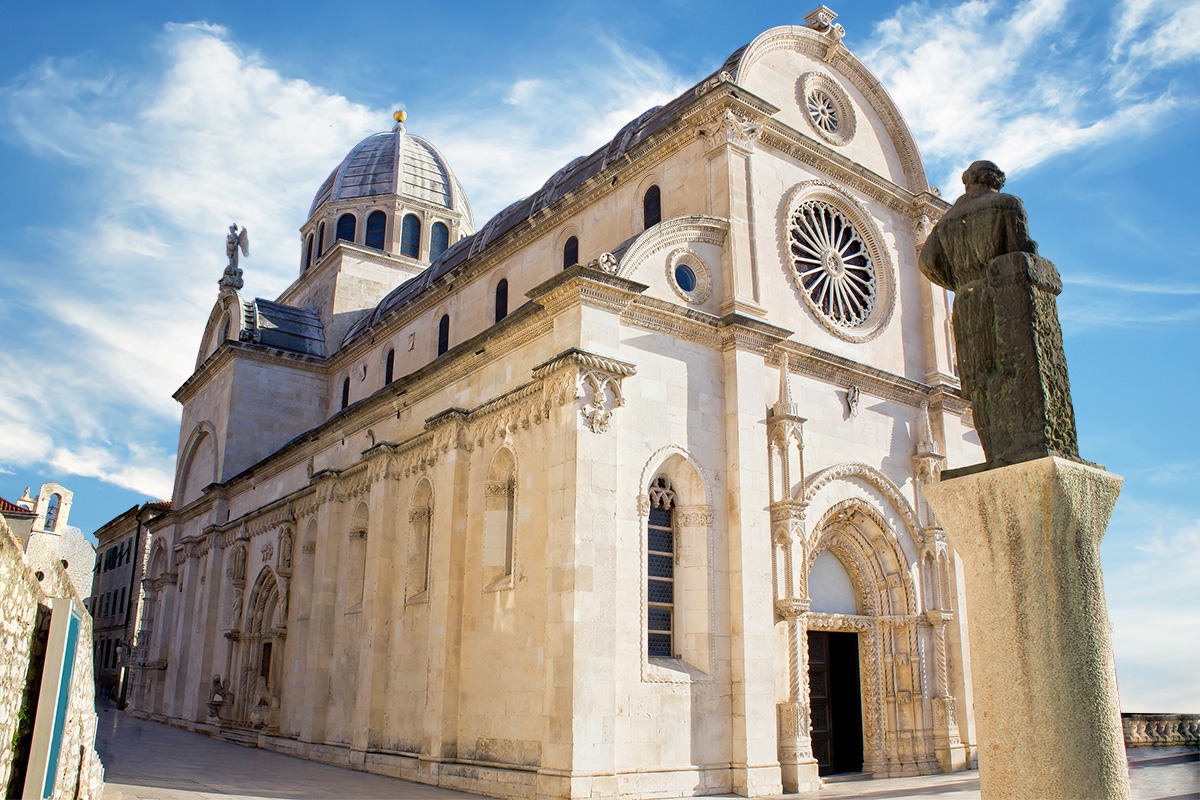 One of the most beautiful and most significant architectural and sacral buildings in Croatia is the cathedral of St. James in Šibenik. Which was placed under the protection of UNESCO in 2000 due to its exceptional values. What distinguishes it from all other dark and gloomy cathedrals is the unique atmosphere of light in its interior. Created in the urban structure of the city, on the site of an older church.

The cathedral forms an structure of a three-nave basilica with three apses. Gothic style is present at the beginning of construction. While the rest of the cathedral is Renaissance. It took over a hundred years to finish this glorious cathedral, during the 15th and 16th centuries. Cathedral is unique because it is completely built of stone without the use of a binder. Cathedral stands out with its imposing dome, which is today a kind of symbol of Šibenik.

2. Cathedral of the Assumption of the Blessed Virgin Mary, Dubrovnik 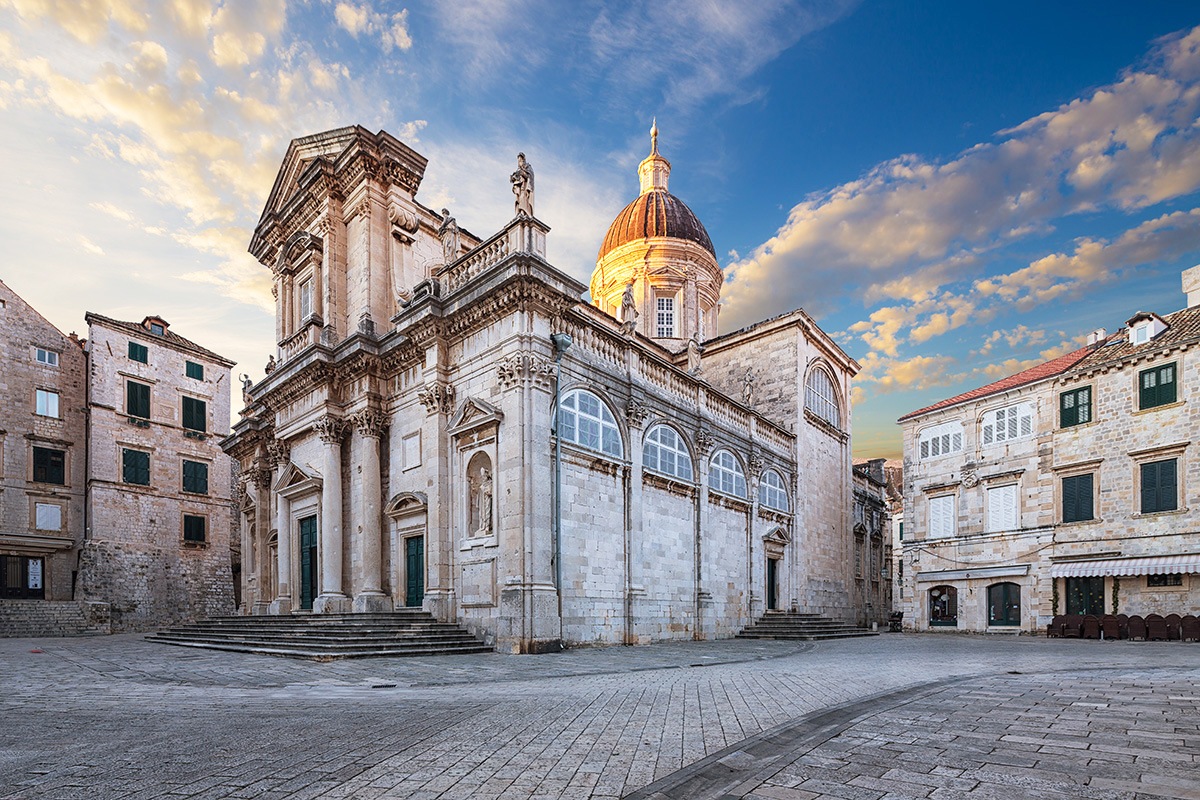 The Dubrovnik cathedral is not only a beautiful example of Dubrovnik’s rich history and art. But also an intriguing archaeological site that raises numerous questions about Dubrovnik’s history and heritage. Today’s Dubrovnik cathedral is the third cathedral that was built on the same site. The first was from the Byzantine era. The second Romanesque cathedral, for which construction the English King Richard the Lionheart was largely responsible, was destroyed in the great earthquake in 1667. The present cathedral was built in the Baroque style by the Italian architect Andrea Buffalini. And it was completed in 1713. The interior of the cathedral is beautiful and adorned with significant works of art. Above the main altar, which is built of purple marble, is a painting of the Assumption of Mary from the 16th century by the great Italian painter Titian. 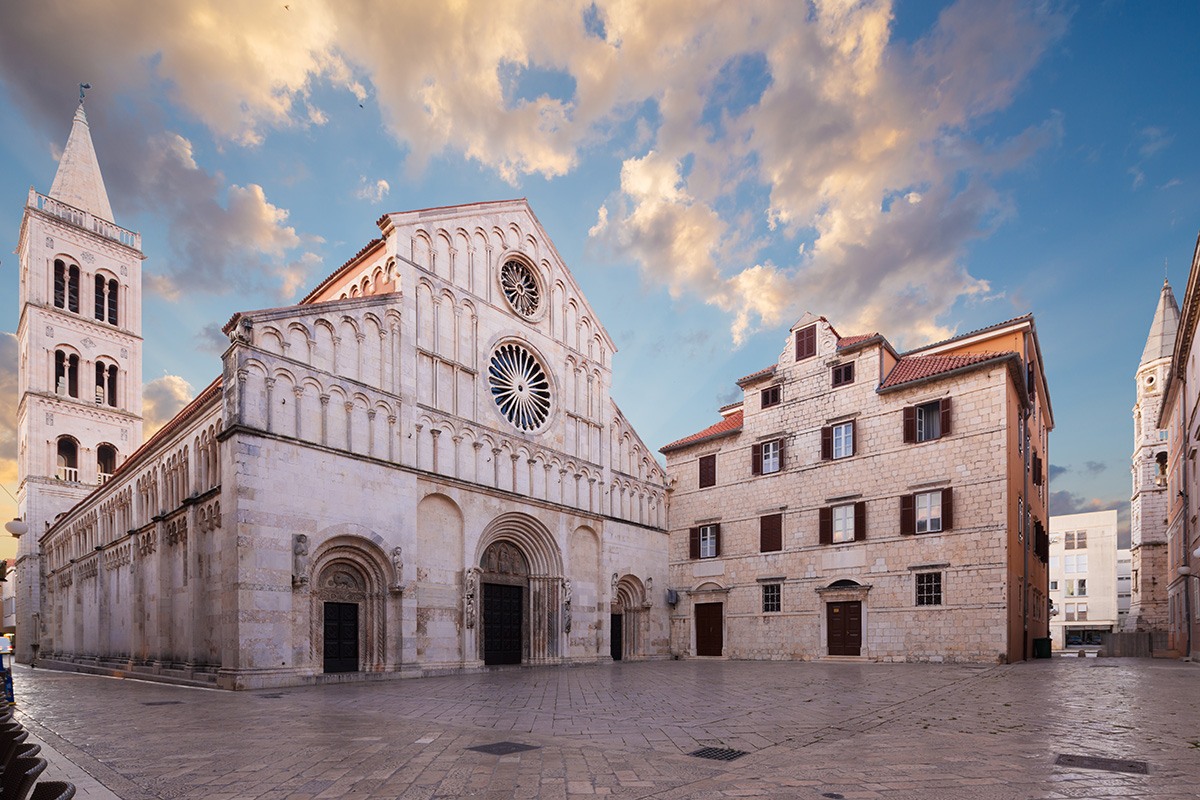 The cathedral was significantly damaged in 1202 when the Venetians, with the help of the Crusaders, conquered and destroyed the city of Zadar. The cathedral embodies the wound of a destructive conquest in which it was destroyed together with Zadar. But also the will for renewal, life, and freedom. It unites the old and the new. Zadar is unthinkable without a cathedral, urban and spiritual. She is one of the unavoidable components of its appearance and decoration.

4. Cathedral of the Assumption of the Blessed Virgin Mary, Zagreb 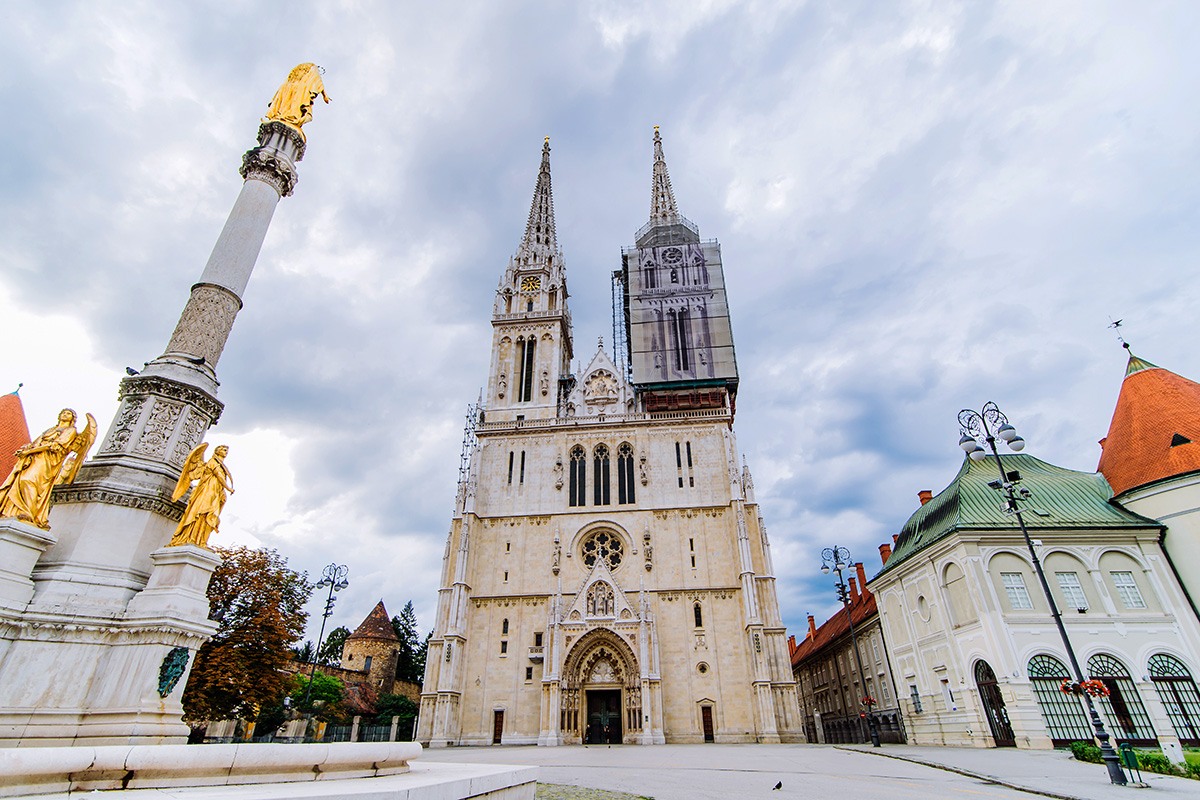 Zagreb cathedral is the largest and most monumental Croatian sacral building. And one of the most valuable monuments of Croatian cultural heritage. The cathedral testifies Zagreb as a strong Central European cultural center. The cathedral has been demolished and rebuilt many times. In 1242, in their invasion, the Tatars almost completely demolished the cathedral. After which in 1254 the construction of the cathedral began again. Shortly after a large bell tower was built, the cathedral was hit by two fires which caused enormous damage.

In 1880, when a great earthquake struck Zagreb, the vaults of the cathedral were demolished, and the building itself was significantly damaged. In 1902, a neo-Gothic renovation began. The cathedral gets its present appearance with two high bell towers, a high roof, new pillars in the sanctuary, new altars, and a tomb for the Zagreb archbishops behind the main altar. 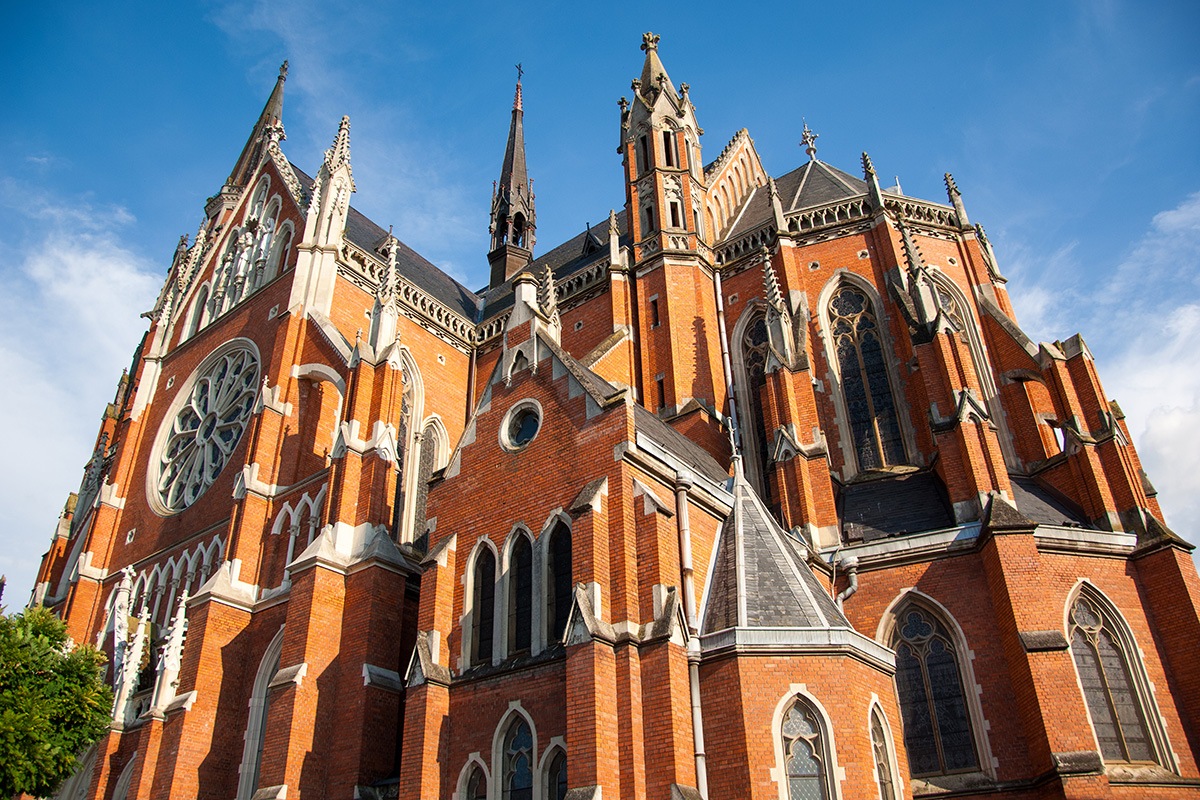 One of the most impressive Croatian sacral buildings is the cathedral of St. Peter and Paul in Osijek. Unlike other important Croatian cathedrals, this one is just over a hundred years old. At the initiative of Bishop Josip Juraj Strossmayer, in 1894,  construction of St. Peter and Paul’s cathedral begin. After the demolition of the older baroque church, it took just four years to complete the cathedral. Since 1898 the panorama of Osijek is unthinkable without its 90-meter-high bell tower, today the second tallest in Croatia and Southeast Europe. Cathedral was built of red facade brick, in the neo-Gothic style. During its short history, it has unfortunately been damaged several times. Mostly during the Croatian War of Independence. The aggressor’s grenades hit it directly more than a hundred times, so in 1994 reconstruction began. The reconstruction continues to this day. 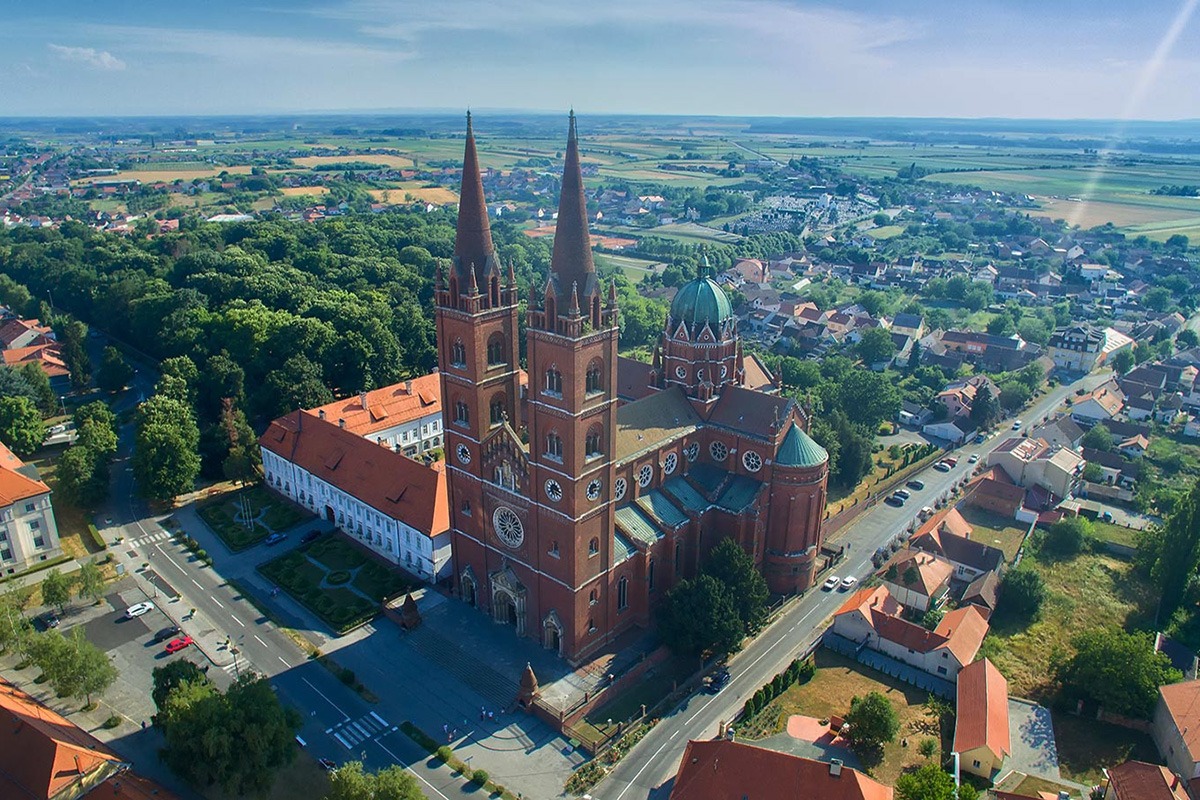 The cathedral of St. Peter in Đakovo is a construction masterpiece. Magnificent symbiosis of interior and exterior. Gothic and Romanesque styles are perfectly intertwined. Pope John XXIII. said that this is the most beautiful cathedral between Venice and Constantinople. After the first one from the 14th century, which Turks destroyed. And the second one, built in the early 18th century in the Baroque style. The cathedral was completed in 1882, after 16 years of construction. There are 7 altars and numerous sculptures in the cathedral. The entire interior of the cathedral, the walls, vaults, and pillars, are richly decorated with various ornaments. But the greatest treasure of the cathedral is its exceptional frescoes. Strossmayer hired the best painters of the time to make them. The cathedral has preserved its original appearance although it has suffered much destruction throughout history. 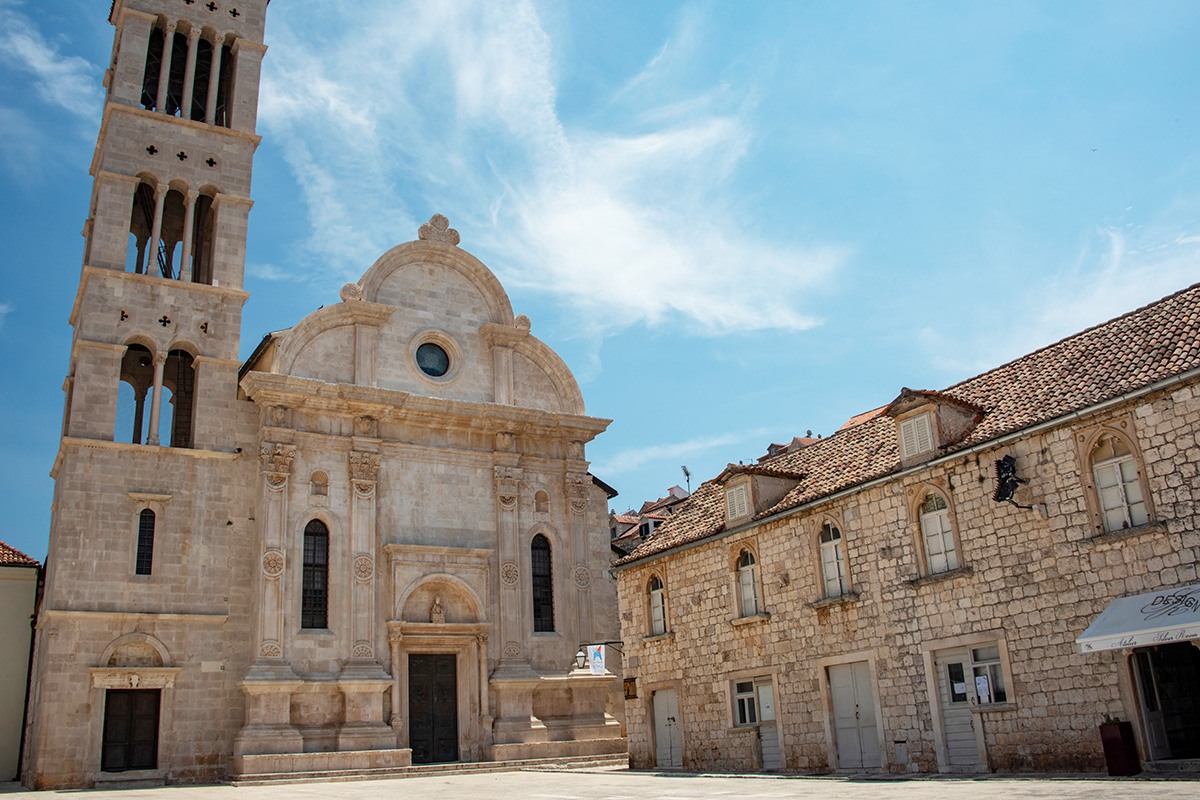 If you visit Hvar, all roads will take you to Hvar Square. The center of the public and social life of the city. The east side of the town square is near the cathedral of St. Stephen, built on the foundations of an early Christian church from the 6th century. It was originally the church of a Benedictine monastery. The Turks burned and demolished the cathedral in 1571. The presbytery remained, which retained its old Gothic form.

Cathedral got its present appearance through the 17th and 18th centuries and represents a synthesis of Gothic, Renaissance, Mannerist and Baroque styles with Romanesque overtones, visible in the design of the bell tower and canopy above the entrance portal. The recognizability of this church is the Renaissance bell tower, which is certainly one of the most beautiful examples of its kind in the Dalmatian area. 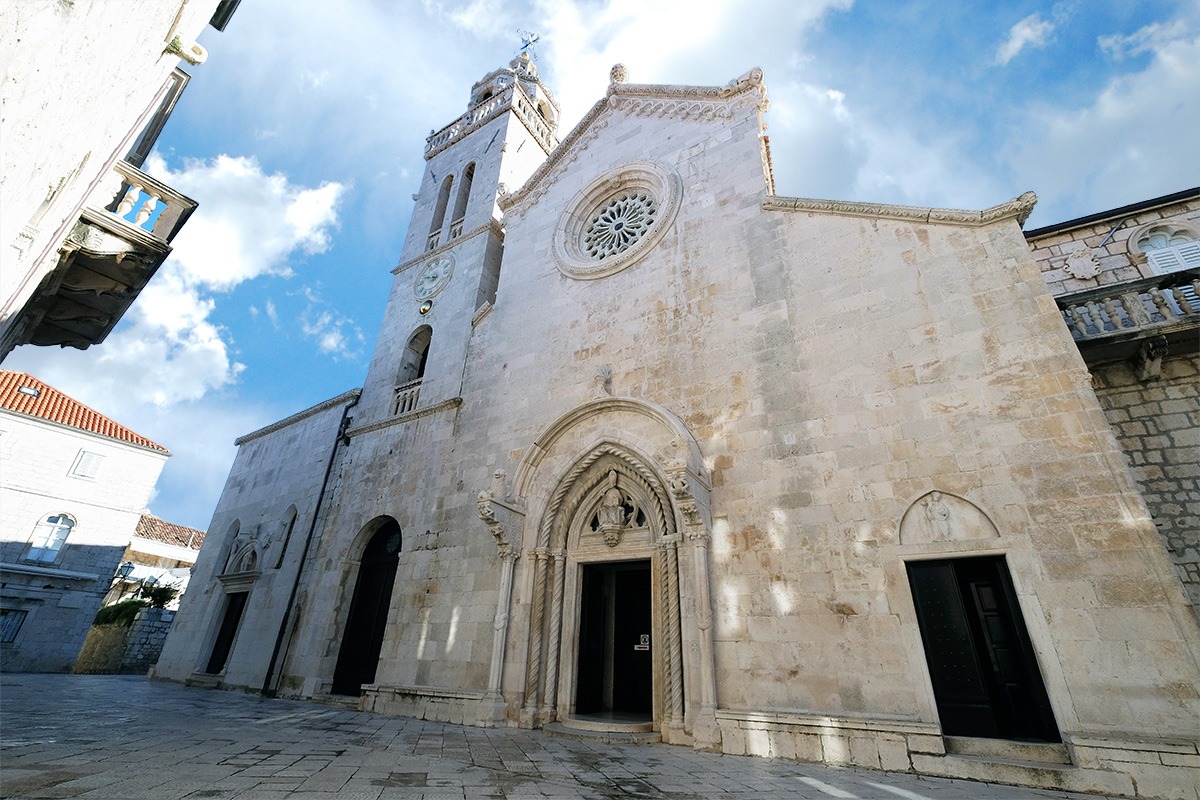 The Cathedral of St. Mark is the center of religious life, one of the most significant and most beautiful monuments in the old town of Korčula. Cathedral complements the unmatched beauty of the town and the island. The stone lady, with her dignified beauty, captivates every traveler who sees the horizons of Korčula for the first time. Italian masters build the cathedral, but mostly by local builders through the 14th, 15th, and 16th centuries. The facade of the cathedral is stylistically diverse and at the same time monumentally unique. It testifies about the golden age of stonemasonry and architectural skills of the town and the island of Korčula. The styles observed in the cathedral alternate from Romanesque through Gothic, Renaissance, and Baroque. Several generations of stonemasons worked at the cathedral, and each left the mark of its time. 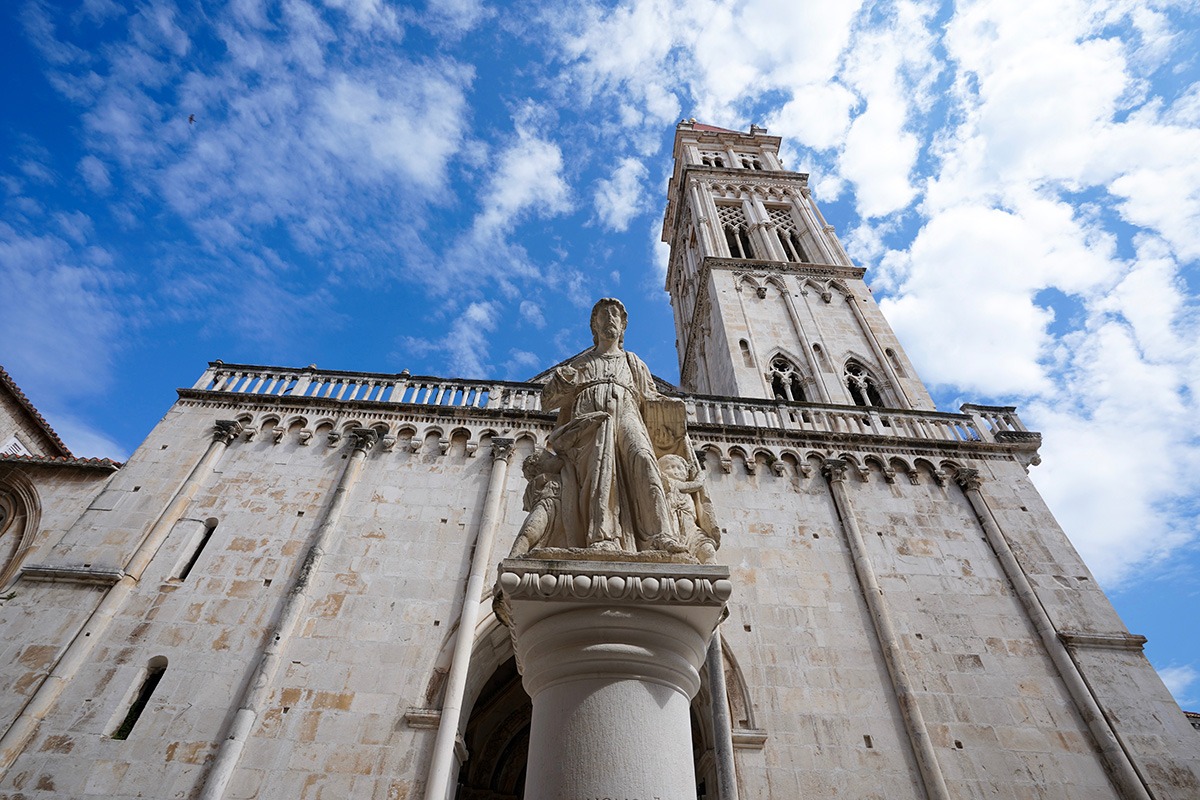 Trogir cathedral of St. Lawrence is one of the most famous monuments in Trogir and it is under UNESCO protection of world heritage. Styles from Romanesque to Baroque are noticeable on the cathedral, and there are valuable works of art in it. Construction of the cathedral began in 1213 on the foundations of an early Christian cathedral destroyed by the Saracens in 1123. Construction of the cathedral ends in the early 17th century. Like the previous one, this one is also dedicated to St. Lawrence. The bell tower shows a long period of construction. The main entrance to the cathedral leads through the famous portal. Built in 1340 and represents the most significant example of Romanesque-Gothic art in Croatia. Trogir cathedral looks enchanting, even when we look at the photos. To experience it, you definitely have to visit it.

Want to visit some of these cities and these glorious structures? Find accommodation on Visitteo.