For Diocletian’s Palace, the best-preserved late-ancient complex in the world. A synonym for the old town of Split, there are so many questions about the exact time of its construction and the death of Diocletian. The Roman ruler who had it built. With its size and preservation, the palace is one of the most important monuments of late Roman architecture.

Let us give you a short intro first. Diocletian was a Roman Emperor born in Salona – the capital of the Roman province of Dalmatia. The massive palace was built as a preparation for his retirement. So, upon returning to his homeland he moved into the expensive fortified palace. Around later on the city of Split formed. After the death of Diocletian, the palace was abandoned by the Romans. The palace was empty for several centuries when its new residents started making their homes and workshops inside the walls.

Diocletian was buried in his palace. His tomb was later turned into a Christian church. The Cathedral of St. Domnius, which is still standing nowadays. Because of the fact that Diocletian persecuted Christians, while the palace wasn’t in use anymore, they came back and destroyed all images and signs of Diocletian. Afterward, many other sights were destroyed and built upon. They replaced Roman-era imagery with Christian imagery. In November 1979 UNESCO declared the palace remains a World Heritage site as an important archeological complex. 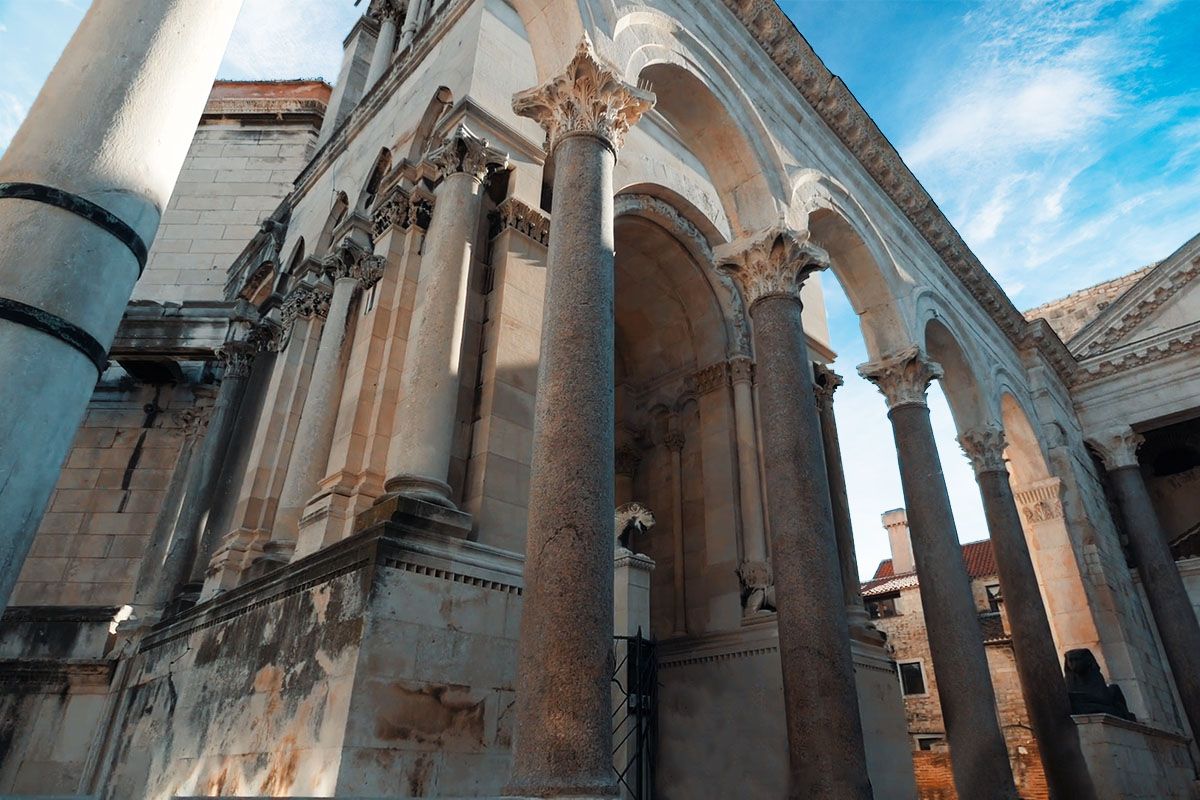 Diocletian’s Palace in Split is one of the most significant ancient buildings in Croatia and one of the best-preserved monuments of Roman architecture in the world. The palace was built by Emperor Diocletian as his imperial mansion in which he intended to spend his old age. The choice of this location was prompted by the mild climate, thermal water springs and the abundance of stone for construction, as well as the excellent location.

Construction was completed probably in the late 3rd century. Due to the danger of possible barbarian raids, it was built on the model of a military camp – Castrum. In the shape of a rectangle with four large towers at the corners and four doors. The palace was surrounded by large ramparts. And the gates were the entrances to the palace – three gates on the land side and one on the seaside. 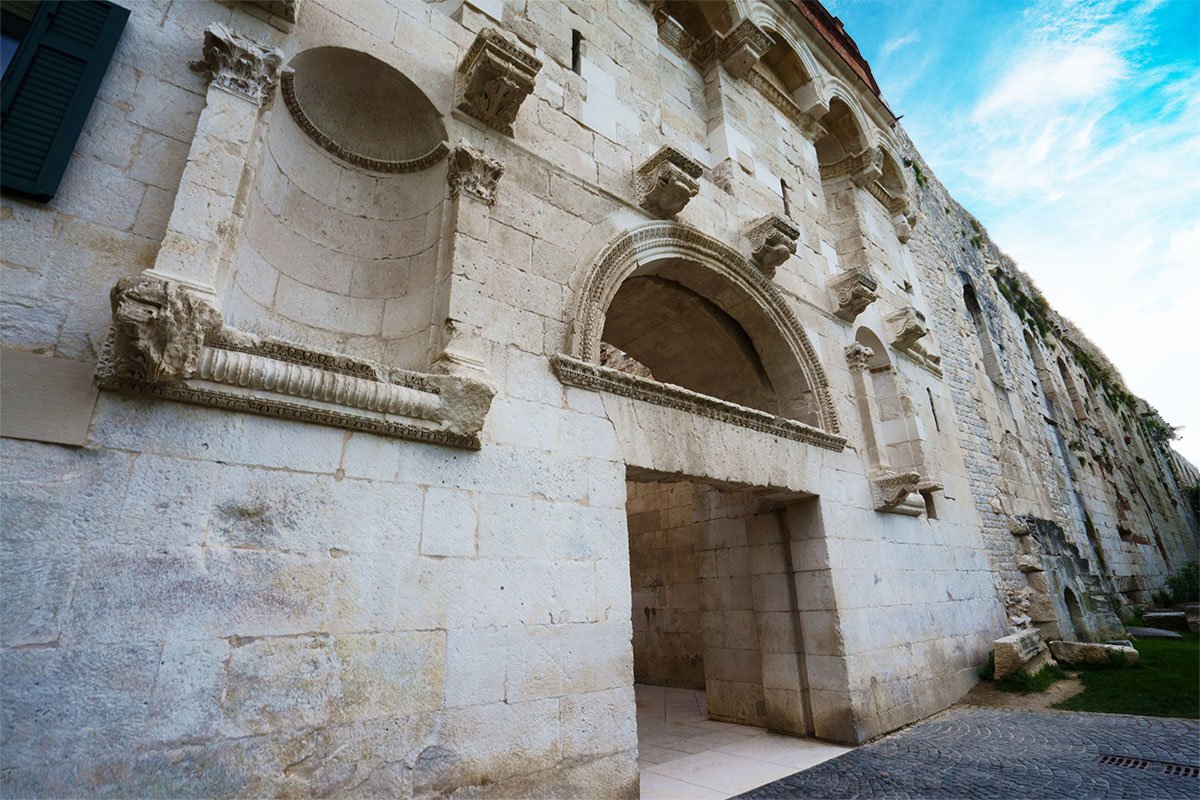 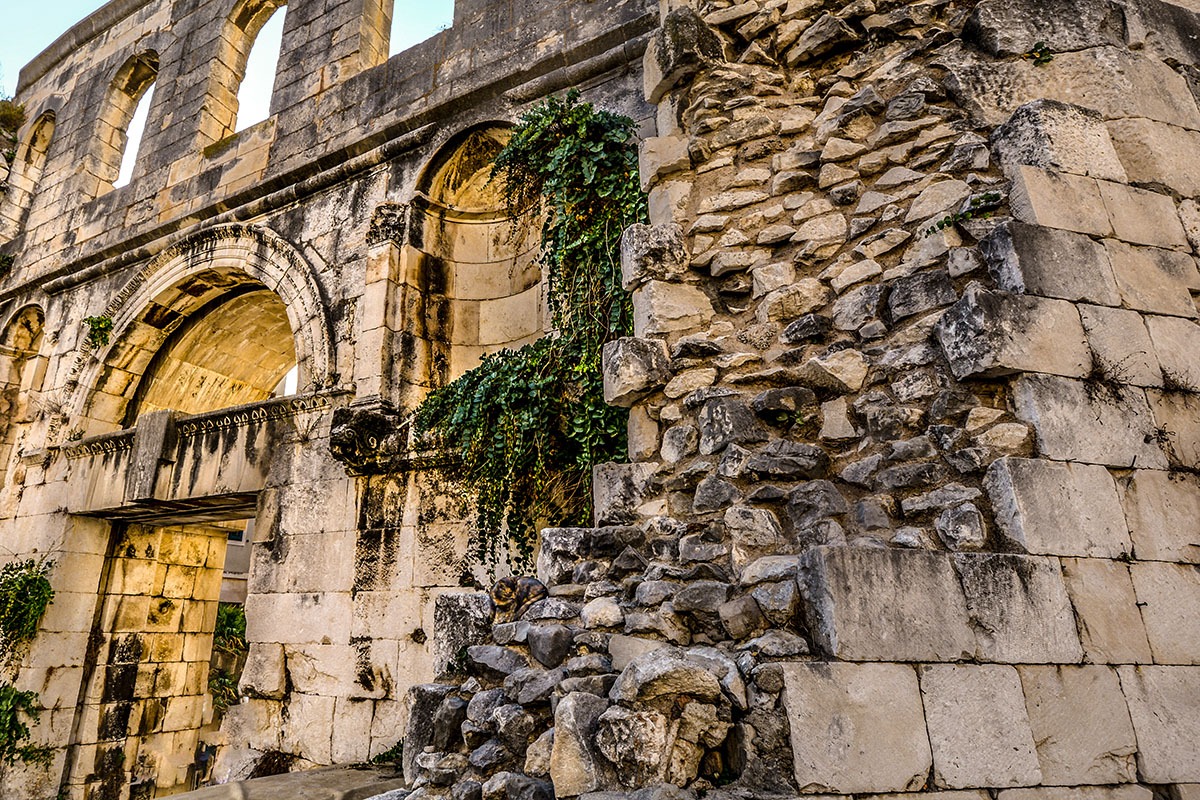 From the palace to the city

After Diocletian’s death, the palace underwent numerous changes. But it remained beautifully preserved and is considered one of the most significant Roman monuments in the world. It is especially interesting that this is a place that has been permanently inhabited ever since. In which people live and adapt to life, so even today it is actually still developing and changing. Diocletian’s Palace was transformed into a city in a unique, creative and original way. At the time when the palace was built, the city of Split did not exist. Split arose from Diocletian’s Palace through alterations and additions.

The way that this occurred is almost fascinating. A particularly beautiful and visible example is the Peristyle. A spacious square that connects the northern and southern parts of the city. Where inside the ancient pillars are embedded facades and facades of Romanesque, Gothic, and later Renaissance and Baroque buildings and palaces. An interesting example of the conversion of the palace is the former octagonal imperial mausoleum, which was turned into a cathedral by adding a Romanesque bell tower. 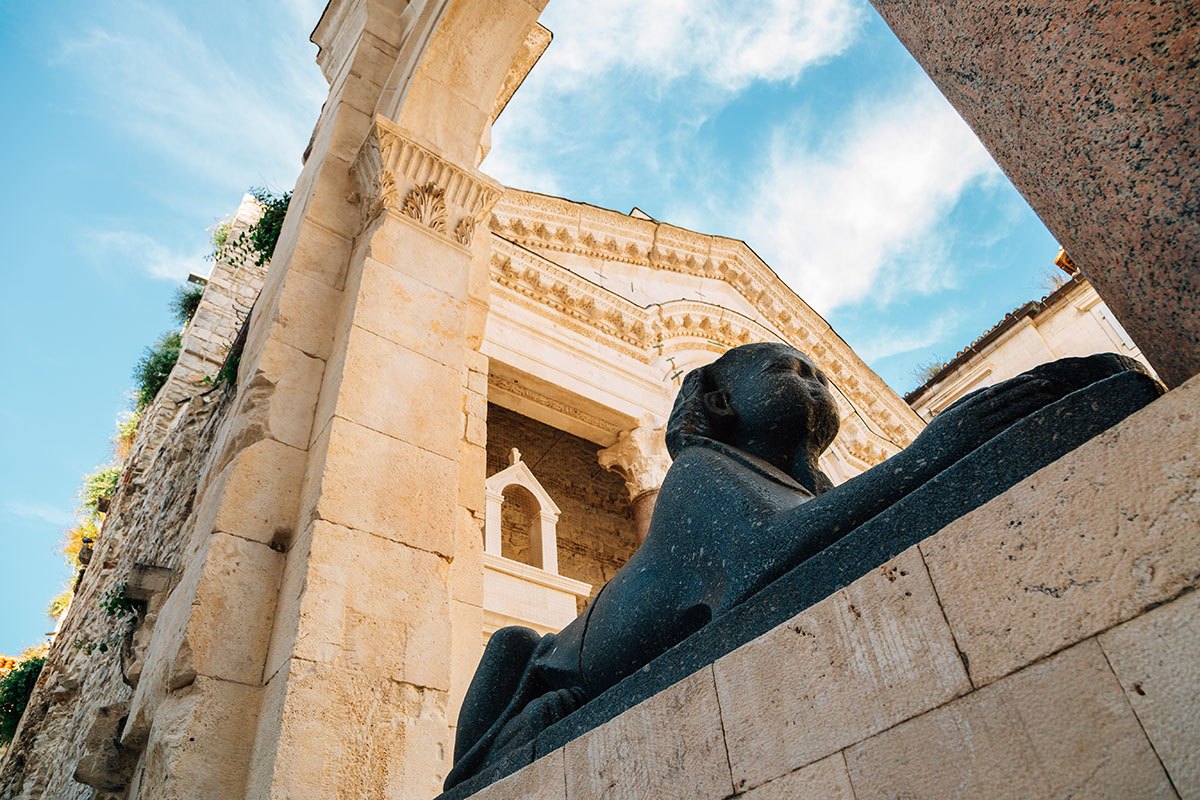 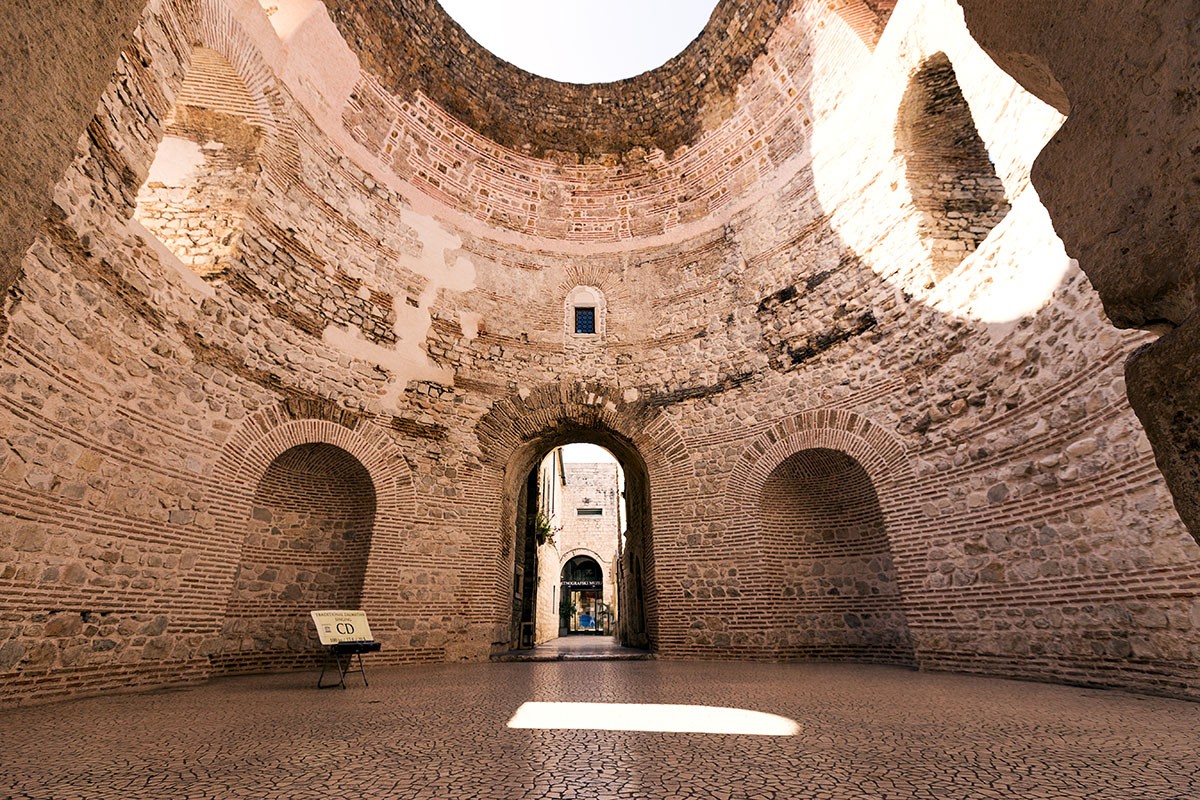 In Roman architecture, a peristyle is an open colonnade surrounding a court. Hence the name of the central court in Diocletian’s Palace is called Peristil. It is located at the intersection of the two main streets, cardo and decumanus . The nucleus of historical sites is found here. With the protiron, sphinxes, vestibule and various palaces. Also with the imposing Cathedral of St. Domnius, and Diocletian’s mausoleum.

The peristyle is the central square of Diocletian’s Palace. Located in the part where several temples were built. It was intended for the emperor Diocletian, celebrated as the living son of Jupiter. The emperor appeared under the architrave arch of the central part of the protiron. His subjects approached him, kneeling kissing the skirts of his crimson cloak. Or falling prostrate before him, lying with his whole body on the ground. 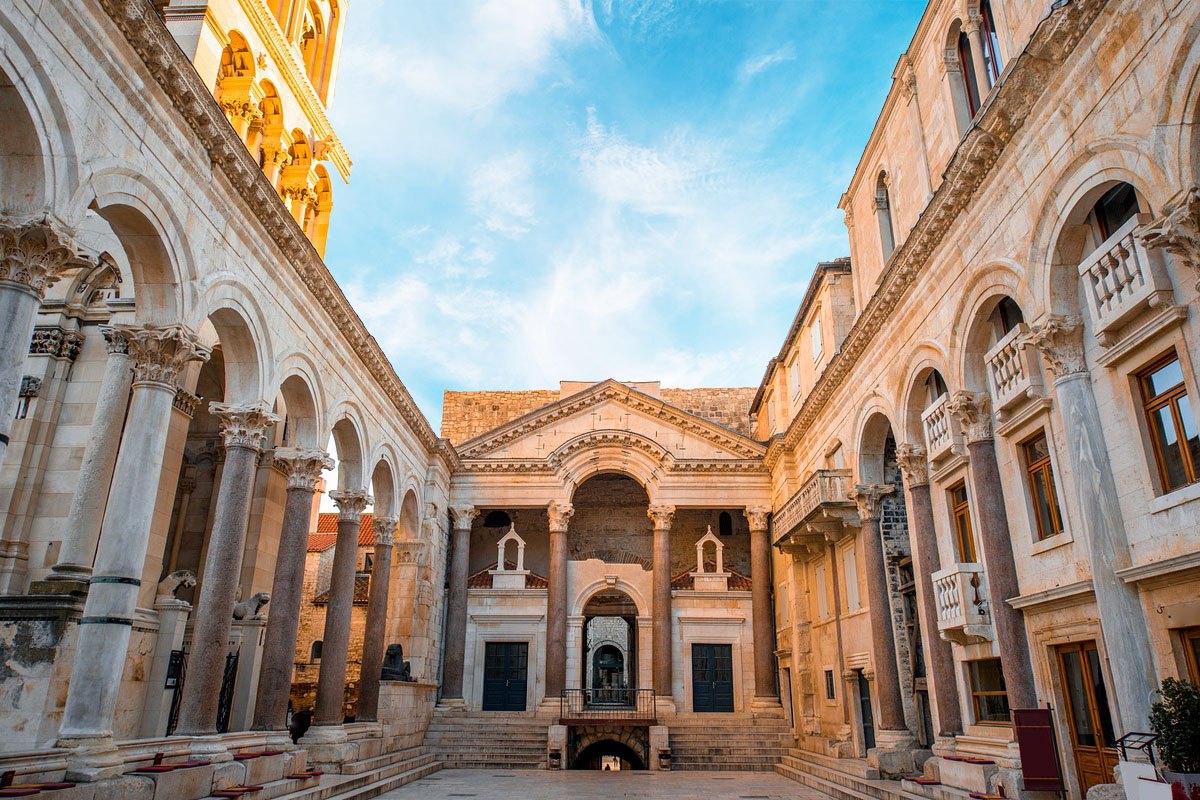 The basements of Diocletian’s Palace are one of the best-preserved ancient complexes of this kind in the world. And they are very responsible for the fact that the historic core of Split was included in the UNESCO World Heritage List in 1979. In Roman times, their function was to elevate the spaces of the emperor’s apartment on the upper floor. But they were also the storage space of the Palace. As they are structurally faithful copies of the upper rooms, they enable a quality reconstruction of the appearance of the imperial chambers. The walls served as the foundations of the imperial residential buildings. So the shapes of their rooms matched the shape of the buildings that disappeared above the surface. Basements are used today as attractive fair and exhibition spaces. And the popular television series Game of Thrones was filmed in them. 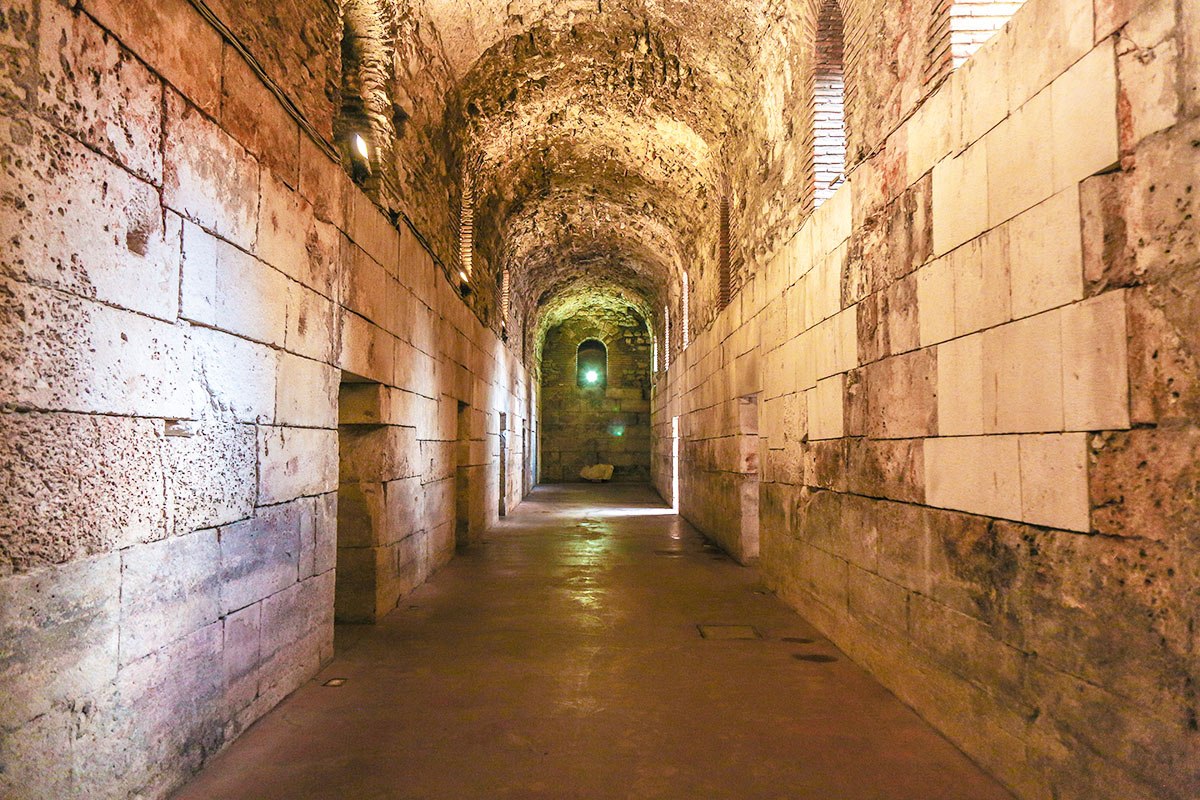 Quality accommodation in Split is easy to find. Split has something for everyone. Because of the mild climate, Split is a desirable destination in every season. The vicinity of the sea and mountains provides countless opportunities for recreational activities and entertainment for all ages. If we add to that the Diocletian’s Palace, historic old town, the amazing promenade, clean beaches, green parks, great restaurants and plenty of cultural events. We get a city created for relaxation, full of activities and entertainment opportunities.

You can find accommodation in Split on Visitteo. Compare prices of hotels, apartments, rooms, studios, villas, and many other types of accommodation.